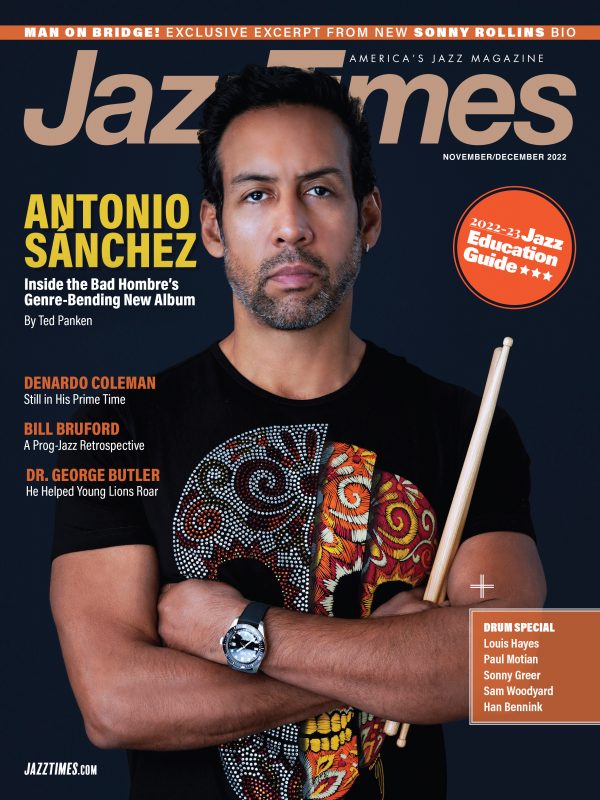 SONNY ROLLINS
The years 1960 and 1961 were a crucial transition period for Sonny Rollins; you could call them his bridge years (as in Williamsburg Bridge). In an excerpt from his definitive new Rollins biography, Aidan Levy digs deep into the saxophonist’s psyche as he prepared to return to jazz.

DR. GEORGE BUTLER
A gifted producer and A&R man, George Butler coaxed Miles Davis back into the spotlight, played a key role in the ascent of Wynton Marsalis, and spurred on the young lions of the 1980s and ’90s. Then he disappeared from the business. What happened? John Murph finds out.

BILL BRUFORD
He’s played jazz, he’s played rock, and he’d be ecstatic if those two genre signifiers were never allowed to be used in polite conversation again. In light of a recent multidisc career retrospective, the ever-engaging Bruford talks to Jim Farber about investigating boundaries.

DENARDO COLEMAN
We still know Denardo best as Ornette’s son and the guardian of his legacy—and he’s fine with that. But he’s got bigger plans: to expand his father’s harmolodic work and take it global. A.D. Amorosi catches up with the drummer who considers himself a “different kind of point guard.”

ANTONIO SÁNCHEZ
The head honcho of Bad Hombre is a virtuoso drummer and visionary composer who’s constantly expanding the possibilities of his instrument. He’s also, as Ted Panken discovered recently, a real sweetheart.