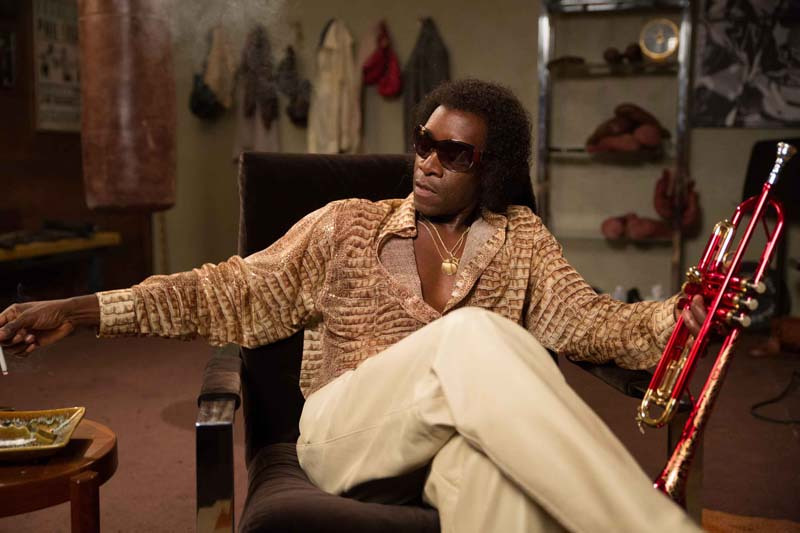 The first time Don Cheadle lifts a horn to his lips in Miles Ahead, there’s an immediate smash cut to squealing tires and gunshots. That single moment offers a snapshot of Cheadle’s misguided kinda-biopic, which looks insistently away from Miles Davis’ musical genius to focus on an action-movie fantasy that fails to offer any insights into the legendary trumpeter as either an artist or a human being.

In a sense, it’s admirable that Cheadle should so vehemently avoid a boilerplate cradle-to-grave biopic; Davis, after all, was a stubbornly unconventional artist whose attitudes and contributions would seem to refute such a tired and predictable genre. But it’s hard to imagine him finding much interest in Cheadle’s invented heist scenario, which would feel equally trite if not for the oddity of its central figure. The action itself is familiar and dull, other than the fact that instead of Jason Statham or Wesley Snipes aiming a gun, it’s one of the most innovative and influential voices of modern music.

While the filmmaker’s intentions remain somewhat obscure, it’s conceivable that Cheadle saw Miles Ahead as an impressionistic vision of Miles’ own feelings about his perception and place in the popular culture of the time and his exploitation at the hands of unscrupulous hangers-on. Charles Mingus once imagined Charlie Parker as a gunslinger taking out his copycats, so why not picture Miles Davis as a music-business vigilante?

The problem with that interpretation is that the first-time director doesn’t go far enough into the absurd to pull it off. The bulk of the film takes place in the space of a single Miles solo, as he plays his trumpet in lieu of responding to an interviewer’s queries. The narrative, then, becomes an act of personal expression in which Miles avenges himself against duplicitous journalists, craven record execs and pretenders to his musical throne.

Cheadle’s performance is indicative of the tone: not quite caricature, but too broad to be entirely convincing. It’s built entirely on mannerisms: the rasp, a steady stream of “motherfuckers,” a limp seized on and transformed into a Blaxploitation swagger (a mention of Davis’ hip replacement surgery seems added only to justify that exaggerated strut). Cheadle’s never been an actor known for broad gestures. His reputation hangs on quiet moments and inner life, and his subtlety gets buried under the bizarre trappings of this profane golem.

The story is set in 1978, with a reclusive Miles deep into his five-year recording hiatus. He’s lost his chops and spends his days hiding away in his dank, shuttered New York City home, watching old fights on television, haranguing radio DJ Phil Schaap for only playing his older material and conjuring the specter of his ex-wife Frances.

Into this hermitage bursts a scruffy journalist played by Ewan McGregor, who becomes Miles’ sidekick and the audience’s incredulous (and, naturally, white) surrogate on the adventures to come. The plot centers on the duo’s attempts to retrieve a stolen session tape, planned to be Davis’ comeback release. Along the way they run afoul of a cartoonishly sleazy A&R man (Michael Stuhlbarg) and a rising young trumpeter (Keith Stanfield) not above betraying his idols.

Throughout, Miles pines for the lost Frances (Emayatzy Corinealdi), who becomes the focus of his frequent rhapsodies. His creative life takes a definite backseat to his romantic one: The Second Great Quintet is seen only once, rehearsing uncomfortably in Davis’ basement while the couple argues upstairs; John Coltrane is mentioned one time as well, in passing; and Gil Evans and Teo Macero make cameo appearances during a Sketches of Spain recording session interrupted by a phone call from a traveling Frances.

This brief glimpse into the studio offers a tantalizing taste of what might have been. During the scene I couldn’t help but be reminded of last year’s wonderful Brian Wilson biopic, Love & Mercy, which ably split its time between its subject’s personal and professional life. The few past incidents feel ticked off of a checklist: A racially motivated arrest (by a beat cop out of a 1950s sitcom) and a bout of domestic abuse with Frances are so out of place with the film’s off-kilter tone that they seem like obligatory acknowledgements rather than organic storytelling. They’re scenes from a more conventional biopic that feel shoehorned in here.

The fact that they do feel out of place is almost refreshing, reflecting the way that Miles Ahead deviates from the expected. But instead of redirecting to the facets of his life that make him so fascinating, Cheadle falls back on a gauzy love story and a wholly invented thriller that goes nowhere loudly. Unenlightening as biography and uninspired as fantasy, it can’t help but feel like a missed opportunity.

This article will also appear in the forthcoming May 2016 print edition of JazzTimes.

“It’s a little nest of happiness. All the recent wounds are all healed here …  because there’s always somebody blowing something beautiful and blowing a … END_OF_DOCUMENT_TOKEN_TO_BE_REPLACED

There is an abiding paradox to the life of Billie Holiday, which is the core tenet of her art: In theory you should feel bad … END_OF_DOCUMENT_TOKEN_TO_BE_REPLACED