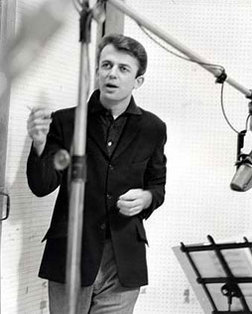 F. Scott Fitzgerald wrote, “There are no second acts in American lives.” On Nov. 2, 1971, Gary McFarland died under mysterious circumstances at the 55 Bar in Greenwich Village. He was 38. Apparently he ingested a lethal dose of liquid methadone. It will never be known whether he took the drug on purpose or whether someone spiked his drink. Inexplicably, the police never investigated.

McFarland was a gifted composer, arranger, vibraphonist and producer. He was self-taught and started late. In his 10-year career, his most important achievements were his orchestral albums, including the Impulse! LPs Profiles, from 1966, and The October Suite, released the following year and featuring pianist Steve Kuhn. They are as formidable, and as majestic, as the great works of Gil Evans.

In the jazz culture, the archival instinct is powerful. Kristian St. Clair was a journalism student at the University of Washington in the late 1990s when he became obsessed with McFarland. His day gigs have been with Amazon and Microsoft. As a documentary filmmaker, he is, like McFarland, mostly self-taught.

Though this DVD/CD package was released late last year, the film premiered in 2006, and the director conducted his first interviews in 2000. When you begin making a film about someone dead for 30 years, it is both detective work and a race against time. St. Clair unearthed valuable artifacts: Grainy footage of McFarland conducting the Stan Getz Orchestra on a long-forgotten TV program, The International Hour; radio interviews (one with Hugh Downs); a hilarious, goofy Fresca commercial, McFarland leading blissful, cooing singers, engulfed in fake snow. Inevitably, there were crushing disappointments. McFarland’s two appearances on The Tonight Show Starring Johnny Carson had been erased by a cost-conscious NBC bean-counter.

The film, as finally assembled, is a montage of haunting visual and aural imagery. Still photographs come in waves: family scrapbooks; army portraits; vivid performance shots by Chuck Stewart. There are newspaper clippings, album covers and a joyous home movie of McFarland’s 1963 wedding to Gail Frankel. Everything is set to a soundtrack of McFarland music, always life-affirming but with whispers of melancholy. There are some beautiful vignettes. Bill Evans’ crystalline “Gary’s Waltz” is worth the price of admission to this movie.

The core of St. Clair’s work is a series of interviews with key figures from McFarland’s short life and extraordinary times. Many have now passed: Gene Lees, Herb Pomeroy, Joe Beck, Bob Brookmeyer. The most moving interview is with Gail, McFarland’s late widow. What emerges is a composite portrait of a man who was “beloved as a genius, and a fuck-up” (Grady Tate), a man who “could resist everything but temptation” (Steve Kuhn). The most heart-rending moment comes when stark text states that Gary’s son Milo died of a heroin overdose in 2002. He was the same age as his father at his death.

This package also contains a CD of newly discovered music from 1965, well recorded by radio host Jim Wilke at the Penthouse, a Seattle club long gone. Saxophonist Sadao Watanabe, guitarist Gabor Szabo and bassist Eddie Gomez are in the band. There are original bossa-nova grooves (“Train Samba”), rapt standards (“I Thought About You”) and two Beatles covers. McFarland’s touch makes everything glow.

A project like this one is an attempt to save one precious piece of the past from the merciless onslaught of time. That all such attempts are doomed to failure by definition does not make them less worthwhile.

“It’s a little nest of happiness. All the recent wounds are all healed here …  because there’s always somebody blowing something beautiful and blowing a … END_OF_DOCUMENT_TOKEN_TO_BE_REPLACED

There is an abiding paradox to the life of Billie Holiday, which is the core tenet of her art: In theory you should feel bad … END_OF_DOCUMENT_TOKEN_TO_BE_REPLACED