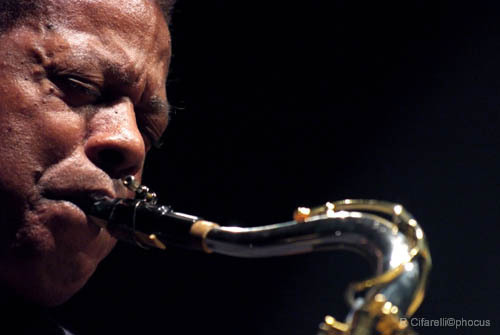 About half an hour into this roughly 90-minute concert by the Wayne Shorter Quartet, filmed in Paris in 2012, the bandleader suddenly glances over at drummer Brian Blade, who appears to be having the time of his life. Shorter stops playing his soprano saxophone, closes his eyes, takes a breath that’s more meditation than exhaustion, then rolls up his sleeves. He’s ready for more. With bassist John Patitucci playing alternately fierce and placid arco, Blade skipping merrily through a rack of shimmery percussion and pianist Danilo Pérez mechanically repeating a theme, Shorter shakes his left hand as if eliminating excess sweat, places his fingers back on his instrument and blows the sweetest, most pastoral soprano sax solo you’ve ever heard.

This all occurs as the quartet, filmed largely in closeup shots at Salle Pleyel, is transitioning from an epic “Zero Gravity/Lotus” into “Prometheus Unbound,” a piece that Shorter has, in recent years, been performing with orchestras. They don’t need the ancillary instrumentation: The composition’s grandeur comes through just as convincingly without it, and remains in place throughout the rest of the performance-in “Starry Night,” another near-half-hour specimen of exploration at its most golden, and “Joy Ryder,” the all-too-brief show-closing bit that allows each musician to get as batty as he wants to get.

The concert is outstanding, but it’s actually considered the bonus material. The Language of the Unknown (ArtHaus Musik) itself is an hour-long documentary, directed by Guido Lukoschek, that delves into the psyche and methodology of Shorter via interview material (Shorter, the ubiquitous Herbie Hancock and others) and analysis. As anyone who’s ever read or witnessed an interview with Shorter is aware, his mind, much like his music, follows a path others might never understand. He’s a genial, thoughtful man who takes his role as innovator and icon seriously, but he finds just as much joy in a story of neighbors who did their housework to his 1966 tune “Adam’s Apple.”

Whether the titular half of the DVD is useful in providing an understanding of the man and his music is negligible and ultimately unimportant; it’s entertaining and informative but not revelatory. For that there’s the music, and the Paris concert is a shining example of one of jazz’s most consistently brilliant outfits at its creative peak.

“It’s a little nest of happiness. All the recent wounds are all healed here …  because there’s always somebody blowing something beautiful and blowing a … END_OF_DOCUMENT_TOKEN_TO_BE_REPLACED

There is an abiding paradox to the life of Billie Holiday, which is the core tenet of her art: In theory you should feel bad … END_OF_DOCUMENT_TOKEN_TO_BE_REPLACED