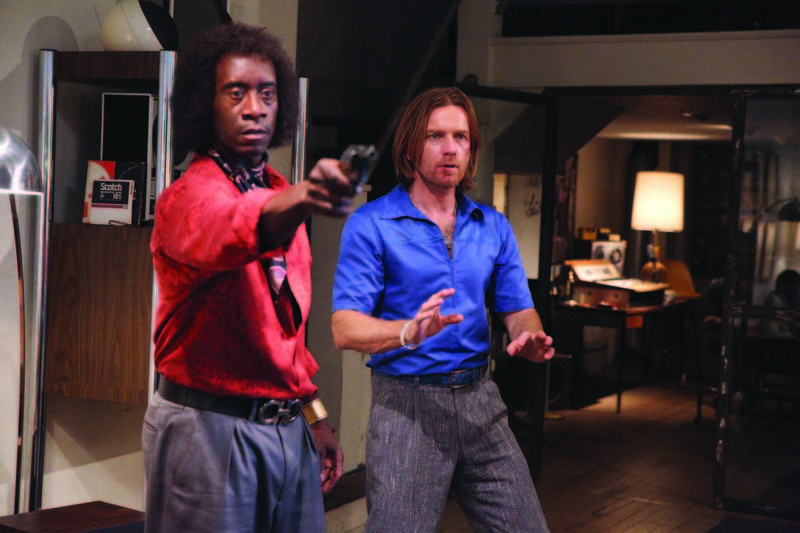 If Miles was a gunslinger: Don Cheadle (left) and Ewan McGregor take liberties in "Miles Ahead"

Miles Ahead, the recent cinematic portrait of Miles Davis starring, co-produced, co-written and directed by Don Cheadle, has drawn considerable controversy within the jazz community. Some diehards, expecting a straightforward biopic, were dumbfounded when Cheadle instead created a heist movie. Set during Miles’ late-’70s hiatus from music, the trumpeter, joined by a fictional wannabe Rolling Stone reporter (Ewan McGregor), chases a stolen tape of never-before-heard sounds, all while battling memories of his lost love, Broadway dancer Frances Taylor (Emayatzy Corinealdi). So it’s no surprise that the features on the Miles Ahead Blu-ray and DVD mostly serve as a clarification of Cheadle’s vision.

In the featurette The Truth: Becoming Miles Davis, Cheadle discusses how he intended his feature directorial debut to “feel like creativity itself. … I want to do with my medium what Miles did with his.” His execution of the project is heralded by Miles’ son Erin Davis, who says Cheadle “made a movie Miles would have wanted to have been in,” and drummer/co-producer Vince Wilburn Jr., Davis’ nephew, who recalls pianist Herbie Hancock and saxophonist Wayne Shorter’s comments that Cheadle “even stands like [Miles].” The film’s musical inventions are explored by keyboardist and score composer Robert Glasper, who says that if Miles were alive today, “I have no doubt [he] would have been on To Pimp a Butterfly,” last year’s landmark hip-hop album by Kendrick Lamar. The disc also includes a Q&A session from the film’s 2016 Sundance screening, in which Cheadle discusses the difficulties of making such an ambitious film on an $8 million budget, as well as his trials in playing the trumpet, “one of the meanest instruments” in jazz, for the role.

The film can likewise be viewed with a commentary track featuring Cheadle and his co-writer, Steven Baigelman, who reinforces the filmmakers’ intention of “pushing back against the traditional biopic.” The commentary digs deep into the picture’s incorporation of Davis tracks, particularly “Nefertiti,” strikingly utilized as the sole accompaniment to a scene of domestic warfare between Miles and Frances.

Cheadle celebrates the brilliance of the musicians who performed the score, noting a basement-rehearsal scene in which Glasper, trumpeter Keyon Harrold (whose sound here doubles for all eras of Miles) and others had to match their improvising to filmed movement from Cheadle and actors playing Hancock, Shorter, bassist Ron Carter and drummer Tony Williams. Both commentators also have emphatic praise for the all-star unit-Glasper, Hancock, Shorter, drummer Antonio Sanchez, bassist Esperanza Spalding and guitarist Gary Clark Jr.-that joins Cheadle’s presence and Harrold’s sound for the exultant final concert scene.

At one point, Cheadle cites a line, spoken by Miles to a studio of onscreen musicians, that became the project’s mantra: “Be wrong strong.” To some, Cheadle’s unconventional take on Miles’ life and music was indeed wrong. But Cheadle took the kind of chances his subject would have. The result, crisply presented in Sony Home Entertainment’s exacting audiovisual transfer, may not give you all the facts, but it offers something just as vital: the feeling of Miles.

“It’s a little nest of happiness. All the recent wounds are all healed here …  because there’s always somebody blowing something beautiful and blowing a … END_OF_DOCUMENT_TOKEN_TO_BE_REPLACED

There is an abiding paradox to the life of Billie Holiday, which is the core tenet of her art: In theory you should feel bad … END_OF_DOCUMENT_TOKEN_TO_BE_REPLACED