Skip to content
Become a member and get exclusive access to articles, live sessions and more!
Start Your Free Trial
Home > Reviews > Tony DeSare: Under the Hood 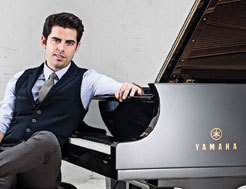 The piano has long been one of music’s most versatile instruments. But on his fourth and latest album, jazz and pop pianist-singer Tony DeSare stretched the limits of his Yamaha DC3 Disklavier Pro even further, coaxing the gentle thump of a bass drum by pounding his fist on the frame, or picking the strings to provide a gentle acoustic guitar. The result is the aptly named PiANO (AJD), a collection of 11 originals and covers, some with rich instrumentation and arrangements, all recorded with only the acoustic grand piano.

Originally, DeSare intended to record just his piano parts and flesh out the rest of the arrangements with samples. “[But] any time I pulled up a synth sound-synth drums, synth bass-it sounded inorganic, like a cruise ship band, no matter what I did,” said DeSare, 38. “The only thing I liked was the pianos on the demo tracks. I started to think, ‘What if I did the whole thing on the piano?'”

A cover of Bon Jovi’s “You Give Love a Bad Name” became DeSare’s test case. To get the right bass guitar tone, he recorded the part with his Disklavier’s MIDI, close-mic’d the lower piano strings with an AKG C214 and created a loop of six to eight bass notes with Cubase 6 (run on his Intel Core i7 PC with 6 GB of RAM; he also used an RME Fireface UFX USB Interface). He played back the loop and recorded on top of it, using his fingers to mute the strings enough to limit the higher harmonics but keeping the notes ringing loud and clear, until he’d captured each one the way he wanted it. Once he had them down, he put the notes together and crossfaded them into a master take. Using the EQ, he removed everything over 1K and applied a Waves CLA-3A compressor and a bass frequency enhancer.

Since no Bon Jovi cover is complete without a guitar solo, DeSare recorded a few runs on his piano using an AKG C214 about 10 inches above the middle and upper strings. He added a Cubase guitar-amp simulator and used overdrive on the signal, utilized surgical EQ to downplay the less desirable frequencies and topped it off with delay and reverb.

There were times when DeSare let his imagination go, fixing round copper fittings onto fishing line and pulling it across the keys and strings, making it sound like the piano was coming apart at the seams. “I was fascinated with the whole process,” DeSare said. “It combined everything I loved-playing piano, audio technology and sound design.”

As much as he tried, certain sounds were out of DeSare’s reach. Wind instruments were impossible to reproduce, even when he cut the attack out of the notes and used the range of the piano. He imagined an accordion part for his song “New Orleans Tango” but eventually admitted defeat and used a piano line instead.

All but two songs were recorded in DeSare’s Manhattan apartment, which presented its own set of challenges. Since he couldn’t get a good room sound, DeSare close-mic’d the piano using the Earthworks PianoMic System; he left the lid open and draped it with moving blankets. At one point during the three months of recording, workers ripped up the street outside and put down metal plates at night. “Trucks would go by and it would sound like a herd of elephants going through,” he said. “I was cutting little bits and pieces during red lights.”

DeSare eventually had the piano moved from his living room to his bedroom and finished recording there. As he fleshed out his arrangements, he used pre-existing samples from Cubase and other libraries as guides. For the bass drum, he slightly lowered the sustain pedal and struck the piano’s front frame above the keys, closely micing it. He EQed the recordings with a little bass-frequency enhancer, and played the sound next to a sample of a bass drum for comparison.

Though David Kahne, who mixed PiANO, suggested DeSare release the samples for other musicians to use, DeSare isn’t convinced they’ll work as standalones. Whether or not they have a second life, they’ve shown DeSare a new set of possibilities for the piano-and himself. “When I was limited to only using the piano, all of a sudden I found myself getting much more creative,” DeSare said. “It taught me that you can make music out of just about anything.”

We travel (for pleasure, at least) to leave our world behind for a while. Still, bringing along the things we love most is often a … END_OF_DOCUMENT_TOKEN_TO_BE_REPLACED

Visit a pro audio retailer and almost every studio monitor speaker you see will have amplification built in. But visit a high-end audio store and … END_OF_DOCUMENT_TOKEN_TO_BE_REPLACED

Unless you’re a certified guitar nerd, the name Ted McCarty (1909-2001) probably means nothing to you. But no matter who you are, there’s little doubt … END_OF_DOCUMENT_TOKEN_TO_BE_REPLACED

In audio as in jazz, some of the most interesting trends happen far outside the mainstream. Hop onto internet forums dedicated to headphones, and you’ll … END_OF_DOCUMENT_TOKEN_TO_BE_REPLACED