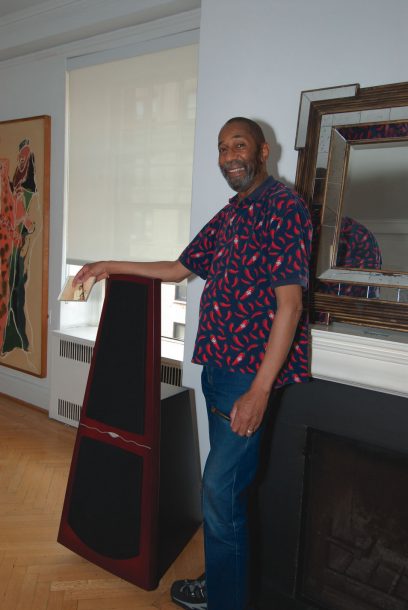 I have a friend, a true connoisseur of great jazz, who owns a pair of 35-year-old speakers which no amount of teasing, deriding or ridicule can convince him to chuck out the window. He recently had them reconditioned, and I’m sure they sound better now after surgery, but not even a quadruple bypass can bring his old, trusty Advents-great speakers in their day-up to the level of modern-speaker performance.

The operative phrase here is “in their day.” Loudspeaker technology has advanced by leaps and bounds in the last 30 years-hell, in the last 15-and the dated technology of those old Hall-of-Famers produces nothing but dated sound. Today’s speaker designers know far more about cabinet structure, resonance control, crossover circuitry-the electronic gizmos that send the woofers the lows and the tweeters the highs-not to mention that they have a far greater choice of high-quality raw speaker drivers than ever before. Even the wire used for all the internal connections has vastly improved since the early 1970s when the original Advents came out. Like I said, the Advents were great way back when, but so was my original Macintosh computer, but it would be ludicrous, no, impossible, to do what I do today on that old Mac. Like those old speakers, technology has passed it by.

How many other jazz fans are missing an enormous amount of musical detail and dynamics and just pure pleasure by continuing to pipe their music through aging, sonically ailing loudspeakers? My guess, and it’s only a guess, is that more than half of the dedicated jazz listeners in this country are using speakers purchased before 1990, and that’s a shame because music can be so much more with a great pair of speakers. We’ll replace our automobiles regardless of how well they run, but we usually only replace hi-fi gear when something breaks down or blows up.

If you are in that group of speaker-museum-curator-wannabes, now might be the time to check out some of the great new speakers on the market, some quite affordable, some with break-the-bank price tags. Over the years in Audio Files, we’ve enjoyed products from Triangle, Joseph Audio, DeVore Audio, PSB, Paradigm, Tetra, Totem, Almarro, Von Schweikert, Magnepan, Spendor, Vandersteen and Harbeth, to name just a few. All these folks produce speakers capable of making beautiful music.

This month, however, we’ll examine a couple of relative new speakers which will add to that already lengthy list, but maybe these few remarks can make your shopping easier. You are going shopping, aren’t you?

In September, we reviewed the brand new stereo receiver from Outlaw Audio (outlawaudio.com) and found it to be a worthy product, especially for its reasonable price. Outlaw has made its name engineering great gear at affordable prices-affordable partly through Outlaw’s direct-sale-only approach to marketing. (And the fact that, while they do all their design work in-house, they outsource their manufacturing-not necessarily overseas-and don’t have a pile of dough invested in factories and associated personnel.)

After years of success selling value-laden electronics and subwoofers, Outlaw has just released their first speaker-other than their acclaimed subs, that is-called the Outlaw Bookshelf Loudspeaker ($999 in black/$1099 in cherry). True to form, it is a winner.

Clearly well made, each speaker is hand assembled in the good old U.S. of A., and tweaked to Outlaw’s hardnosed reference standard. Each unit sounds identical to any other, a feat nearly impossible to achieve with typical mass-market gear. Internal components are all audiophile grade and the exterior finish, at least in the cherry model on loan for review, is furniture grade veneer and much nicer than it probably should be at this price. These babies allow for bi-amping or bi-wiring, include a unique room position compensation switch which changes the internal equalization curve depending on where you place them relative to wall boundaries, as well as a high-frequency adjustment switch which fine tunes the highs relative to room surfaces like hard or heavily carpeted floors.

For this audition, we utilized Outlaw’s RR2150 Stereo Receiver in addition to their LFM-2 Subwoofer ($299). The sub is another recent addition to the Outlaw lineup and adds that last dollop of bass to the system, down to about 25hz, a useful augmentation since the Bookshelf speakers cut off in the lower fifties. For some music, the sub will not be necessary, but it sure is nice to have that extra extension into the nearly sub-audible range, especially with very low acoustic bass, hard-plucked electric, well-recorded bass drums and, well, action-packed action flicks. Yep, this is a great little system for a non-surround home theater setup-I spent many hours enjoying films with this high-performance Outlaw gang. And when Outlaw unveils their new center-channel speaker, add an extra mono amp to the 2150-you really couldn’t ask for more in a modestly priced system geared equally toward music and film.

Inspired by the recent release of Charles Mingus Sextet’s Cornell 1964, I’ve been listening to a lot of Mingus’ catalogue on both CD and vinyl. Playing selections from the Cornell 1964 disc, I was impressed by the system’s ability to resolve details like concert-hall ambience, as well as presenting the fine nuances of instrumental textures. Though the master tape itself is probably not the best, Mingus’ solo treatment of “Sophisticated Lady” was offered by the Outlaws with gobs of delicious details, enough to feel you might have been in the hall that glorious night; Mingus rarely sounded more invigorating than with this stellar group featuring Eric Dolphy, Clifford Jordan, Johnny Coles, Jaki Byard and Dannie Richmond. Byard’s terrific piano solo on “Take the A Train” came across in all it’s boogie-woogie whimsy, with believable piano tone and balance delivered in spades. The nice thing about these speakers is they do nothing to overemphasize any portion of the frequency spectrum, so there is no fatiguing push at the top end, no drop-out at the bottom. Everything sounds balanced as it would in real life. If I had the jack, I’d round up this entire Outlaw pack for my own video system-the addition of excellent music playback in yet another room in the house would be a bonus. One important note: Since Outlaw only sells direct, they offer a 30-day home-trial period; if you don’t like the gear, you can return it, no questions asked.

For many years at various consumer-electronics shows, I’ve marveled at the wonderful speakers produced by Silverline Audio (silverlineaudio.com), and enjoyed the camaraderie of Silverline’s jovial designer Alan Yun. A couple of shows back, Yun was demonstrating a new product, the Silverline Prelude ($1200), which is a much smaller box than most of his always musical speakers-only about five inches wide and just over three feet tall. The perplexing thing about the performance of the speakers was the prodigious amount of bass and overall level of dynamics. Everyone in the room was convinced Yun had a hidden subwoofer and no one could figure out how such a diminutive package could produce such lifelike sound levels. Well, there was no sub, and the magic Yun achieved can be attributed only to good design.

Yun wanted to produce an affordable, compact speaker that would outperform its appearance. In this regard, he is an overachiever. This little devil can plumb bass depths as low as 35hz and output tremendous volume, even from a modest eight or so watts. If you are looking for a new speaker, and a price-point of 1200 clams falls within your budget, you must consider this speaker. It is that good.

Continuing with the Mingus theme, I listened to a handful of vintage LPs through the Preludes and was never less than fully engaged while the music was playing. For the money, the level of realism is startling. Dynamics of the instruments, from Mingus’ bass to Dolphy’s reeds and Dannie Richmond’s vortex-inducing drumming, all came across with lifelike presence. In addition, each instrument was so well defined it seemed to have a three-dimensional shape in the room; needless to say, there was lots of “air” around each player, and plenty of aural cues regarding the recording space. Some sections from Charles Mingus Presents: The Charles Mingus Quartet featuring Eric Dolphy (Candid) were downright scary, especially the ensemble passages featuring Dolphy and trumpeter Ted Curson.

Later, my jaw dropped during the first few seconds of “Moose the Mooche” from The Great Jazz Trio at the Village Vanguard featuring Hank Jones, Ron Carter and Tony Williams. Tony’s bass drum felt holographic and punchy … and deep. When I e-mailed Yun about this tremendous bass, especially when spinning great old vinyl, he revealed he had fine-tuned the design of the speakers using his vintage AR turntable and old-school tube electronics. As I write this, Williams is taking a short drum solo at the Vanguard, and the power of the reproduction has forced me stop and pay absolute attention, jaw again at floor level. OK, back to writing.

By the way, I listened to these speakers with the spot-on Nottingham Ace Space turntable (aslgroup.com), the sublime DIY Hi Fi LadyDay 300B tube amps (diyhifisupply.com), and the stunning Supratek Chenin preamp (supratek.biz). In any case, the sound of all these components performing synergistically was never short of astonishing. There was always perfect tonal balance from top to bottom, lots of detail, and a pleasing “roundness” to the sound of each instrument. And yeah, the exquisite vinyl and tubes sure helped add to that quality.

It bears repeating: Don’t overlook these Preludes. Yeah, you can do better, but you will spend much more dough. One sure sign of their quality is that I never wanted to stop listening, I never tired of the sound I was hearing, and the more I heard, the better they performed.

Visit a pro audio retailer and almost every studio monitor speaker you see will have amplification built in. But visit a high-end audio store and … END_OF_DOCUMENT_TOKEN_TO_BE_REPLACED

Unless you’re a certified guitar nerd, the name Ted McCarty (1909-2001) probably means nothing to you. But no matter who you are, there’s little doubt … END_OF_DOCUMENT_TOKEN_TO_BE_REPLACED

In audio as in jazz, some of the most interesting trends happen far outside the mainstream. Hop onto internet forums dedicated to headphones, and you’ll … END_OF_DOCUMENT_TOKEN_TO_BE_REPLACED

On April 18, 1972, the Roland Corporation was founded in Osaka, Japan. Its mission: to produce electronic instruments and accessories for musicians. Two years later, … END_OF_DOCUMENT_TOKEN_TO_BE_REPLACED