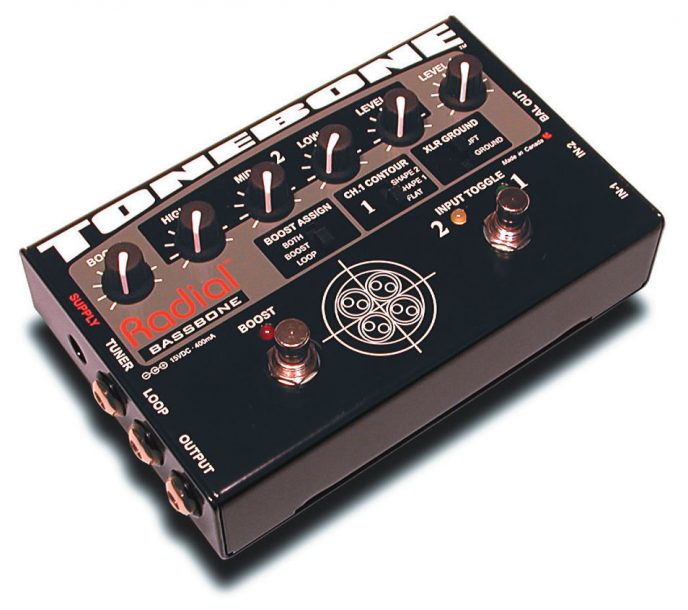 Suppose you’re a bassist on a gig that calls for the use of two instruments but you just have one single-channel amp. That situation isn’t uncommon, but the problem it creates is. Let’s say the two instruments in question are a Fender P bass-style electric and a fretless, something akin to the B.Bo bass also reviewed in this issue. Each bass requires its own unique EQ and gain tweaking to sound its best, but since the two share an amplifier, the amp’s tone settings have to be readjusted every time you switch instruments. Plenty of items exist to quell this dilemma, but perhaps none do so with the ease and sonic fidelity of Radial Engineering’s Bassbone ($299 list), a signal-management/preamp pedal used by no less than John Patitucci.

Radial couldn’t have made the Bassbone pedal simpler to use. Straight out the box, and with me paying no regard to the instruction manual, it took nothing more than plugging in and turning its knobs to understand the key functions and put them to use. Two phono inputs allow entry for a pair of bass signals, which are output via either a phono or XLR jack (a balanced, direct output used for patching in directly to a mixing console or PA system). A toggle footswitch selects which bass signal is sent to the output.

Each channel has a knob for gain, but only channel two has a full-on EQ. This surprised me as I figured the Bassbone would allow for the total tone-shaping of each channel. Instead, the bass plugged into channel one will need EQ setting at the amp, though there are two onboard preset EQ curves for channel one (both curves cut a midrange frequency and slightly boost low- and high-end). Thus when you shape the sound of channel two’s signal, you must still account for the amp’s settings.

Fittingly, the EQ section for channel two has three bands that have a powerful, wide gain sweep: The low setting can add or subtract 12 dB of gain at 75 Hz; the midrange goes plus or minus 10 dB at 470 Hz; and the high end can be tweaked at 5.6 kHz for 16 dB in either direction. This should always be enough to achieve a desired tone. I found it easier to get it right when I used the bass’ own tone and volume controls in combination with the Bassbone’s EQ.

Mindful that many bassists need to kick it up a notch to be heard during a solo, Radial added to the Bassbone a boost function that clicks on or off via the footpedal’s other toggle. A volume knob specifically for the boost function lets you add up to 8 dB of gain to the output signal. At its left-most position, that knob cuts the Bassbone’s total output, thus allowing the boost feature to double as a mute function, which could come in handy during tuning. On that subject, the Bassbone has a separate phono jack for a tuner, whose signal bypasses the user’s EQ settings but has been filtered through a band-pass EQ Radial created specifically for tuners.

Also, a three-position slider switch on the control surface allows the boost function to be coupled with the Bassbone’s effects loop, meaning you can add another tonal color at the same time that you amp your signal. And, by way of a three-way slider switch, you can have the boost footswitch not affect volume at all, and simply engage the loop.

It would be nice if the effects loop and boost had their own separate footswitches, if for nothing but a little more added control. Of course that would make it tougher to turn on the two functions at the same time. My only other gripe is the wall-wart power supply. It’s understandable that the pedal’s power supply needs to be located away from the box in order to reduce noise and heat, but if Radial could begin using the type of power cables that feature the transformer housing somewhere in the middle of the cord’s length, thus allowing for a regular-sized plug, it’d be a great, space-saving improvement.

Obviously, the Bassbone’s tones are dependent on the basses, amp and cables it’s combined with. What doesn’t vary is the pedal’s signal path, which remains as clean as its smart, friendly design. Seemingly the only tone-altering effects the Bassbone generates are those that the user dials in with its switches and knobs; the signal doesn’t become muddied traveling the Bassbone’s circuits and there is no loss of low-end frequencies. There’s no wonder why a professional player the caliber of Patitucci keeps a Bassbone in his rig.

Visit a pro audio retailer and almost every studio monitor speaker you see will have amplification built in. But visit a high-end audio store and … END_OF_DOCUMENT_TOKEN_TO_BE_REPLACED

Unless you’re a certified guitar nerd, the name Ted McCarty (1909-2001) probably means nothing to you. But no matter who you are, there’s little doubt … END_OF_DOCUMENT_TOKEN_TO_BE_REPLACED

In audio as in jazz, some of the most interesting trends happen far outside the mainstream. Hop onto internet forums dedicated to headphones, and you’ll … END_OF_DOCUMENT_TOKEN_TO_BE_REPLACED

On April 18, 1972, the Roland Corporation was founded in Osaka, Japan. Its mission: to produce electronic instruments and accessories for musicians. Two years later, … END_OF_DOCUMENT_TOKEN_TO_BE_REPLACED