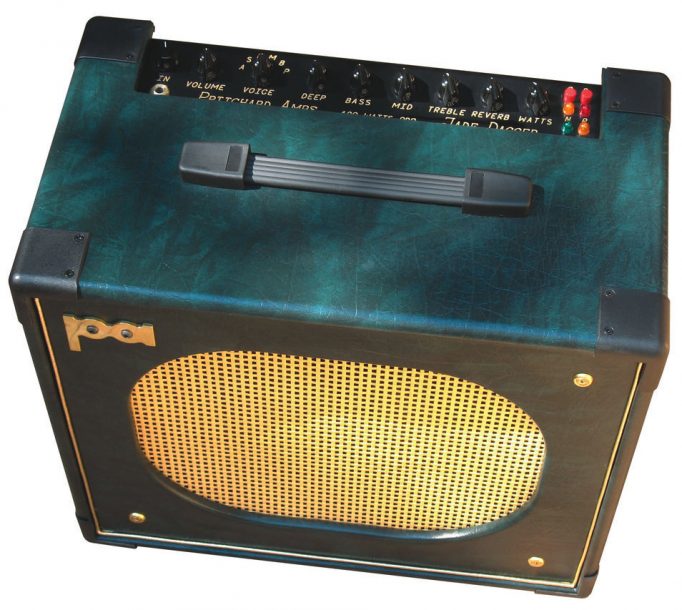 A single multifaceted guitar amp is, like a great sampled grand piano sound, one of those elusive ideals in the world of music equipment. While the Jade Dagger, the latest product out of Eric Pritchard’s magical custom-amp laboratory, won’t serve all musical needs, it packs so much energy, tonal flexibility and-perhaps most important-clarity into a compact, easily transportable package that it seems like a minor miracle.

Especially as a beefy and bell-like traditional jazz-guitar amp, a bolder replacement for the old Polytone model, the Jade Dagger achieves that noblest of goals: making players feel as though they’re better than they are, or thought they were. And with a dizzying (sometimes literally) array of variations on tone, texture and crunch built into its inventive design, the latest Pritchard creation ventures into chameleonic terrain where few amps have successfully navigated.

Did I mention that it’s solid-state? Where does all that tone and heft hide?

Something mystical hovers over the Pritchard line of amps, an attitude reflected in the company’s grand product names. In effect, the Jade Dagger is a sleeker one-channel version of the earlier two-channel combo amp called the Sword of Satori. Consider the Jade Dagger another Zen-warrior moniker, from a designer who has forged his own path to amplifier enlightenment. Inside a cabinet equipped with two nine-inch speakers and one five-inch, Pritchard has righted what he perceives as wrongs in conventional wisdom and patiently researched and developed some new ideas.

For this review a variety of guitars were used: a ’64 Gibson ES-335, a mongrel Telecaster, a Roland guitar controller (minus the synth), an Alvarez steel-string guitar and a Takamine classical guitar with active pickup. I attempted to vary the stylistic terrain of material put through the amp, and with the requisite tweaking of knobs, the amp rose to every varied occasion. A startling clean yet not brittle sound gave articulate credence to gnarled jazz-chord voicings and wannabe Wes-ish runs. Fat ‘n’ crunchy humbuckered blues licks and C&W-ish twanging Tele riffs sounded inspiring, as did steel-string acoustic jangle and nicely warmed bossa and Bach smatterings on nylon-string acoustic.

Overall it’s a stellar jazz amp and also a dream for pedal-steel players seeking punch, clarity and tone. But beyond such specific purposes, the amp’s grander charm lies in the fine details and malleable sonic subtleties available to the intrepid player. To this end, Pritchard has brought his warrior-rethinker approach to the business of knob functions. In part, the work has been preconfigured through use of the “Voice Knob,” a personalized twist on the “amp modeling/amp farm” idea.

The Jade Dagger comes with six settings, each identified by a single cryptic letter, which makes committing the positions to memory a challenge-and also a cause for proprietary pride. The settings include A, for “Airy Art” (ideal for acoustic instruments), and the emulation of various American and British amps in the F (“Famous Flat”) and M (“Moderately Bright”) settings. Electric jazz players will likely gravitate toward S (“Smooth Solo,” with an edgy swipe of mids and high end), or the traditional warmth and gleam of the B setting (“Bass Boost”). Fender-philes will take to the P (“Precision/Tele”).

Quick-change, foot-pedal-triggered alterations are available through the “Crunch” and “Boost” buttons, which rough up the tone and notch up the volume by degrees. Another distinctive new idea, the “Watts” knob, is Pritchard’s answer to the age-old problem of adjusting the overdrive relationship of the master and volume knobs: The Jade Dagger allows you to make scalable adjustments of volume via wattage (up to 180 watts), according to the room or the context, but without changing the distorted tone. According to Pritchard literature, the Watts knob “maintains the output stage interrelationships so that the tone of the output stage remains constant as the power is varied.”

Good, useful ideas continue on the back of the amp, too: XLR input and output allow for microphones and for an equalized direct-out to a mixing board; effects send and return loop minimizes tone loss, and a DI output will make soundmen grin. In addition to the standard impedance speaker jack, there is a second option for “Speaker PJ” (practice jack), intended for lower practice-level volume without sacrifice of desired tone.

With this amp, the idea of dialing in and then preserving the precisely desired tone at different volumes and under different circumstances is a recurring theme-a mantra, if you will.

Retailing at around $2,000 depending on cabinet configuration, Pritchard amps don’t come cheap-. Few things of real value do.

Visit a pro audio retailer and almost every studio monitor speaker you see will have amplification built in. But visit a high-end audio store and … END_OF_DOCUMENT_TOKEN_TO_BE_REPLACED

Unless you’re a certified guitar nerd, the name Ted McCarty (1909-2001) probably means nothing to you. But no matter who you are, there’s little doubt … END_OF_DOCUMENT_TOKEN_TO_BE_REPLACED

In audio as in jazz, some of the most interesting trends happen far outside the mainstream. Hop onto internet forums dedicated to headphones, and you’ll … END_OF_DOCUMENT_TOKEN_TO_BE_REPLACED

On April 18, 1972, the Roland Corporation was founded in Osaka, Japan. Its mission: to produce electronic instruments and accessories for musicians. Two years later, … END_OF_DOCUMENT_TOKEN_TO_BE_REPLACED