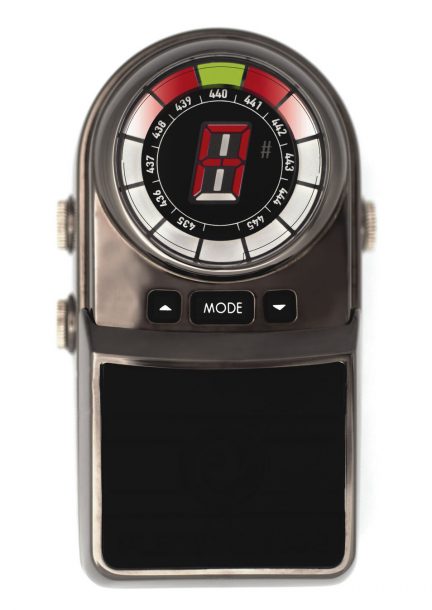 In recent years, Planet Waves has expanded its arsenal of tools for the performing guitarist with some truly innovative products. Earlier this year, the company unveiled a new line of tuners that includes, among other innovations, a strobe tuner the size of a guitar pick and a string winder/cutter/tuner combo. The line’s flagship product, however, is the PW-CT-04 Chromatic Pedal Tuner, which features both standard sweep and strobe tuning modes-a tuner that I won’t be replacing anytime soon, unless perhaps they improve on this one. And Planet Waves might improve the Chromatic Pedal by finding a way to lighten its load. It weighs in at about a pound and a half and is one of the heaviest stompboxes I’ve ever encountered. But the payoff for the weight is its obvious durability and demonstrated performance ability.

Having faith in the heavy little box, I gave the tuner its first shot on a gig, keeping it in sweep mode. To save the audience the pain of listening to me tune, I used the tuner’s non-bypass output. Of the tuner’s two outputs, it’s the one that sends the signal to an amp only when the tuning function is off, allowing you to tune on the sly. The second output is a true hard bypass that sends the signal out at all times. The actual tuning function is simple and familiar to any guitarist. The note you are tuning to lights up in a large digital display and a bank of LEDs “sweeps” from left to right, displaying sharpness or flatness. Planet Waves claims this tuner is accurate within three cents of the designated pitch, and I believe it. But aside from the tuner’s wonderful accuracy, I most appreciated its readability. The lights are big and bright-just what you need when tuning onstage. Throughout the gig I noticed a short lag whenever I switched the tuner on. It’s just a second of waiting, but it’s something to consider if you’re absolutely impatient.

Additionally, this was a gig where my trusty power strip forgot to show up, and I was left with just two outlets at my disposal. I needed to plug in my amp and compressor, leaving the tuner to operate on battery power. The tuner remained bright and accurate throughout the two-hour-plus gig on the battery, so I wouldn’t worry about battery-life for a single gig. What I did find frustrating was getting inside the battery compartment. Planet Waves’ battery lid latch has a beautiful design that’s far more graceful than those on most guitar pedals, but the slot that allows access to the spring that pops the hatch open is a hair too small. If the gods at Planet Waves are listening, y’all could widen the slot to accommodate the tip of a standard guitar pick. It’d please a lot of guitarists and keep us from fishing for something like a flathead screwdriver or a house key to change batteries in your otherwise splendid tuner. Those who do have a spare outlet can power the Pedal Chromatic Tuner with a standard 9V guitar effects power supply. What’s more, the pedal has a power output suitable for daisy chaining power to more stompboxes. This tuner is loaded with useful features.

At home I spent time with the tuner’s strobe mode, which cycles LED lights clockwise or counterclockwise around your target note, depending on whether you’re sharp or flat. When you’re in tune, the lights stop rotating and a green LED lights up. Since both modes are equally accurate, choosing your mode is simply a matter of personal preference. The Chromatic Pedal Tuner also allows for tuning calibration from A435Hz to A445Hz, and selecting your desired frequency is easy.

Tuners should also operate silently. Nothing is more frustrating than having a pedal in your effects chain that adds another layer of hum and hiss to the signal. Aptly, Planet Waves gave this tuner true bypass circuitry, and the result is an unnoticeable addition to my signal chain-it didn’t add noise and it didn’t suck away my tone, either.

As a guitarist who hits the stage with a revolving cast of, let’s say, idiosyncratic axes that each seems to have its own sense of pitch, I’ve employed as many pedal tuners onstage as I’ve rejected. It’s tougher than you might think to find a tuner that’s not only deadly accurate but that doesn’t add noise to the signal or suffer from switching problems. And while the Chromatic Pedal Tuner has enough features to make you skeptical about how well a single box can handle so much, this is a tuner that a pro can trust.

Visit a pro audio retailer and almost every studio monitor speaker you see will have amplification built in. But visit a high-end audio store and … END_OF_DOCUMENT_TOKEN_TO_BE_REPLACED

Unless you’re a certified guitar nerd, the name Ted McCarty (1909-2001) probably means nothing to you. But no matter who you are, there’s little doubt … END_OF_DOCUMENT_TOKEN_TO_BE_REPLACED

In audio as in jazz, some of the most interesting trends happen far outside the mainstream. Hop onto internet forums dedicated to headphones, and you’ll … END_OF_DOCUMENT_TOKEN_TO_BE_REPLACED

On April 18, 1972, the Roland Corporation was founded in Osaka, Japan. Its mission: to produce electronic instruments and accessories for musicians. Two years later, … END_OF_DOCUMENT_TOKEN_TO_BE_REPLACED