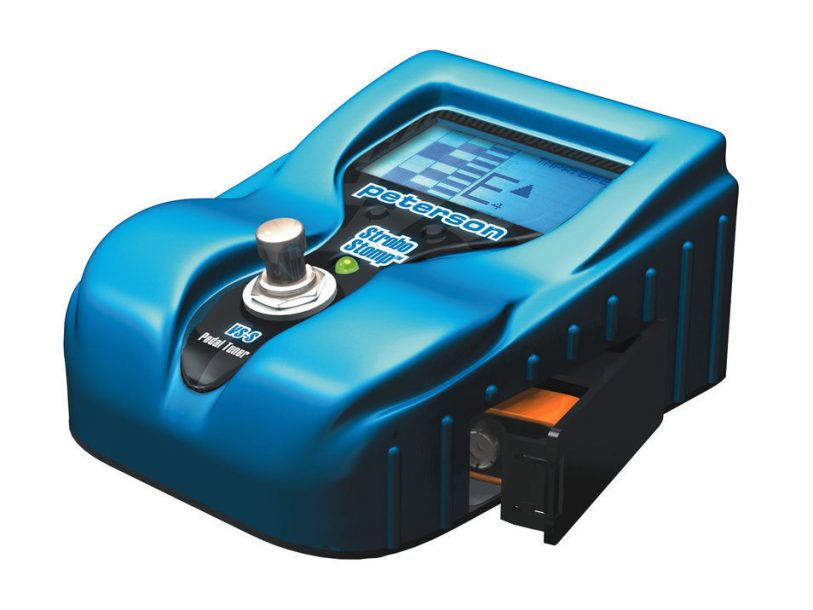 A users’ forum at the Peterson Web site displays a picture of a giant truck rolling over the British company’s StroboStomp tuner, an attempt to show the durability of the unit’s casing. Cleverly modeled after an Aston Martin sports car, and die-cast from sturdy aluminum frame, the StroboStomp is just a bit larger than a Boss pedal. After a few weeks of testing, I can confirm that this tuner is the sturdy ally that the Web site images suggest-that is if musicians will invest the time required to learn how to use it properly.

Those who have never used a strobe tuner will have to readjust to Peterson’s method, where a four-column set of bars scroll up and down the bright LED display to indicate the sharpness (up) or flatness (down) of notes being scrutinized. It takes patience to become comfortable with the method, but in the end it’s a more precise method of tuning. Encompassing a range that goes well beyond that of the guitars and basses it’s designed for, the StroboStomp is stated to be accurate within 1/10th of a cent in pitch. I tuned various guitars and a couple basses, and this is one deadly accurate tuner-as it should be, considering its $309 list price.

But the StroboStomp is also laden with features that include a set of preset tuning temperaments made specifically for guitar, bass, 12-string guitar or guitars outfitted with the Buzz Feiten Tuning System. Also included are two spaces for saving a temperament of your own creation. Doing so is easy, but it’s the kind of process that you’d need to reacquaint yourself with via the manual if you let enough time lapse between programming one temperament and another. Luckily the manual is written in clear and simple language.

Further justifying the tuner’s cost is its double-life as an active direct-box for sending acoustic guitar and bass signals straight to a mixing board. For this purpose, the unit’s backside has an XLR output in addition to its 1/4-inch phono input and output. Access to a switch that activates the DI function comes by way of the nine-volt battery compartment on the tuner’s right side. When used as a DI box, the StroboStomp still tracks notes for tuning, but the tuning circuit is no longer a true bypass circuit, which it otherwise always is.

Considering the StroboStomp’s reliable accuracy and added features, which also include the possibility of powering more pedals from a nine-volt power output (which is only usable if the tuner is powered from a wall-plug AC adapter), this is probably the last stage tuner you’d ever buy.

Visit a pro audio retailer and almost every studio monitor speaker you see will have amplification built in. But visit a high-end audio store and … END_OF_DOCUMENT_TOKEN_TO_BE_REPLACED

Unless you’re a certified guitar nerd, the name Ted McCarty (1909-2001) probably means nothing to you. But no matter who you are, there’s little doubt … END_OF_DOCUMENT_TOKEN_TO_BE_REPLACED

In audio as in jazz, some of the most interesting trends happen far outside the mainstream. Hop onto internet forums dedicated to headphones, and you’ll … END_OF_DOCUMENT_TOKEN_TO_BE_REPLACED

On April 18, 1972, the Roland Corporation was founded in Osaka, Japan. Its mission: to produce electronic instruments and accessories for musicians. Two years later, … END_OF_DOCUMENT_TOKEN_TO_BE_REPLACED