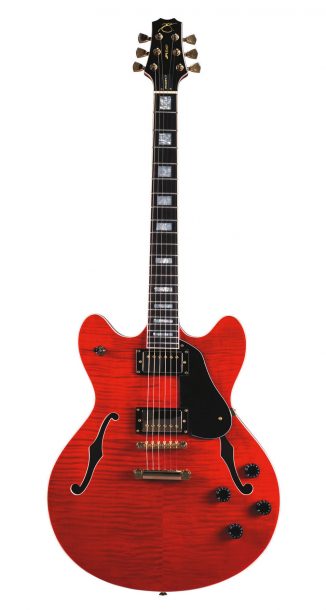 For developing guitarists with an interest in jazz, inexpensive yet playable hollowbodies and semihollows were once as elusive as the intricacies of “Rhythm” changes. Not so today, as a number of manufacturers have managed to produce good-sounding, good-looking, well-built instruments for the 15-year-old high school ax-man on a budget. Peavey’s JF-1 EXP is a prime example of this welcome trend in instrument design, but the guitar’s charms aren’t exclusive to the underage crowd: players of all ages (and disciplines) can get down with the JF-1 EXP and its guilt-free price tag.

Taking its obvious inspiration from Gibson’s ES-335, the archetype for slim-line hollowbody guitars, the JF-1 EXP and its two humbuckers boast both the power of a solid-body instrument and the warmth of a hollowbody. In other words, the JF-1’s more-than-modest $399 list price gets you a whole heap of sounds.

In the neck position with the tone rolled down, the JF-1 is a straightahead box. Bebop lines sound punchy and precise; chordal workouts emit a solid, balanced hue. Moan the blues in the middle position, where the JF-1’s timeless blues body-shape contributes to some tasty B.B. King-inspired tones. The JF-1 proves it is capable of performing all sorts of Americana, as a flick to the bridge position allows you to get in some convincing Telecaster twang and itchy N’awlins funk riffage.

Where the JF-1 performs surprisingly well, however, is in the distortion department. Inexpensive hollowbodies tend to feed back an ungodly amount once the Fuzz Face gets stomped, but the JF-1 and its maple centerpiece rock out with a minimal amount of unwanted noise, and its slim-tapered neck invites gratuitous hard-rock soloing. A set neck design gives the guitar almost Spinal Tap-worthy sustain, and a full 22-fret, two octave range is easily accessible courtesy of a double-cutaway design.

The instrument’s laminated sunburst finish and pearl inlays are attractively misleading and will fool all except the most scrutinizing guitar-shop clerks into thinking the JF-1 is a much pricier piece. Gold die-cast tuning heads no doubt add to this effect but also grant the guitar a gift for staying in-tune. From car trunk to living room to rehearsal space during my schizophrenic fall season, the JF-1 required a minimal amount of retuning and intonation adjustment, typically a tedious stipulation of guitars in the JF-1’s price class.

For an affordable look into jazz-worthy instruments that can wail too, check out Peavey’s JF-1 EXP. Your hands, ears, eyes and checking account will thank you.

Visit a pro audio retailer and almost every studio monitor speaker you see will have amplification built in. But visit a high-end audio store and … END_OF_DOCUMENT_TOKEN_TO_BE_REPLACED

Unless you’re a certified guitar nerd, the name Ted McCarty (1909-2001) probably means nothing to you. But no matter who you are, there’s little doubt … END_OF_DOCUMENT_TOKEN_TO_BE_REPLACED

In audio as in jazz, some of the most interesting trends happen far outside the mainstream. Hop onto internet forums dedicated to headphones, and you’ll … END_OF_DOCUMENT_TOKEN_TO_BE_REPLACED

On April 18, 1972, the Roland Corporation was founded in Osaka, Japan. Its mission: to produce electronic instruments and accessories for musicians. Two years later, … END_OF_DOCUMENT_TOKEN_TO_BE_REPLACED