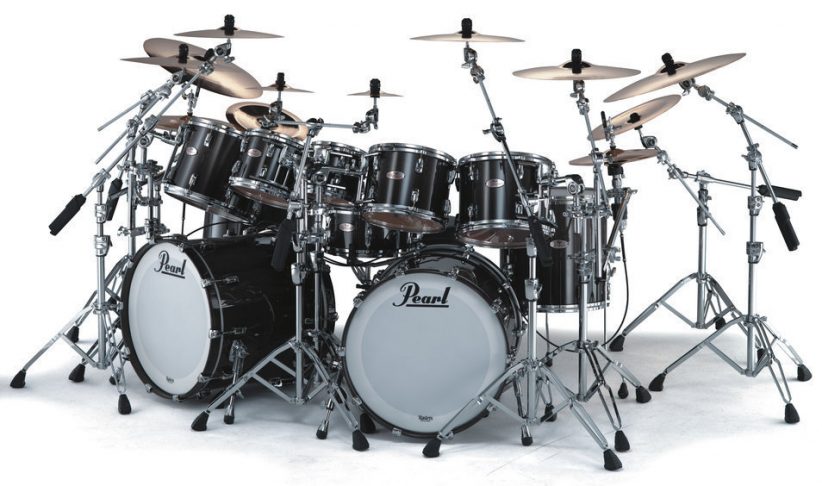 Six years ago Pearl launched its Masterworks Series, which rethought drum acoustics. The Masterworks concept allowed drummers to custom-choose the wood and thickness for each drum’s shell. Putting further research into the sonic properties of drum shells has led Pearl to its new Reference Series, which expands on the Masterworks concept to incorporate two different bearing edges and three different wood types that can be combined within a single shell to create sounds specific for each drum’s range. For example-comparing two intermediate tom sizes-the 14-inch x 11-inch tom is built with two inner plies of mahogany and four outer plies of maple; the 16-inch x 13-inch tom has four inner plies of mahogany and two outer plies of maple, both with rounded 45-degree bearing edges. Building sets from drums of like woods and with uniform shell plies and bearing edges has officially been deemed an obsolete compromise.

But the truth is in the pounding. I used the review set with both a septet and two quintets over the course of five gigs in environments ranging from a jazz club to auditoriums to concert halls. Once I found “my” bass drum sound (tuning the toms was easy), they were inspiring to hear and big fun to play. Each individual drum sang authoritatively with its own voice, yet together they blended as a harmonious choir.

In the 1980s, as synthesizers and drum machines threatened to take over popular music, electric guitar manufacturers tried to come up with instruments that were … END_OF_DOCUMENT_TOKEN_TO_BE_REPLACED

Vinyl enthusiasts love to brag that last year, the dollar volume of record sales surpassed that of CDs for the first time since the 1980s. … END_OF_DOCUMENT_TOKEN_TO_BE_REPLACED

These days, if you’ve got the right apps, you can recreate the sound of just about any instrument on earth. In the early 1970s, when … END_OF_DOCUMENT_TOKEN_TO_BE_REPLACED

It was the peak of the Roaring Twenties, and a great time to sell saxophones. More than a million of the instruments were already in … END_OF_DOCUMENT_TOKEN_TO_BE_REPLACED