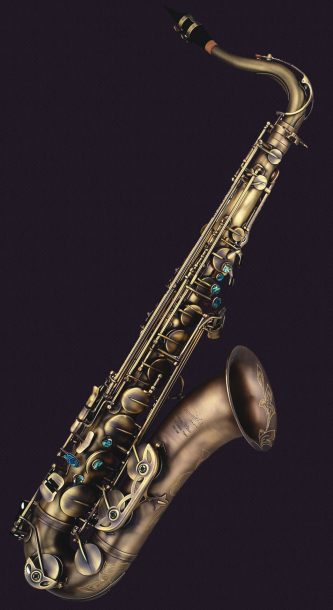 Since debuting on the American market, Taiwanese saxophones have gone from being a band- room joke to a serious alternative to the higher priced horns coming from Selmer, Yamaha and Keilwerth. Their improvements have been so noticeable as of late that we are seeing major companies such as Selmer producing saxophones in Taiwan (e.g., the La Voix). So when I tried the new System-76 and rolled-tone-hole saxophones from P. Mauriat I was expecting to play two nice horns. What I didn’t expect was to play two saxophones that could easily redefine the way we as saxophonists view horns from Taiwan.

Like most companies, P. Mauriat boasts of having the “vintage” sound for which people search. Unlike most other companies, I believe they might have just found it. So what does that mean for us skeptics who still cling to our old relics, enduring the antiquated key action and the green tinge of unlacqured brass? It means we no longer have to compromise sound quality of the vintage horns for the ergonomic feel of a modern instrument.

From the very first note any player will notice that these two models are serious saxophones. They are fun to play and after playing them you will find yourself windswept as if you have been taken for a ride on a vintage motorcycle.

Both saxophones produce a large, full, centered sound with amazing scale and pitch. The System-76 is a larger bore horn that is slightly freer blowing, producing a brighter sound. The System-76 comes with a Super Jazz VI neck that aids in this production. This neck is also available for the rolled-tone-hole model for an extra charge. The rolled-tone-hole models were my favorite saxophones, producing a larger, darker and more centered sound. Altissimo was absolutely effortless. The PMXA-67R alto was so even and effortless in the altissimo register I felt like I had an extra octave key.

The PMXT-66R rolled-tone-hole tenor tops the list however. It is a monster saxophone that plays so effortlessly that you might be fooled into thinking you are a better player than you really are. My test model was a special order that did not have a high F-sharp key. To be honest this horn is so close a reference to my 1957 Selmer Mark VI that when I picked it up it felt like the horn I have been playing for 15 years. Because the key action and the ergonomics are comfortable, there is something oddly familiar about this tenor.

Both horns have full body bracing and strong, solid posts. The key work is very meticulous and exact. In fact, the pieces fit so precisely that my repairman and I thought these horns used spring-loaded rods. It took us a while to realize that the fit was so accurate that it was air pressure from within the rod itself which gave the illusion of a spring. The key guards are solid and offer outstanding protection. I accidentally banged the tenor against a wood railing in my home. Not a dent was to be found anywhere on the saxophone. The same could not be said for the railing.

The System-76 has some added double bracing on the low B and C keys as well as an added body brace that protrudes from the saxophone allowing it to be set safely on a table. The placement of the palm keys and articulated side keys fit the hand very nicely. I would have liked to see more of a tilt on the low B-flat key. Additionally I wish the low E-flat and C keys on the System-76 had been more in line with the body. Too often it felt like my pinky was wandering off.

The System-76 offers traditional drawn tone holes while the PMXT-67R and PMXA-66R feature true rolled tone holes that are drawn and rolled from the body and not caped like some horns on the market. Additionally, the bell is slightly larger and more flared on the rolled models.

So was there anything that I didn’t like about these horns? Yes, the cases. Don’t let the French flag on the side fool you: They are not the same quality of case as BAM cases (the other case with the French flag). To be honest, I cannot figure out why a company that makes such an amazing saxophone would risk putting them in flimsy cases. There was way too much movement and play with the alto cases and the padding does not respond well to shock. You can push on the padding and the dent remains. So, my advice is to budget in a couple hundred extra and have the horn shipped in another aftermarket case.

This brings me to one other minor point. There were a couple of things that made me wonder if P. Mauriat focused so much on the major points that it’s forgetting the minor ones. For example, the PMXT-67R tenor came with a plastic thumb hook, but the PMXA-66R alto had a metal one. The System-76 horns have a cork behind the thumb lever on the octave key to support movement. But the rolledtone-hole models do not have a cork. It is some of the most obvious things that are often overlooked. But I am sure that the next versions will have these areas improved as well.

I know there are players out there who will never try horns like these. They simply won’t believe that it is possible to recreate the past. Rest assured P. Mauriat didn’t recreate the past. The company has taken the best of yesteryear, modified it and taken it to whole new level of playing enjoyment. If you are smart you will try these saxophones out-and you will be glad you did.

Visit a pro audio retailer and almost every studio monitor speaker you see will have amplification built in. But visit a high-end audio store and … END_OF_DOCUMENT_TOKEN_TO_BE_REPLACED

Unless you’re a certified guitar nerd, the name Ted McCarty (1909-2001) probably means nothing to you. But no matter who you are, there’s little doubt … END_OF_DOCUMENT_TOKEN_TO_BE_REPLACED

In audio as in jazz, some of the most interesting trends happen far outside the mainstream. Hop onto internet forums dedicated to headphones, and you’ll … END_OF_DOCUMENT_TOKEN_TO_BE_REPLACED

On April 18, 1972, the Roland Corporation was founded in Osaka, Japan. Its mission: to produce electronic instruments and accessories for musicians. Two years later, … END_OF_DOCUMENT_TOKEN_TO_BE_REPLACED