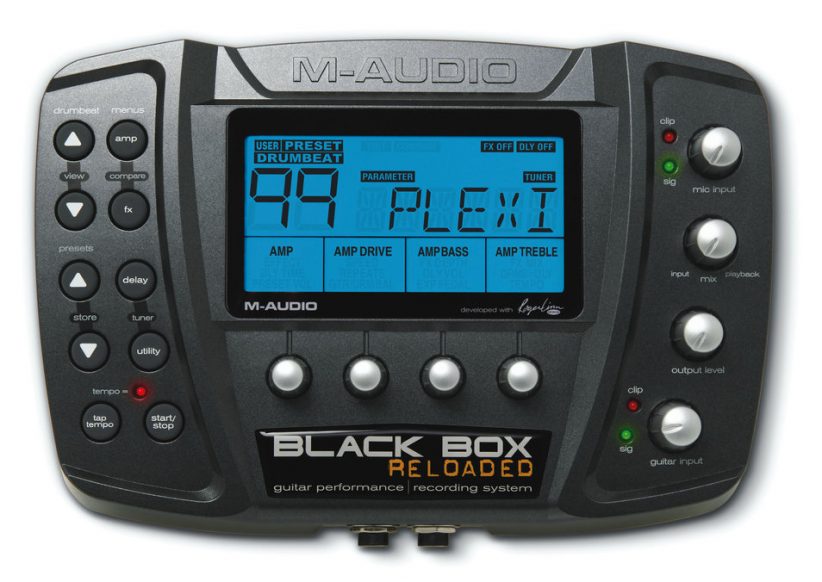 Unless you’re a guitar-slinging hermit living out in the sticks where not a soul can be pestered by the sound of your endless practice sessions, there are bound to be times when you need to noodle as quietly as possible. Neighbors, spouses, roommates, even pets seem to become all the more irritated each time they endure the sound of a repeating scale exercise. So, not wanting to lose the folks I’ve managed to trick into friendship, I’ve long searched out machines that allow me to plug in, strap on the cans and practice without anyone knowing it. And with every passing year it seems that the technology in these boxes gets a little better, more realistically creating in my headphones the illusion that I’m playing through a bona fide tube amp, the way God intended. At the moment I’m taken with M-Audio’s Black Box, specifically its second incarnation, version 2.0, which supplies a tour van’s worth of amps via digital modeling and provides a helluva lot more than just a means to silently practice.

Developed in league with Roger Linn-a tireless musical tinkerer and a legend in hi-fi audio design, look him up-the Black Box comes touted as a Guitar Performance Recording System, encompassing amp models, onboard effects and drum patterns, and a means to record your music. It’s sturdy yet svelte, has roughly the same size footprint as a six-pack of beer and besides headphones and guitar inputs, offers connections for a microphone and three pedals, and enables output to computer via USB, plus additional balanced stereo phono and S/PDIF outputs. If you’re total recording needs boil down to your guitar, a voice and preprogrammed rhythm, it’s possible the Black Box is all the interface you need, providing you can live with modeled amp sounds.

Turns out I can live with modeled amp sounds, though perhaps not in live performance (one reason why I wouldn’t be keen on employing M-Audio’s accompanying, yet sold separately, performance pedal for the Black Box). For practicing and demo recording purposes, the amps modeled by the Black Box are wonderful approximations of the real thing. It’s creatively invigorating to switch between simulations of a Fender Deluxe Reverb, a Gallien-Krueger 800RB, and a Bogner Ecstasy, hear the difference between the “amps” and let varying sounds take me in new directions. And the Black Box gives you a decent amount of control over the settings on any of the 40 included amp models, enough to make the tonal possibilities on any one amp seem endless.

According to the Black Box manual, Roger Linn’s favorite feature is the beat-synched effects processor. Now, I tend to like my music to feel a bit looser, but if you are after effects that match up to the beat, then you might agree with Roger that this is the great secret weapon onboard the Black Box. For me it’s simply the ability to start one of the 100 drum patterns contained in its memory, select an amp and maybe one of its 121 effects and get down to practicing and/or generating new ideas. The drums feel better to play with than a metronome and, static as the patterns may be, the accompanying rhythm can lead to cool, new music.

Or maybe the best thing about the Black Box is that it doesn’t take much experience with computer recording systems to get it up and running. You really can just install the included recording software, plug the USB cable into your computer and play and record yourself into the wee hours. If you’re already set in your ways, the box claims compatibility with most popular recording software. Learning the ropes of the Black Box itself takes a little time and patience, but that’s usually the case with equipment like this. For the money, $329 list, the Black Box stacks up to any other amp modeler at its price and adds the value of a complete recording solution.

Visit a pro audio retailer and almost every studio monitor speaker you see will have amplification built in. But visit a high-end audio store and … END_OF_DOCUMENT_TOKEN_TO_BE_REPLACED

Unless you’re a certified guitar nerd, the name Ted McCarty (1909-2001) probably means nothing to you. But no matter who you are, there’s little doubt … END_OF_DOCUMENT_TOKEN_TO_BE_REPLACED

In audio as in jazz, some of the most interesting trends happen far outside the mainstream. Hop onto internet forums dedicated to headphones, and you’ll … END_OF_DOCUMENT_TOKEN_TO_BE_REPLACED

On April 18, 1972, the Roland Corporation was founded in Osaka, Japan. Its mission: to produce electronic instruments and accessories for musicians. Two years later, … END_OF_DOCUMENT_TOKEN_TO_BE_REPLACED