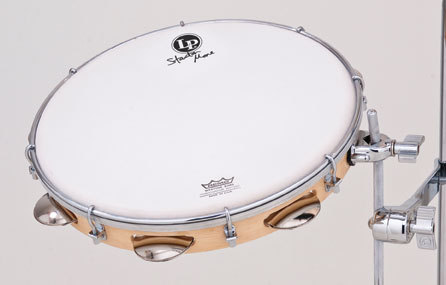 Inspired by world-music innovators like Trilok Gurtu and Zakir Hussain’s Masters of Percussion, many drummers are experimenting with expanding-or even exploding-conventional ideas of the drumset. For instance, the extremely knowledgeable Philadelphia percussionist Jim Hamilton recently showed me a kit he’s working on consisting only of various-sized frame drums, with the largest, tuned low and positioned to his left, functioning as the bass drum, leaving his feet free for using tricked-out pedals to play cowbell or maraca.

For those of us hesitant to plunge headfirst into such radical departures from the norm, Latin Percussion has introduced an instrument that will at least allow you to dip a big toe into the deep waters of re-imagining what a typical set could be. Played and endorsed by New Orleans groover Stanton Moore, the LP Rio pandeiro can be integrated seamlessly into any set-up.

A tunable tambourine of the highest quality, the Rio is a 2-inch-deep, 1/4-inch-thick, 12-inch-diameter maple shell, finished beautifully inside and out with clear lacquer. The eight tuning rods accept a regular 12-inch drumhead (LP outfits it with a coated Remo Emperor), and tuning is accomplished with a hollow hexagonal tube. Luckily there is a key-ring attachment, because at less than 1.5 inches long and weighing virtually nothing, this tuning key could easily become vacuum-cleaner food. There are seven sets of two-inch zils-the “jingles”-arranged in a single row, with the space for an eighth set taken up by an LP holder that conveniently attaches to any 3/8-inch to 1/2-inch mounting rod. Of course, at 12 inches, it can also be held by most snare stands. (“Handcrafted in Thailand” and retailing online at around $96, the pandeiro ships with an LP carrying bag.)

Instead of schlepping around another tripod base however, I opted for mounting it off my hi-hat stand using an adjustable ball-style L-rod tom clamp, occupying the area right where an auxiliary snare might be positioned. This worked for facilitating rudiment-based patterns, producing a tom-like timbre combined with the familiar “ching” underneath. But there are other intriguing possibilities. Place it upside-down (head-to-head) on top of your snare and you’re instantly approximating the Motown or Stax/Volt style, with the snare still cutting through albeit with an “invisible” tambourine player shading every stroke. (And you can do some serious rimshots and cross-sticking that way.) Another surprising discovery: Laid upright (head-up) on top of, say, a floor tom, the clearly audible sound of the host drum serves to beef up the pandeiro. Tweaking the tuning of both the Rio and the tom enabled Doppler-esque surdo effects.

The frame drum, originating in Angola and spread beyond to Puerto Rico, Panama and Bahia via the Portuguese, has been constantly evolving since the 1920s. Here is a mass-produced instrument that is a refreshingly old-school, authentic copy of a true pandeiro, right down to the zils. The top and bottom convex zils are inverted, facing each other like marching- or concert-band cymbals, hi-hat style. Sandwiched between each pair is a nearly flat disc, as tradition dictates. The LP Rio Stanton Moore pandeiro is a well-designed, extremely versatile addition for any percussionist.

My aforementioned expert consultant suggested that LP should replace the rivets holding the tuning rods to the shell with actual bolts, and that the Rio might be improved with a different, thicker-ply head-although the Remo Emperor is probably a calculated practical choice given its intended usage with sticks. A 10-inch pandeiro is the preferred size for samba, and LP’s Rio line offers this as well as the even smaller 6-inch tambourim (the latter without zils). To expand even further, LP could resurrect the bandir, a Middle Eastern progenitor of the snare drum with two wires running under the top head. One can only imagine where drummers could take such a collection of instruments, re-imagining the drumset once again, in the spirit of the slogan of Chicago’s AACM: “Ancient to the Future.” JT

Visit a pro audio retailer and almost every studio monitor speaker you see will have amplification built in. But visit a high-end audio store and … END_OF_DOCUMENT_TOKEN_TO_BE_REPLACED

Unless you’re a certified guitar nerd, the name Ted McCarty (1909-2001) probably means nothing to you. But no matter who you are, there’s little doubt … END_OF_DOCUMENT_TOKEN_TO_BE_REPLACED

In audio as in jazz, some of the most interesting trends happen far outside the mainstream. Hop onto internet forums dedicated to headphones, and you’ll … END_OF_DOCUMENT_TOKEN_TO_BE_REPLACED

On April 18, 1972, the Roland Corporation was founded in Osaka, Japan. Its mission: to produce electronic instruments and accessories for musicians. Two years later, … END_OF_DOCUMENT_TOKEN_TO_BE_REPLACED