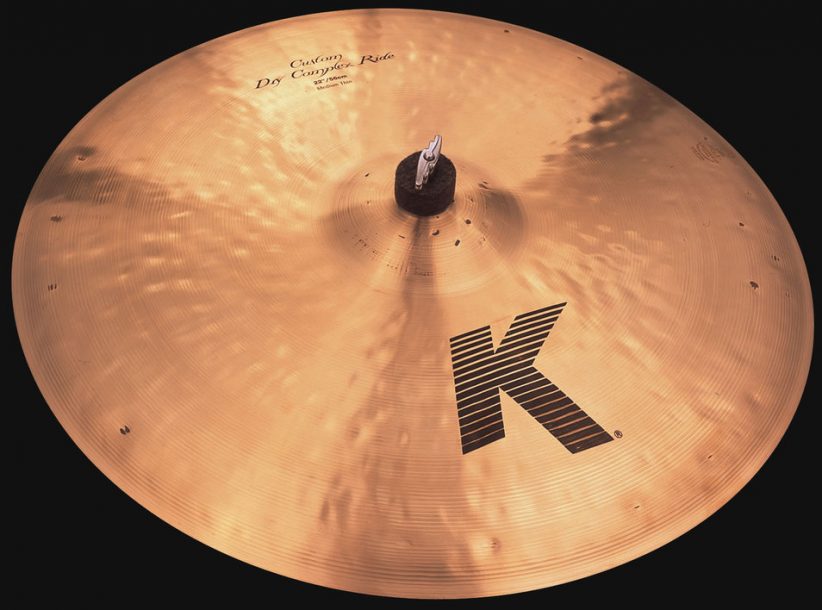 One size definitely does not fit all with cymbals-one drummer’s Alpo might very well be another rhythm player’s Chateaubriand. I raise this point because these two newest 22-inch additions to Zildjian’s K Custom line of specialized ride cymbals are so far off the beaten path, so wrong-is-right in design and execution, that when I began playing them for another drummer, the first words out of his mouth were, “Sounds like a broken cymbal.” And he meant that as a compliment!

The product of extended sonic collaborations between hard-swinging jazz drummer Bill Stewart and Zildjian Sound Labs’ master craftsman/designer Paul Francis, the K Custom Dry Complex rides come in both thin and medium-thin configurations. They reflect Francis’ remarkably original vision of the modern cymbal, as expressed in several fascinating instruments such as the K Custom Dry Light ride, a complete line of K Custom Special Dry rides, crashes and hi-hats and Zildjian’s wildly popular K Constantinople line. Still, as much as I admire Francis’ handiwork, the first time I played these cymbals they sounded so bizarre I was initially quite put off by the experience.

The Dry Complex rides sound like one thing when you are on top of them and quite another from a safe distance, and it was only after I heard other drummers play them that I began to get it. There is nothing pingy or sustaining or luminescent about these cymbals-they represent a highly specialized sound and feel. To these ears it was like a cross between playing a big, pliant cowbell, a pang cymbal, a dark choked splash and a nicely tempered garbage-can cover. You don’t so much ride on them as control a cascade of short, funky crash accents, imbued with a trashy metallic pang and lots of air in between each bad breath stroke. Build-up as such is negligible, and the Dry Complex rides have practically no sustaining qualities to speak of except under the most violent attack-and then at such a low pitch that it disappears into the low-frequency extremities of your kit.

The variety of articulations and nuances is thus relatively limited, and the dynamic range of these cymbals is tightly circumscribed-players who play for the phrase and who tune their kits wide open for maximum tone will not be drawn to these babies. However, for a pattern player who wants to essay a steady tattoo of complex rhythms and clearly discernible strokes, and who tunes his-or-her kit for a slappy, timbale-like effect-with more of an emphasis on attack than tone-this is a surprisingly engaging instrument to play. That’s because of a radically high profile, and a big broad, flat bell, with shallow tone grooves on top and a very light scoring on the bottom. As a result, this low-pitched instrument looks like a flying saucer and discretely gates itself in manner that recalls the sound of the ancient Turkish K Zildjian that Art Taylor employed on Coltrane’s original “Giant Steps.”

Perhaps as Zildjian evolves this basic design, some more refined versions of this sonic template might eventually yield a Constantinople-style cymbal with more traditional sonic attributes and a more balanced tonal response, a cymbal much like Art Taylor’s K. But for the moment, if you like the idea of a big, dry, pangy, cutting sound but crave a more vibrant cymbal character (for added ring, stick response and sustain), then check out the 22-inch Medium-Thin version of the Dry Complex ride (which would be a very happy match for rivets). As for the 22-inch K. Custom Thin Dry Complex ride, well, some drummers will not get this cymbal at all. Still, I applaud Zildjian for having the guts and the vision to develop and market an instrument with such a defiantly percussive sonic perspective and such a transitory niche appeal. Given its barking attack, trashy frequency mix and funky character, I suspect this skanky, crash-a-phonic cymbal is going to show up on a lot of drums kits as a change of pace sound, in much the same way as we currently deploy swish, pang and Chinese cymbals.

Visit a pro audio retailer and almost every studio monitor speaker you see will have amplification built in. But visit a high-end audio store and … END_OF_DOCUMENT_TOKEN_TO_BE_REPLACED

Unless you’re a certified guitar nerd, the name Ted McCarty (1909-2001) probably means nothing to you. But no matter who you are, there’s little doubt … END_OF_DOCUMENT_TOKEN_TO_BE_REPLACED

In audio as in jazz, some of the most interesting trends happen far outside the mainstream. Hop onto internet forums dedicated to headphones, and you’ll … END_OF_DOCUMENT_TOKEN_TO_BE_REPLACED

On April 18, 1972, the Roland Corporation was founded in Osaka, Japan. Its mission: to produce electronic instruments and accessories for musicians. Two years later, … END_OF_DOCUMENT_TOKEN_TO_BE_REPLACED