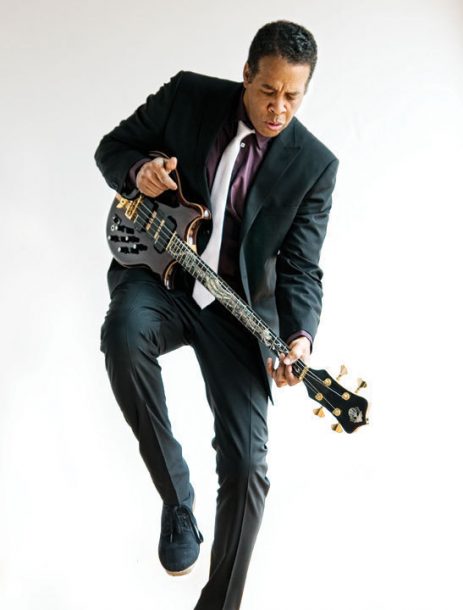 Stanley Clarke and his trusty Alembic

While the essence of jazz bass playing is the creative voice the individual player expresses through the instrument, equipment does play a vital role. In many cases, the development of bass technology was a response to new musical demands on players; in other cases, it was the cause of these demands. Each of the following products was chosen for its impact on acoustic and electric jazz bassists.

Laying It Down, Picking It Up

In 1946, Everett Hull developed the first pickup for upright bass, the Amplified Peg. Consisting of a microphone mounted inside the bass as part of the endpin, the “Ampeg” gave bassists a fighting chance on a loud bandstand. Finally freed from the “felt but not heard” syndrome, many musical developments in bass playing soon followed.

While the effect of the Fender bass on pop music is evident, its roots in jazz go all the way back to its inception in 1951. Bandleader Lionel Hampton was the first jazz artist to see the potential of the Fender Precision, acquiring one for his bassist Roy Johnson, who was later replaced by Monk Montgomery. As an energetic showman, Hamp undoubtedly appreciated the drive and punch of the electric bass in the rhythm section, and it traveled much easier than the doghouse. In 1960, Fender introduced the Jazz Bass, and the name clearly signals the intended market. The slimmer neck, and dual pickups gave the Jazz a more articulate voice-a quality that particularly shone through in the hands of Jaco Pastorius.

One of the biggest changes for upright bassists was the switch from gut to steel strings. Gut’s lower tension allowed for higher action and more acoustic volume, a prime concern in the days before amplification. The thump, fast decay and organic richness of gut are characterized by the tone of Paul Chambers. Steel strings produce more growl and sustain, allow for lower action to facilitate playing in thumb position, and have a smoother bowed tone-exemplified by the sound of players like Ron Carter and Eddie Gomez. While not the first brand of steel string available, Thomastik Spirocores are undoubtedly the most used string in jazz, having dominated the market since the 1960s. Their spiral steel core responds well to pizzicato technique, producing a big fundamental and plenty of sustain.

Up until the early 1960s, all electric bass strings were of the flatwound variety. The dark and somewhat thumpy tone provided solid accompaniment, but as bassists began to step into the foreground, they needed a string that could carve its own path through the mix. Players like Stanley Clarke, Jaco Pastorius and Larry Graham each contributed greatly to the musical development of the bass, and roundwound strings played a significant part in their tonal evolution. The Rotosound RS66 Swing Bass Strings were the first string of their kind, and bass tone has never been the same since.

Decades ago, upright bassists had to make due with amps designed for electric bass or even guitar. But after consulting with the legendary Ray Brown, the folks at Polytone introduced the Mini-Brute line of solid-state amps in 1968. Small and powerful with a focused tone, the Polytone became the new standard for upright bass amplification.

While the Alembic company’s origins are intertwined with the halcyon days of the San Francisco rock scene, when emerging bass superstar Stanley Clarke started playing one of their basses, the instrument gained a reputation as the ultimate ax for jazz-rock fusion. Alembic’s sophisticated electronics and artistic woodcraft laid the groundwork for hundreds of custom builders that followed.

Upright bass pickups were around for almost 30 years before Larry Fishman took a shot at it, but his BP-100 was the first pickup to reproduce the acoustic quality of the instrument. Its feedback resistance and relatively uncolored tone made it the most popular bass pickup for almost 20 years.

Fishman’s Bass Blender was another tone changer for the jazz bassist. The dual channel preamp allowed you to blend the directness of the pickup with the natural sound of a microphone-on the gig, through your amp. With separate EQ for each channel, phantom power for the mic and all-important phase switches, the Bass Blender was a major step forward, producing studio quality tone in a live setting.

Improvements in pickup technology sent bassists searching for amps with more hi-fi response. Acoustic Image took a new approach with their down-firing woofer coupled with a smaller front-facing mid/high frequency driver. The cabinet delivered low frequency extension previously unavailable in such a small form factor. And the use of switching power amp technology and a preamp designed specifically for piezo pickups gave the AI Contra the depth and tonal clarity upright players were longing for.

The extended range of the six-string bass gave the bassist new sonic territory, and players like Anthony Jackson and John Patitucci took the lead with the new instrument. While the first modern six-string bass was built for Jackson by luthier Carl Thompson, it was New York bassist and builder Ken Smith that really solidified the instrument with his design, knowledge of wood and technological advancements.

With shady origins as a bootleg source crafted by rogue Berklee instructors in the 1970s, the original Real Book shepherded several generations of jazz musicians through the essential repertoire. In recent years, music publishers Hal Leonard have released their own excellent (and legal) remake, The Real Book Edition 6, without the numerous mistakes that plagued the handwritten original. Now there is also an unrelated iPhone app called iReal b that will display chord charts as well as generate play-along tracks for practice. (At a recent rehearsal, all the players fired up their apps when a question about a chord change arose.)

Visit a pro audio retailer and almost every studio monitor speaker you see will have amplification built in. But visit a high-end audio store and … END_OF_DOCUMENT_TOKEN_TO_BE_REPLACED

Unless you’re a certified guitar nerd, the name Ted McCarty (1909-2001) probably means nothing to you. But no matter who you are, there’s little doubt … END_OF_DOCUMENT_TOKEN_TO_BE_REPLACED

In audio as in jazz, some of the most interesting trends happen far outside the mainstream. Hop onto internet forums dedicated to headphones, and you’ll … END_OF_DOCUMENT_TOKEN_TO_BE_REPLACED

On April 18, 1972, the Roland Corporation was founded in Osaka, Japan. Its mission: to produce electronic instruments and accessories for musicians. Two years later, … END_OF_DOCUMENT_TOKEN_TO_BE_REPLACED