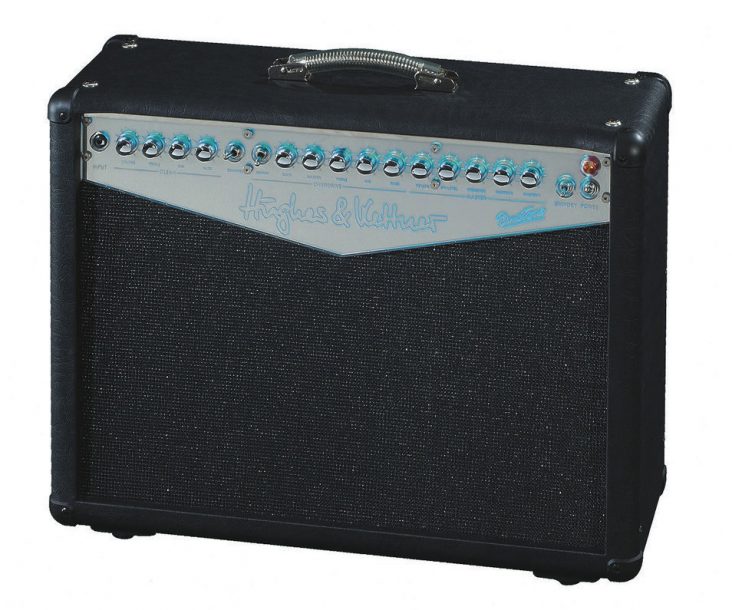 Take a look at the surface controls on Hughes & Kettner’s Duotone combo amp. That’s a lot of knobs–14, plus four toggle switches–which can only mean that it’s an amp built for the guitarist’s guitarist. This all-tube animal is for those who need something that goes from ultraclean to hideously dirty and serves up all degrees of grit in between. It’s too much amp for the straightahead, classic jazz-guitar tone set, to be sure. But if you’re the type who’d enjoy nothing more than to waste a perfectly good Friday night endlessly twiddling knobs to develop guitar tones for every conceivable musical situation, read on.

Also available as head unit, the combo version of the two-channel Duotone sizes up just smaller than a Fender Twin, sporting just a single 12-inch Celestion Vintage 30 driver and weighing 60 pounds–easily cartable by vehicle but not something you want to tote for a stretch of city blocks. The preamp section gets power from 12AX7 tubes and offers EQ control over bass mid and high levels on both channels. The overdrive channel has an additional boost toggle control for added high end, plus a knob for dialing in the level of desired gain. Another section of controls adds reverb, presence, effects loop and two master volume knobs, which lets you set two volume levels and toggle between them via the included footswitch. Additionally the footswitch has a button for channel switching and one for the boost feature. The power amp sports two EL34s, which ought to give know-it-alls more than a clue about the Duotone’s overdriven tone.

In 1965 amp pioneer Jim Marshall chose the EL34 as the tube to power his JTM45 guitar amp, perhaps unwittingly deciding the future sound of British rock and blues as the Marshall amplifier became nearly as famous as the guitarists who employed it. Getting that classic supercharged heaviness from the Duotone is just a matter of cranking that master volume and letting it rip, but in doing so you’ll shake the foundations for sure. Rated at 50 watts, the Duotone sounds at least twice as loud as expected. The Vintage 30 driver is the likely culprit. Celestion designed that thing to be loud, and it can handle the volume. Pushed with high output the Duotone maintains focus, even in the low end when the bass control is cranked.

While the overdrive channel allows for as many dirty tones as you can dream up (as long as you always dream in that ratty, British realm), I’ve always preferred taking a clean channel to town to achieve more natural distortion sounds. Initially it took days for me to get around to testing the Duotone’s overdriven clean channel, because I was in love with the way my old Epiphone Joe Pass jazz box sounded coming out of the thing clear as a bell. First thing I noticed was the complete lack of noise when the Duotone is idle. Then, after dialing in a good, bottom-heavy tone, it was all about the clarity of the clean channel. Add to it a touch of reverb–the spring reverb inside the Duotone is a smooth-sounding Accutronics unit, not too springy–and you have a perfectly passable classic jazz sound. As you crank the clean channel’s volume knob the tone begins to break up into overtone rich distortion that in the lower stages lends just the right amount of grit for funk textures. At its fully overdriven height, the sound is ripping but controlled–and to my ears it’s a more pleasing, less edgy and modern distortion than what’s offered by the amp’s other channel.

The effects loop is a standard parallel loop that mixes the processed signal with the dry signal from the input. The controls allow you add anything from just a touch of the effects to a blizzard of processed sound. It would have been a nice touch to include a circuit into the amp that could cut the loop out entirely and have that option controllable by footswitch. The footswitch does let you toggle between those two master volume settings, meaning you can create interesting dynamic juxtapositions at the stomp of a foot. Next to the footswitch input on the Duotone’s rear panel are outputs that accommodate additional speakers, should you need more volume than that Vintage 30 generates. Plug your ears.

Another circuit I wish Hughes & Kettner would include (but know the company won’t) is one to turn off the amp’s “house lights.” When you flip the power switch, a backlight bathes the Duotone’s 14 knobs in a light blue glow. It does look cool, and in fact a glowing amp surface is kind of a Hughes & Kettner trademark, but you wouldn’t want your flashy amp stealing the spotlight from your fretwork, would you?

Visit a pro audio retailer and almost every studio monitor speaker you see will have amplification built in. But visit a high-end audio store and … END_OF_DOCUMENT_TOKEN_TO_BE_REPLACED

Unless you’re a certified guitar nerd, the name Ted McCarty (1909-2001) probably means nothing to you. But no matter who you are, there’s little doubt … END_OF_DOCUMENT_TOKEN_TO_BE_REPLACED

In audio as in jazz, some of the most interesting trends happen far outside the mainstream. Hop onto internet forums dedicated to headphones, and you’ll … END_OF_DOCUMENT_TOKEN_TO_BE_REPLACED

On April 18, 1972, the Roland Corporation was founded in Osaka, Japan. Its mission: to produce electronic instruments and accessories for musicians. Two years later, … END_OF_DOCUMENT_TOKEN_TO_BE_REPLACED