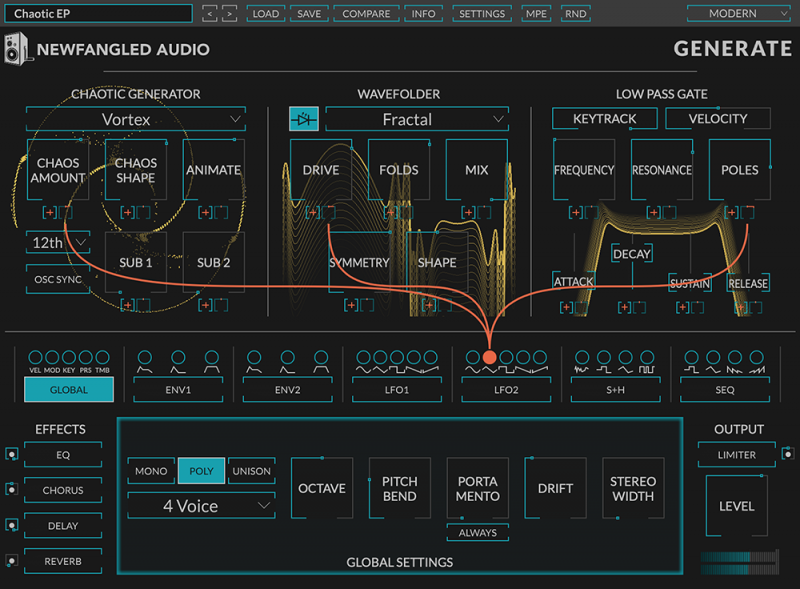 Inspired by the ideas of legendary synthesizer designer Don Buchla, Newfangled Audio’s Generate polysynth app features five “chaotic generators,” each of which can be modulated either predictably or unpredictably. This means that you can create a sound that randomly distorts, adds and/or subtracts harmonics in a regular pattern, turns from a sine wave to total noise and back again within a given timeframe, or all of the above, or vice versa—and much more.

As veteran JazzTimes followers know, every year around now we present a report on the annual National Association of Music Merchants (NAMM) show in Anaheim, … END_OF_DOCUMENT_TOKEN_TO_BE_REPLACED

Every jazz fan knows that intimate clubs like the Village Vanguard sound different from large venues like Carnegie Hall. Clearly, the space we listen in … END_OF_DOCUMENT_TOKEN_TO_BE_REPLACED

The Roland corporation of Japan only manufactured its TR-808 Rhythm Composer drum machine for three years, from 1980 to 1983, but that short time was … END_OF_DOCUMENT_TOKEN_TO_BE_REPLACED

I got a shock when I visited a T-Mobile store last May after losing my smartphone. I asked for the latest Samsung Galaxy S-series model—but … END_OF_DOCUMENT_TOKEN_TO_BE_REPLACED