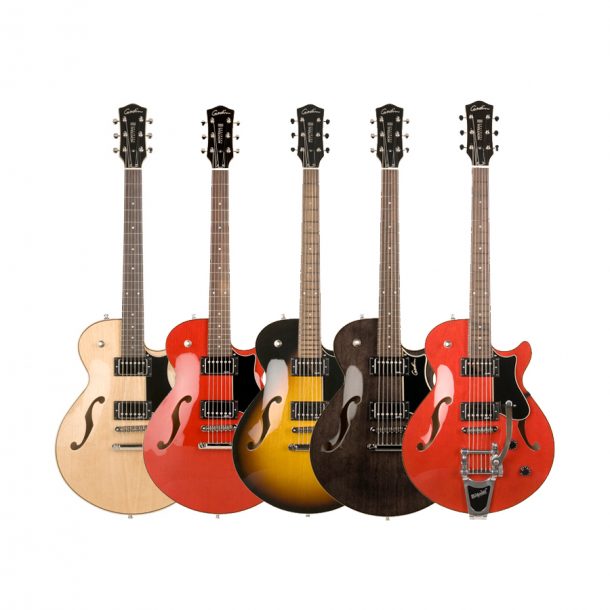 Made in Canada, where Godin has been based since its inception in the early 1970s, the Premiere features a Canadian wild cherry top, back and sides, with a spruce “breathe-through” carved core that, Godin says, “promotes free airflow through the interior center block.” Other features include a three-way toggle switch along with one volume and one tone knob; a 24 3/4-inch scale, mahogany set-neck with rosewood fingerboard; double-bound binding; high-gloss custom polished finish; a contoured high-gloss headstock with high-ratio vintage style tuners; and the ResoMax bridge system by Graphtech with stop tailpiece. Available finishes include Natural HG, Trans Red HG, Trans Black HG and Sunburst HG.

The Bigsby version, which comes in Trans Red HG only, incorporates the above features plus a Bigsby tremolo.

Visit a pro audio retailer and almost every studio monitor speaker you see will have amplification built in. But visit a high-end audio store and … END_OF_DOCUMENT_TOKEN_TO_BE_REPLACED

Unless you’re a certified guitar nerd, the name Ted McCarty (1909-2001) probably means nothing to you. But no matter who you are, there’s little doubt … END_OF_DOCUMENT_TOKEN_TO_BE_REPLACED

In audio as in jazz, some of the most interesting trends happen far outside the mainstream. Hop onto internet forums dedicated to headphones, and you’ll … END_OF_DOCUMENT_TOKEN_TO_BE_REPLACED

On April 18, 1972, the Roland Corporation was founded in Osaka, Japan. Its mission: to produce electronic instruments and accessories for musicians. Two years later, … END_OF_DOCUMENT_TOKEN_TO_BE_REPLACED