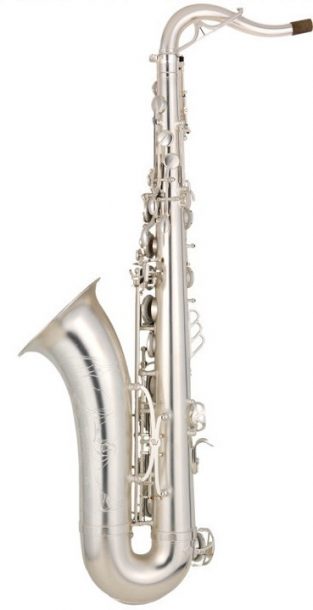 When it comes to appearance versus function, most musicians I know, myself included, favor the latter. Some of us prefer an aged and weathered look to our instruments anyway, perhaps suggesting a link to musical history or providing proof that our horns are being put through their paces on the bandstand. Let’s face it-vintage is cool. That said, when this classic Mark VI owner took a look at Theo Wanne’s new Mantra tenor saxophone in its silver-plated finish, vintage didn’t seem so cool anymore. (Of course, Theo has you covered on all aesthetic fronts: I tested the silver-plated prototype, but the production models will also be available in Vintified, Black Nickel and standard Honey Lacquered versions.)

The mostly U.S.-made Mantra-$3,995 online-is a beautiful instrument, boasting a reticulated silver finish that is matte and satiny without evoking a high-end kitchen appliance. Its only engravings are of a woman in a flowing gown on the inside/center of the bell, right next to an Art-Deco-ish Theo Wanne logo on the outside. The relief on the prototype is very pronounced in the sharp corners of the engraved lines; it’s not going to snag a thread on your sweater or anything, but it could be filed down a hair. Its navy blue felts are an attractive touch, and they pair nicely with the neck plug, which is crafted from dark-stained Lacewood, complete with two black rubber gaskets to tighten the seal when in place.

The horn is slightly heavier than what I’m used to, and with a four-point bell/body brace it’s definitely sturdy in its construction but not bulky or cumbersome. In fact, it’s just the opposite: Ergonomic in feel, my hands hug every inch that they need to be in contact with, without reaching or feeling stretched, even when playing the left-hand palm keys. There are adjustable side and stack keys that can be tweaked to suit any player, and a triple neckstrap hook, which might be my favorite feature, as it enables players of different heights and builds to achieve just the right mouthpiece angle while maintaining a comfortable stance.

Despite a higher action, playing with speed and fluidity comes easily. Playing long chromatic glides up the length of the horn requires minimal effort, and the same goes for large intervals. The transition between the low E-flat and C spatula keys felt somewhat clunky, but the left-hand setup was extremely comfortable.

I played the Mantra with a JodyJazz hard rubber 8* mouthpiece and a Vandoren ZZ 3, and was able to maintain a large, robust tone in all registers and at all levels of dynamics. (The production models will ship with a metal Mantra mouthpiece, unavailable at the time of this review.) The saxophone definitely blows freely yet never feels out of control, and it offers just enough resistance that overblowing can be achieved when the effect is desired.

This horn projects really well, and maintains an edge to its fat tone without being shrill. A lot of this edge could be due to its waved silver-plated brass resonators, which fill the majority of the tone holes throughout the instrument. Altissimo simply whistles out of the bell with ease and a hearty tone. Despite its overall consistency with pitch, at times I did have trouble with some intonation in the extreme registers; the horn blew flatter in the low end, with a significant (yet common) difference in pitch between high palm F and high front F (the latter being lower). But as with any player and instrument combination, these kinks usually work themselves out after weeks or months of playing, and to be fair, I demoed the horn for a week.

The most innovative part of this horn is its patented new neck design. It features a super-strong titanium brace that is welded only at the octave pip and base. Attached to that, in the center of the brace, is the actual octave key, which pivots at the center to open and close via a ball-bearing rotor. With the welding only at these two points, the neck is permitted to resonate freely and fully.

In all, the Mantra is an eye-catcher with excellent playability and outstanding sound. It isn’t gaudy or flashy with lack of function, but designed with class and intelligence.

Visit a pro audio retailer and almost every studio monitor speaker you see will have amplification built in. But visit a high-end audio store and … END_OF_DOCUMENT_TOKEN_TO_BE_REPLACED

Unless you’re a certified guitar nerd, the name Ted McCarty (1909-2001) probably means nothing to you. But no matter who you are, there’s little doubt … END_OF_DOCUMENT_TOKEN_TO_BE_REPLACED

In audio as in jazz, some of the most interesting trends happen far outside the mainstream. Hop onto internet forums dedicated to headphones, and you’ll … END_OF_DOCUMENT_TOKEN_TO_BE_REPLACED

On April 18, 1972, the Roland Corporation was founded in Osaka, Japan. Its mission: to produce electronic instruments and accessories for musicians. Two years later, … END_OF_DOCUMENT_TOKEN_TO_BE_REPLACED