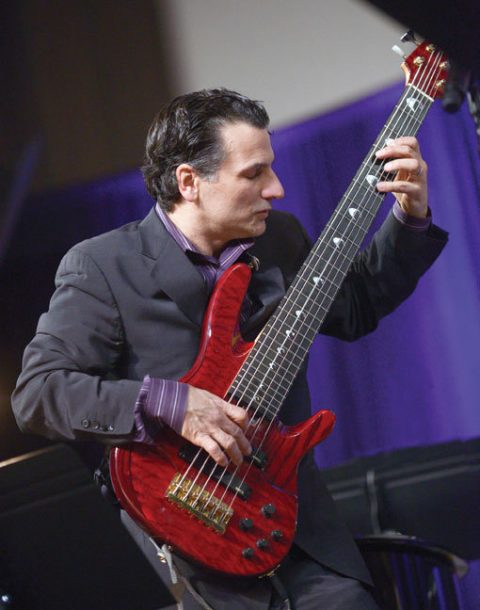 The book, aimed at double bassists and bass guitarists alike, is being released in multiple instalments. Episode One offers six chapters, with exercises ranging from moderately easy to challenging; the lessons open with a focus on intonation and single-string shifting before moving to arpeggios and closing with a major arpeggio etude based on a theme by Bottesini. The project is something of a sequel to Patitucci’s book 60 Melodic Etudes.

“I felt like it would be good to do a book that would show the directions I’ve been going as a teacher and as a player,” Patitucci said recently from Atlanta, where he was playing sessions for a recording by pianist and composer Ted Howe. “A lot of books offer exercises in a very rudimental, up-and-down technical way. I wanted to develop a book using arpeggios in a very melodic way. Instead of just sounding like you’re running scales, you have the melody that arpeggios can bring. That has been influenced by Wayne-his stuff sounds like these combinations of sounds and arpeggios. There is obviously some chromaticism and scales mixed in, but the lyricism from the way he combines arpeggios is quite astounding. Obviously it’s a little harder to get around on the bass, but it’s a worthy challenge.” Episode One also includes an emphasis on hearing and understanding intervals. “That helps with ear training,” the bassist said. “Using your ear to identify what intervals are coming at you is a powerful thing.”

The Kindle project isn’t Patitucci’s first foray into new media. Last year, he launched an interactive bass school through ArtistWorks; the online program has Patitucci provide video tutorials and written materials to students all over the globe, and give commentary on students’ work. “It takes kids from, ‘This is how you stand and hold it,’ all the way through grooving and tradition and jazz playing and information about Brazilian and Afro-Cuban stuff,” he said. “There are hundreds of lessons there, and basically a bass book of downloadable stuff you can get.”

The end game, Patitucci explained, is always to lead players in the direction of freedom, achieving technical mastery and accomplishing high-level “hearing” in order to free themselves up to more fully play in the moment, to connect directly with the music and fellow musicians: “If you’re struggling technically, it gets in the way of your rhythm and everything else. It’s all really about tools that will help you play more musically and expressively, with more richness, no matter what style. It’s to help you be freed up on the instrument no matter what music you play on the bass, to get around freely.

The Brooklyn native, 53, who spent his teenage years in Northern California and later lived in Los Angeles before returning to the New York area, has plenty more on his CV in terms of education. He recently began his second full year as an artist-in-residence at the Boston-based Berklee Global Jazz Institute, headed by his Shorter Quartet bandmate Danilo Pérez. A music professor at the City College of New York for a decade, Patitucci, who followed his hero Ron Carter into that position, earlier served as artistic director of the Bass Collective in New York. He has also worked with the Thelonious Monk Institute and Betty Carter’s Jazz Ahead program.

To some degree, Patitucci views today’s culture of formal jazz education as akin to an alternative mentorship. He thinks jazz degree programs might be the next-best substitute for the type of informal on-the-road training once more widely available to younger players. “Schools are trying to pick up the slack,” he explained. “Nothing can replace being on a gig for years and going on the road and playing hundreds of gigs, but we’re trying to do our best to mentor and put students in performing situations and teach them history and practice and theory-and the practicality of it.”

Visit a pro audio retailer and almost every studio monitor speaker you see will have amplification built in. But visit a high-end audio store and … END_OF_DOCUMENT_TOKEN_TO_BE_REPLACED

Unless you’re a certified guitar nerd, the name Ted McCarty (1909-2001) probably means nothing to you. But no matter who you are, there’s little doubt … END_OF_DOCUMENT_TOKEN_TO_BE_REPLACED

In audio as in jazz, some of the most interesting trends happen far outside the mainstream. Hop onto internet forums dedicated to headphones, and you’ll … END_OF_DOCUMENT_TOKEN_TO_BE_REPLACED

On April 18, 1972, the Roland Corporation was founded in Osaka, Japan. Its mission: to produce electronic instruments and accessories for musicians. Two years later, … END_OF_DOCUMENT_TOKEN_TO_BE_REPLACED