Skip to content
Become a member and get exclusive access to articles, live sessions and more!
Start Your Free Trial
Home > Reviews > Gearhead: "Is That a Cello?" 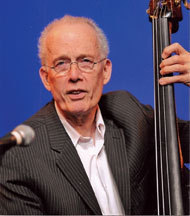 Acoustic bassists of a certain age will remember Rufus Reid’s step-by-step, photo-illustrated instructions on taking a double bass on a plane, included in his classic book The Evolving Bassist, originally published in 1974. In those days, a traveling bassist could opt to use a fiberglass trunk to transport the instrument in luggage, or simply purchase a half-fare ticket for it and place it in the cabin.

“When I first started traveling, we didn’t have bass cases, we just took the bass on the airplane and put it on a bulkhead seat and strapped it in,” says Buster Williams, 71. Williams, whose Something More group has U.S. and European dates in 2014, has played a prized, century-old Hawkes bass since 1963, when he bought it in London while on tour with Sarah Vaughan. “You never knew what to expect, as far as the flight attendant standing in the way or the captain refusing to allow the bass on the plane. But you always found a way to make it work.”

Later, airlines variously refused to let basses be transported in the cabin. Fast forward to the terrorist attacks of 9/11 and the subsequent heightened security: The upshot was a profusion of confusing size restrictions and additional charges that often varied from airline to airline. As several bassists have recounted, the answer to the gate-security question “Is that a cello?” was always, “Yes.”

Jay Leonhart addressed the traveling bassist’s woes humorously in “Bass Aboard a Plane,” a song from his one-man show, The Bass Lesson. “If you wanna ’cause a problem, if you wanna ’cause some pain,” he sings, “simply go down to your local airport, and try to put a bass aboard a plane. … The ticket lady looks at you in horror, she stares at you in disbelief.”

Not long ago, Leonhart, 73, decided to quit fighting with the airlines and stop flying with his primary bass, an Italian instrument made for the Gibson factory in 1939 and renovated by the Kolstein shop that was formerly owned by George Duvivier. “I’ve left too many basses in storage at airports in the last two years,” he says. “They don’t want your bass on the plane.”

Williams reached the same conclusion: “Up until about five years ago I traveled with my bass. But it became so stressful-the closest to impossible that you can get. If you did take a chance and take your bass on the road, the cost would sometimes outweigh the real practicality of it. And then you’d run into situations where they just refused to take the bass, for no other reason than they’d made a decision not to take basses or cellos.”

So what’s the solution? Some bassists, including Williams, Esperanza Spalding and Dave Holland, have used basses with detachable necks, including David Gage’s Czech-Ease Road Bass, which has an abbreviated body but boasts playing dimensions similar to a standard upright. Many have tried upright electric basses, with varying degrees of satisfaction. Leonhart says he’s been thinking about picking up the electric bass again, at least as a backup, after having played it in the ’70s with guitarist Jim Hall.

Williams and Leonhart, though, both prefer to rent or borrow a good upright for any gig requiring a flight. “I just jump on the plane and arrange it in advance,” Leonhart says. “That means keeping a nice page in your book about where you’re going to try to get a bass from, and who’s going to pay for it.”

Adds Williams, “I have a very stringent tech sheet that specifies an adjustable bridge, and the sort of pickup I want, and the type of bass it should be.”

Flying with a bass could get much easier soon, thanks to the 2012 FAA Modernization and Reform Act, which was slated to go into effect by February. The American Federation of Musicians successfully lobbied for an addition allowing musical instruments to be checked as long as the linear dimensions do not exceed 150 inches and the weight does not exceed 165 pounds, far more lenient than before.

The International Society of Bassists is urging its members to carry a printed copy of the legislation when they travel. “We need the airlines’ support so that musicians can work,” says Madeleine Crouch, the ISB’s general manager. “Airlines could even promote themselves as job creators if they’d only be nice to us!”

Visit a pro audio retailer and almost every studio monitor speaker you see will have amplification built in. But visit a high-end audio store and … END_OF_DOCUMENT_TOKEN_TO_BE_REPLACED

Unless you’re a certified guitar nerd, the name Ted McCarty (1909-2001) probably means nothing to you. But no matter who you are, there’s little doubt … END_OF_DOCUMENT_TOKEN_TO_BE_REPLACED

In audio as in jazz, some of the most interesting trends happen far outside the mainstream. Hop onto internet forums dedicated to headphones, and you’ll … END_OF_DOCUMENT_TOKEN_TO_BE_REPLACED

On April 18, 1972, the Roland Corporation was founded in Osaka, Japan. Its mission: to produce electronic instruments and accessories for musicians. Two years later, … END_OF_DOCUMENT_TOKEN_TO_BE_REPLACED