Skip to content
Become a member and get exclusive access to articles, live sessions and more!
Start Your Free Trial
Home > Reviews > Gearhead: Behind the Rebirth of D’Angelico Guitars 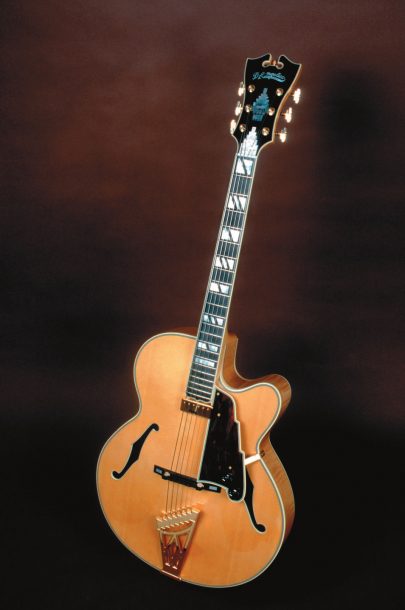 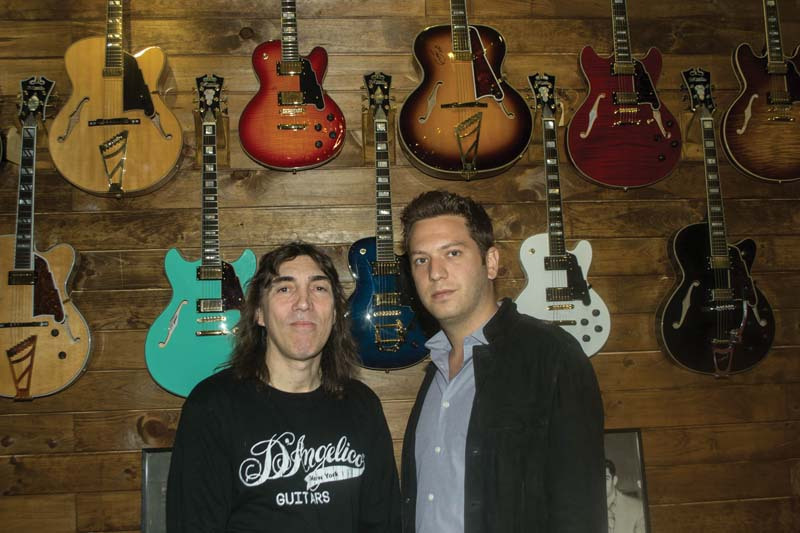 When Steve Pisani, president of sales for the D’Angelico guitar company, wants to make a point about the desirability of his brand, he tells a story about Les Paul. “Back in the day,” says Pisani, “Les Paul tried Bucky Pizzarelli’s D’Angelico. He took it to play and a year later he still had it. One day Les was doing a concert and Bucky saw a picture of Les using his D’Angelico. He called him up and said, ‘Les, listen, I want my guitar back.’ Les says, ‘I’ll give you two [Gibson] Les Pauls for it!’ Bucky told him to go jump in a lake.”

Today, if Paul were still around, he wouldn’t have to borrow a D’Angelico. In 2013, after a dormancy of a half-century, the brand began building and distributing guitars again, under the tutelage of Pisani, CEO Brenden Cohen and their partner John Ferolito Jr., who runs D’Angelico’s parent company, the New York-based GTR Store. Today, the company’s newly produced, much-sought-after archtop hollowbody, solidbody and semi-hollowbody models are available via hundreds of American dealerships-both brick-and-mortar and online-as well as in 20 foreign countries. Mandolins and acoustics are scheduled to follow.

“This is a very iconic guitar,” says Cohen, and although he does have a vested interest in stating this, the facts back him up. The original run of D’Angelicos consisted of 1,164 known pieces, the details behind the crafting of each one kept in a ledger by master luthier John D’Angelico, who founded the company. Many survive, in various conditions, and when they do turn up for sale, at auctions or privately, they have been known to bring in tens of thousands of dollars. “Sometimes they change hands among players; sometimes people trade three or four guitars to get one of these guitars,” says Pisani.

Earlier D’Angelico fans included the great Chet Atkins, and among the better-known present-day champions of the line are Eric Clapton, Pete Townshend, Robert Randolph, Susan Tedeschi, Aerosmith’s Joe Perry and, as Pisani and Cohen make sure to stress, numerous jazz artists, among them Jonathan Butler and Freddy Cole sideman Randy Napoleon. “We specialize in guitars for jazz,” says Pisani. “Jazz guitarists have always wanted a D’Angelico.”

By “always” he means the better part of the past 80-plus years, when D’Angelicos were in use regularly among players in jazz orchestras and small combos alike. D’Angelico, Master Guitar Builder: What’s in a Name?, a 2008 book published by Centerstream, includes numerous paeans by guitarists active as far back as the WWII era who still had fond words for their D’Angelicos and for the man who fashioned them.

John D’Angelico, born in New York’s Little Italy in 1905, was, according to company histories, a natural at the craft, first apprenticing at age 9 for an uncle who made mandolins, violins and flat-top guitars. D’Angelico took over the shop when his uncle died and in 1932 opened his own on Kenmare Street in Lower Manhattan. At the same time he began building his own f-hole archtop guitars, each one meticulously by hand, and by 1937 had largely concentrated on four models-the A, B (both of those dropped by the ’40s), Excel and New Yorker-made to regular specifications but often customized to suit a buyer’s desires. (D’Angelico also built some round-hole archtops and mandolins, but his reputation rests primarily on his more plentiful f-hole models.)

In 1952 D’Angelico hired an assistant, Jimmy D’Aquisto, who himself became a master luthier and took over the company upon D’Angelico’s premature death in 1964. D’Aquisto continued to create guitars under his own name, and from the ’60s until now the D’Angelico guitar ceased production, with the brand passing hands among various owners until it was purchased in 2011 by John Ferolito Sr., owner of the Arizona Beverage Company and a guitar aficionado. With his son, John Jr., Cohen and Pisani at the helm, a business plan was launched and two years later the first reissues and newly designed D’Angelicos made their way into the hands of players. D’Angelico’s Korean-made Standard Series, which widens the brand’s oeuvre to include everything from ES-335-style semi-hollowbodies to an electric bass, starts at around $1,300. The company’s Pro Series, manufactured in Kalamazoo, Mich., starts at around $4,000 and its USA Master Builder line runs $10,000-$12,000. Those guitars, including faithful replicas of D’Angelico’s famous traditional vintage models, are handcrafted in Arroyo Grande, Calif., by builder Gene Baker and his team.

“We are cloning models that John D’Angelico was building in the 1930s and ’40s,” says Baker. “The only thing modern about what we do is the machinery used in [the] guitar production. … We even go to extra lengths to create a few items that D’Angelico handmade himself, like the brass pickguard bracket and hand-scribed inlays. And we use many flathead brass screws [because the] Phillips screw had not been designed yet [in D’Angelico’s day].”

Offering D’Angelico-brand instruments at student-friendly prices has been a prime goal for Pisani and Cohen since the rebirth of the company. “For us, it’s about quality, legacy-continuing the legacy of this great builder-and price,” says Pisani. “There has to be a price point that allows people to play the guitars.” dangelicoguitars.com

Visit a pro audio retailer and almost every studio monitor speaker you see will have amplification built in. But visit a high-end audio store and … END_OF_DOCUMENT_TOKEN_TO_BE_REPLACED

Unless you’re a certified guitar nerd, the name Ted McCarty (1909-2001) probably means nothing to you. But no matter who you are, there’s little doubt … END_OF_DOCUMENT_TOKEN_TO_BE_REPLACED

In audio as in jazz, some of the most interesting trends happen far outside the mainstream. Hop onto internet forums dedicated to headphones, and you’ll … END_OF_DOCUMENT_TOKEN_TO_BE_REPLACED

On April 18, 1972, the Roland Corporation was founded in Osaka, Japan. Its mission: to produce electronic instruments and accessories for musicians. Two years later, … END_OF_DOCUMENT_TOKEN_TO_BE_REPLACED