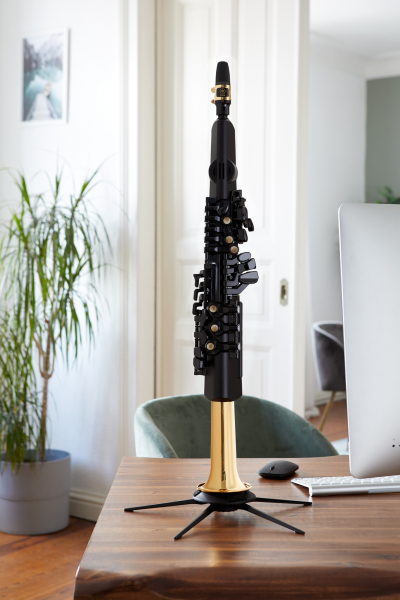 Meant for players of all levels, the Yamaha YDS-150 Digital Saxophone distinguishes itself from MIDI wind controllers by incorporating the key structure of a traditional saxophone, which makes it feel more natural to the touch. Its real brass bell enhances the instrument’s acoustic properties as well, allowing it to vibrate much like the real thing. But unlike the real thing, the YDS-150 lets you choose from more than 50 onboard sounds, connect to a mobile device via Bluetooth, and practice through headphones. $1,078 MSRP | usa.yamaha.com

Visit a pro audio retailer and almost every studio monitor speaker you see will have amplification built in. But visit a high-end audio store and … END_OF_DOCUMENT_TOKEN_TO_BE_REPLACED

Unless you’re a certified guitar nerd, the name Ted McCarty (1909-2001) probably means nothing to you. But no matter who you are, there’s little doubt … END_OF_DOCUMENT_TOKEN_TO_BE_REPLACED

In audio as in jazz, some of the most interesting trends happen far outside the mainstream. Hop onto internet forums dedicated to headphones, and you’ll … END_OF_DOCUMENT_TOKEN_TO_BE_REPLACED

On April 18, 1972, the Roland Corporation was founded in Osaka, Japan. Its mission: to produce electronic instruments and accessories for musicians. Two years later, … END_OF_DOCUMENT_TOKEN_TO_BE_REPLACED