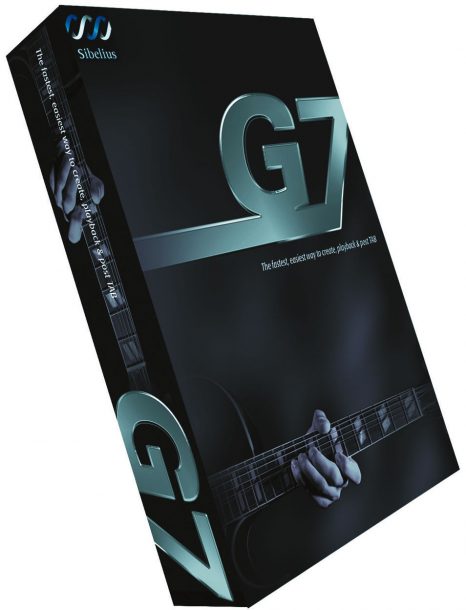 Guitarist-composers who wanted to create sheet music may have felt overwhelmed or alienated by applications like Finale, which appeal mostly to composers who create large scores for multi-instrument ensembles. What many guitarists want is a simpler program that can bridge the gap between standard music notation and tablature, the system guitarists tend to prefer as it marks fret-placements on the strings instead of notes on a set of staves.

Sibelius, which makes its own full-blown notation software, answered the six-stringers’ call in 2003 with G7, a notation package designed by guitarists for guitarists. Available for both Windows and Mac, it incorporates a wealth of features to turn music composed on the fretboard into printable scores and lead sheets, computer-based MIDI, tablature and audio files, which can be easily burned to CD.

Only thing is, that first version of G7 was a bit undercooked. There were some bugs in the code that should have been fixed prior to release, but my gripe was that one of its most alluring capabilities, the ability to track information from a MIDI guitar onto the screen in real time, didn’t work effectively, at least not for me. (Admittedly, I use a less-than current MIDI guitar setup: an old Roland GK-1 pickup and the early, Roland GR-1 guitar-synth module.)

But I’m happy to report to all fellow synth guitarists living in the Dark Ages that the latest version of G7, dubbed Kontakt Edition, clears that problem up. Notes played on a MIDI guitar track smoothly in the updated program-as long as you don’t give it too much to handle at a time. A few of my nastier runs didn’t translate onscreen as played. That’s due in part because I’m a sloppy soloist, but it’s also because G7 isn’t necessarily a tool for notating fretboard heroics. First and foremost, this software is a composer’s tool.

Owning a MIDI-equipped guitar isn’t necessary to use G7, as the program has other features for inputting notes and chords. The easiest of these is a clickable onscreen fretboard that allows you to select the frets of a chord in your song, or, one-by-one, the notes to a fill or a solo, and watch them appear on the staff or in the tab display. This can be a time-consuming procedure. Music can also be imported via MIDI music file, ASCII tab (like you would find online at a resource like Olga.org), Sibelius or Finale files. That method proves to be the best way to import preexisting music into G7, but sheet music and tablature can be scanned into the program using a regular optical scanner. If you have ever used this scanning technique with other notation software, you know that its success is dependent how busy the piece of music is: fewer notes, and the clearer your source document, means better onscreen results.

But the most efficient way to get the music into a project is to play it, and for this you need a MIDI guitar and a MIDI input on your computer. Should you need those items, there are a number of breakout box devices and less-expensive MIDI-to-USB cables available these days to satisfy that need, adding anywhere from $30 to hundreds more to G7’s $149 price tag. Owners of the previous version of G7 can upgrade for $29. When it came to having G7 track my chord voicings, it was a crapshoot whether or not it guessed right where my fingers were. Play a standard D chord at the fifth fret and it will surely recognize the triad, but it might wrongly notate that it’s been played in the first position. Or it may get it right. Using the virtual fretboard it’s easy to replace a misread chord with your intended inversion. And a panel of selectable notation marks lets you notate bends, slides, rests and other nuances that may need to be added.

Once your masterpiece has been completed, G7 allows for further embellishments to be made upon it. You can have up to 16 tracks of orchestration in a single composition, which lets you arrange a tune for a few instruments. The arrangements can then be auditioned as audio and later exported as audio tracks to either sound files or CD. This latest version of G7 adds a library of better-sounding instruments to the software, taking advantage of Native Instruments’ ever-evolving synth technology. Even if the audio tracks you can export from G7 don’t sound convincing as actual band tracks (why would they?), the cuts work great for demo purposes.

All of its wonderful capabilities aside, a successful session in G7 depends on how long you have used the software. Those well versed in other notation software programs might jump in and move comfortably through G7’s interface right off the bat. Guitarists just discovering the joys of computer-aided composing will likely need to spend hours clicking and cursing before it gets easy. The interface, however, is as user-friendly as I can imagine any program like this being, save for something that downloads a guitarist’s thoughts straight from the brain. Actually, that can’t be too far away.

Visit a pro audio retailer and almost every studio monitor speaker you see will have amplification built in. But visit a high-end audio store and … END_OF_DOCUMENT_TOKEN_TO_BE_REPLACED

Unless you’re a certified guitar nerd, the name Ted McCarty (1909-2001) probably means nothing to you. But no matter who you are, there’s little doubt … END_OF_DOCUMENT_TOKEN_TO_BE_REPLACED

In audio as in jazz, some of the most interesting trends happen far outside the mainstream. Hop onto internet forums dedicated to headphones, and you’ll … END_OF_DOCUMENT_TOKEN_TO_BE_REPLACED

On April 18, 1972, the Roland Corporation was founded in Osaka, Japan. Its mission: to produce electronic instruments and accessories for musicians. Two years later, … END_OF_DOCUMENT_TOKEN_TO_BE_REPLACED