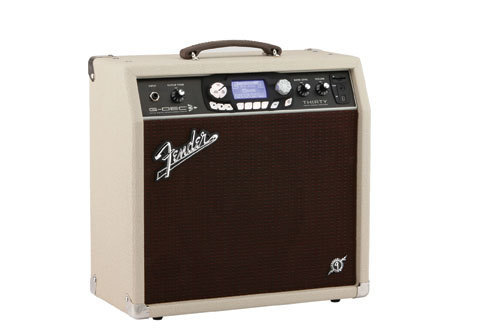 Play-along technology has always evolved with the times-from well-worn Jamey Aebersold LPs through cassette playback and the digital and online revolutions. Over the past half-decade, Fender’s G-DEC guitar amps-the name stands for Guitar Digital Entertainment Center-have presented yet another paradigm shift. In one tidy, solid-state-drive-toting box, the company offers a seemingly endless selection of tones and jam-along loops, and piles on even more possibilities via included software. This year’s special-run Blues edition of the G-DEC 3 Thirty ($400 online), with its focus on American roots styles and their ilk, is the model most JazzTimes readers will want.

There’s a lot going on with this machine, so let’s cover the basics. The Blues pumps 30 solid-state watts through a 10-inch speaker encased in a cabinet covered in blonde vinyl. A front control panel includes input and headphone jacks, skirted knobs that control tone and volume, a mini-USB port and a slot for an SD storage card. (More jacks are around back: second guitar, line out, optional footswitch, aux.) In the center of the panel are a display screen, the much-used encoder knob, and soft buttons that do everything from tweak guitar sounds and backing tracks to control phrase sampling and overdubbing and operate a chromatic tuner.

Right out of the box, this thing is a blast. Rolling the encoder knob clockwise will begin your excursion through dozens of loop-and-tone combinations. The loops, some of which were recorded by Fender endorsers like guitarist Jim Campilongo and bassist Reggie Hamilton, range far and wide: Along with drum beats and MIDI metronome clicks, there’s James Brown-style funk, Western Swing gallops, Chicago shuffles, slow blues and a lot more. Straight-ahead jazzers get theirs too, sort of: A jazz rhythm section offers driving swing, a “Take Five” groove, some lazy, drifting changes, a samba feel and other variations. They might not be Berklee-hip, and the piano could sound better, but they certainly get the job done.

The customization process, however, is where minutes turn into hours. Not satisfied with the 100 preset guitar tones? There are all sorts of jazz-friendly amp models, Fender and non-Fender alike, that can be combined with a deep well of effects. If that’s not enough, hook the G-DEC up to a computer loaded with the included Fender Fuse program for more tonal options, and to trade sounds and loops online. Similarly, backing tracks can be pitch-shifted in half-steps, and sped up or slowed down-all with a noticeable drop in audio quality, however. Fender offers more tracks, in MP3 and WAV format, mono and stereo, through its website, on an included DVD-ROM and via SD Cards offered in conjunction with Hal Leonard. That disc also features a version of Ableton Live Lite, a program that enables you to build your own loops for importing. Or plug your iPod into the back and jam along with your record collection. Or…

Visit a pro audio retailer and almost every studio monitor speaker you see will have amplification built in. But visit a high-end audio store and … END_OF_DOCUMENT_TOKEN_TO_BE_REPLACED

Unless you’re a certified guitar nerd, the name Ted McCarty (1909-2001) probably means nothing to you. But no matter who you are, there’s little doubt … END_OF_DOCUMENT_TOKEN_TO_BE_REPLACED

In audio as in jazz, some of the most interesting trends happen far outside the mainstream. Hop onto internet forums dedicated to headphones, and you’ll … END_OF_DOCUMENT_TOKEN_TO_BE_REPLACED

On April 18, 1972, the Roland Corporation was founded in Osaka, Japan. Its mission: to produce electronic instruments and accessories for musicians. Two years later, … END_OF_DOCUMENT_TOKEN_TO_BE_REPLACED