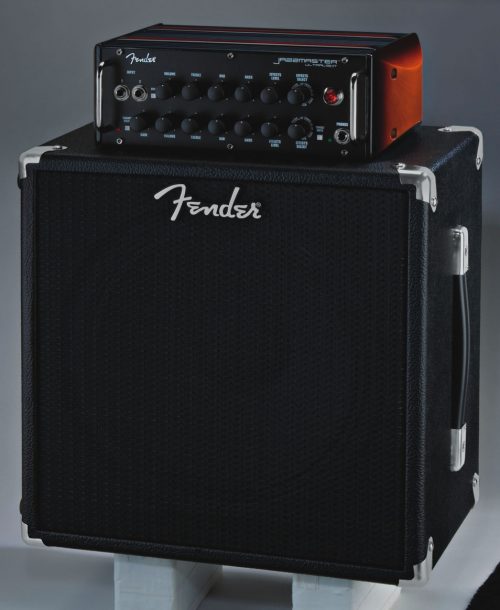 While Fender completely missed its target market when it launched the Jazzmaster guitar in 1958-aiming to replace the hollowbody but instead creating the ax of choice for surf guitarists and alt-rock hipsters-the company’s new Jazzmaster Ultralight amp will delight archtop junkies while providing the versatility that fusion heads demand.

It’s a surprisingly loud, great-sounding unit whose portability is one of its strongest selling points, and rightly so. Jazz happens, for the most part, in the cramped confines of urban areas, and unlike the brass and reed guys who can hop trains to gigs with their horns under their arms, guitarists usually pull up with a hatchback full of gear-especially in the case of contemporary players who utilize pedalboards full of effects. In other words, the next time you swear by your vintage Fender Twin, try lugging it down the stairs at the Village Vanguard.

With the 7.6-pound Jazzmaster Ultralight head unit and its 17-pound speaker enclosure, transportation is a nonissue. The head can be carried in its attractive embroidered gig bag, and the enclosure packs 250 electronic watt capabilities-whoa!-into one 12-inch speaker, meaning the amp weighs relatively little and won’t obliterate your lower back a few hundred gigs down the line.

That lightness is a credit to the JM Ultralight being a dependable, convenient-albeit stigmatized-solid-state unit. While serious blues and rock players are largely devoted to often temperamental tube amps, jazzers (especially archtop players) are a rare breed that plays solid-state amps. Although tubes offer warmth, sustain and overdrive that can’t be beat, jazzbos looking for a translucent clean sound that responds as rapidly as the key changes in “Giant Steps” will do just fine with this high-end solid-state amp.

While jazz-oriented amps are usually styled in a plain, polytone mold, the JM Ultralight and its enclosure form a downright sexy stack. The head unit’s sides and top boast sunburst-finished maple wood that’s similar to what’s used on Fender’s Showmaster guitar series. Obviously, some durability gets sacrificed with such aesthetic delights, but tough aluminum casing is layered beneath the maple to protect the electronics. The uberlight speaker enclosure is covered in Fender tolex, and four magnetic rivets fasten the head unit to the cabinet (part of Fender’s patent pending “hidden magnet system”). A Speakon cable connects the amp and speaker, which is a secure, high-quality method-but it’s also rare and limits use of the Ultralight with conventional cabs by not offering a regular stereo cable hookup. Of course, to attach the Ultralight to a cumbersome multispeaker stack would defeat the purpose of using these two weightless units together, and unless you’re gigging at Monterey, the Fender enclosure cranks out ample sound.

The Ultralight is split into two foot-switchable channels: one clean and one overdrive, with each channel offering a rotary of high-quality digital effects-16 settings on each channel. The clean channel boasts exquisite clarity and performed beautifully with both a solidbody and a hollowbody. Perhaps the best thing a jazz amp can do is sound nonexistent in clean situations, and the Ultralight did just that-it granted the hollowbody an airy, atmospheric tone that resembles how it would sound if you simply placed a fine microphone near the guitar’s f-holes.

While no one is going to mistake the gain channel’s distorted tones with those of a Marshall or even a Tube Screamer pedal, the Ultralight will provide players in blues and fusion settings with just enough overdrive crunch. Cranking the gain causes massive feedback even when used with a solidbody, but modest levels yield full, warm rock-oriented tones that lack the tinny quality of typical solid-state overdrive.

The effects are effortless to use and sound as good as-if not better than-other similarly integrated amp-and-effects units. The effects are selectable via a rotary knob and include reverb, chorus, flange, tremolo, vibratone, delay and various combinations of those core sounds. The intensity of the effect is controlled by the “Effects Level” knob, and you can surely waste away the afternoon trying to dial up your favorite jazz slinger’s tone. (I enjoyed cranking up the chorus and practicing my best Mike Stern licks or impersonating John Scofield and Charlie Hunter with the vibratone effect; a cool rotating speaker sound that resembles a Hammond B3.) One considerable gripe is the digital reverb, which can only be used in conjunction with delay and overdrive. Reverb is, obviously, more part of a sound’s foundation than merely an effect, and Fender would be wise to reconfigure an independent reverb control. The digital reverb included here also lacks the depth of Fender’s classic spring reverb (though the digital version is considerably less noisy).

Regardless, the Jazzmaster Ultralight boasts superb tone, controls and looks, in addition to being easier to carry than your ax. Guitarists should know the value of this convenience, and would be wise to invest in the unit at least for rehearsal purposes.

Visit a pro audio retailer and almost every studio monitor speaker you see will have amplification built in. But visit a high-end audio store and … END_OF_DOCUMENT_TOKEN_TO_BE_REPLACED

Unless you’re a certified guitar nerd, the name Ted McCarty (1909-2001) probably means nothing to you. But no matter who you are, there’s little doubt … END_OF_DOCUMENT_TOKEN_TO_BE_REPLACED

In audio as in jazz, some of the most interesting trends happen far outside the mainstream. Hop onto internet forums dedicated to headphones, and you’ll … END_OF_DOCUMENT_TOKEN_TO_BE_REPLACED

On April 18, 1972, the Roland Corporation was founded in Osaka, Japan. Its mission: to produce electronic instruments and accessories for musicians. Two years later, … END_OF_DOCUMENT_TOKEN_TO_BE_REPLACED