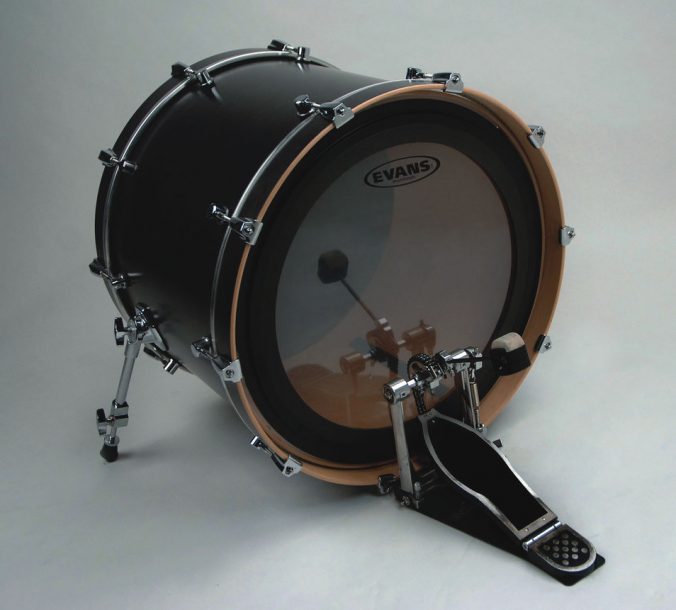 Evans’ EMAD 2 bass-drum head is a two-ply version of the original single-ply EMAD head, which is the world’s fastest-selling bass-drum batter head. If you aren’t familiar with these heads, EMAD is an acronym for Externally Mounted Adjustable Damping bass drum head. Perhaps they should call it the EMAD system, since this head is designed to offer several different muffling choices that can be easily applied to the surface of the head. So if you’ve ever stuffed a funky old pillow, shredded newspaper, Styrofoam peanuts or packing blankets in your bass drum, read on.

Affixed to the batter-head’s perimeter is a black plastic sleeve that holds either of two black-foam rings against the head. These rings come in two different thicknesses that offer different degrees of bass-drum muffling and alter the playing feel of the drum head. The head can also be used without the rings for a more open sound. But the main advantage of the rings is that you don’t have to remove the head to change your bass-drum sound.

The line now includes the EMAD Resonant head (developed in conjunction with drum designer Bob Gatzen). This will be of interest to owners of either EMAD head since it furthers your muffling options. This 7-mil black head has an internal muffling ring around its circumference and a small logo at the bottom, with a 5-inch microphone port placed at the 2 o’clock position that’s reinforced to prevent tearing. The head includes two foam rings that are used to muffle the resonant head. Imagine a foam doughnut with a slit cut around the outer edge. You insert the ring into the port by pulling open the slit and fitting the edges of the head into the slit, securing it in place. The foam rings come in two different densities of foam, to allow different degrees of muffling. The lighter-colored, softer and less dense ring works better with smaller drums and those that require less muffling. You have to take care when removing the foam ring to avoid tearing it (read the directions). If your drum is being miked, having a foam ring around the port will help protect it from tearing accidentally.

I was sent the 20-inch and 22-inch clear versions of the head, and I was eager to try them since I’ve had the original EMAD head since it came out. The first EMAD is a 10-mil-thick single-ply head and the EMAD 2 is a two-ply head with a 10-mil inner ply with a 6.5-mil-thick outer ply. Two-ply heads obviously offer a lot more durability than single-ply heads and also have a more attack with a warmer, enhanced low-end and a more muffled sound as a result of the two-plies dampening each other. One other feature of two-ply heads is that if you happen to break the outer head, you can probably still make it to the end of your gig without having to change heads. The heads included one of Evans’ bass-drum patches that you should place at the point of contact to help the head last even longer. If you play a double bass pedal, you’ll need to pick up a second patch, since it’s too small to accommodate two beaters.

In use, this head performed much like I thought it would. Without either ring in the tray, it was warm, with good attack, adequate low-end and some overtones. Many drummers might find that the head sounds fine just like this, without any extra muffling at all. Remember, the plastic tray muffles the tone all by itself. With the thinner ring inserted, I found another useful tone, with perhaps a bit more low-end and less ring. With the thicker ring, I thought the 20-inch drum had lots of low-end but was too muffled. The head felt a little deader, but that wasn’t a problem. With the thicker ring the 22-inch drum was also a bit dead for my taste, but in the studio I might be glad to have both rings with me. Playing live, I used the 22-inch drum with the thinner ring. The resonant head had the softer ring. From where I sat the drum sounded good, and I was told it sounded good through the PA.

While this head is available in 18-inch diameters, I don’t really think of it as a jazz-style head simply because I don’t usually use two-ply heads for jazz. I’m going to continue to use the heads on one of my all-purpose kits and will probably use it for dinner music. But if I were playing bebop I would choose a smaller bass drum and a more open sounding head. I think of the EMAD2 as more of a rock, funk or metal drum head.

Combined with the resonant head’s muffling options, this pair of heads offers nine different degrees of easily applied dampening. If you’re playing in the studio, or play different types of venues and want to be able to quickly and easily adjust your bass drum’s sound and liveliness, the original EMAD and EMAD2 heads offer a wide variety of options. These are versatile, good sounding and widely adjustable heads.

Visit a pro audio retailer and almost every studio monitor speaker you see will have amplification built in. But visit a high-end audio store and … END_OF_DOCUMENT_TOKEN_TO_BE_REPLACED

Unless you’re a certified guitar nerd, the name Ted McCarty (1909-2001) probably means nothing to you. But no matter who you are, there’s little doubt … END_OF_DOCUMENT_TOKEN_TO_BE_REPLACED

In audio as in jazz, some of the most interesting trends happen far outside the mainstream. Hop onto internet forums dedicated to headphones, and you’ll … END_OF_DOCUMENT_TOKEN_TO_BE_REPLACED

On April 18, 1972, the Roland Corporation was founded in Osaka, Japan. Its mission: to produce electronic instruments and accessories for musicians. Two years later, … END_OF_DOCUMENT_TOKEN_TO_BE_REPLACED