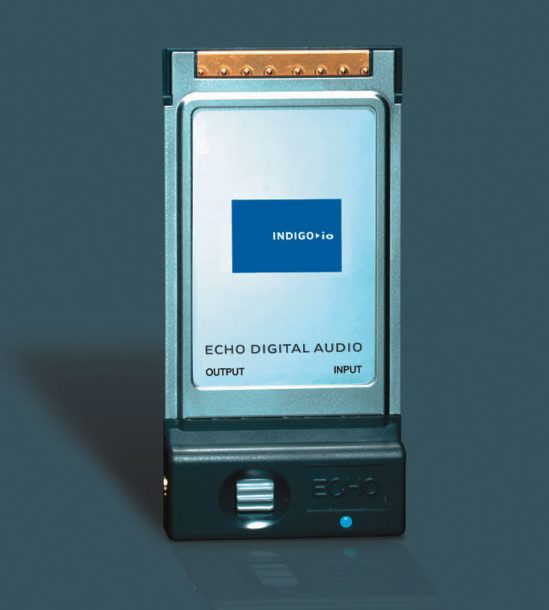 Even with inexpensive recording software it’s possible to produce professional-sounding tracks on a laptop. But built-in sound cards have lousy analog-to-digital converters, and musicians need better ways to plug in other than via a computer’s standard microphone or line input. Finding a solution isn’t hard these days, as a wealth of USB and FireWire breakout boxes have flooded the market.

The least expensive, easiest and most streamlined way I’ve found to integrate superior sound into a laptop comes via Echo’s Indigo IO, a card that slides into a laptop’s Type II Cardbus slot and allows for stereo input and stereo output via two 1/8-inch phono jacks. The Indigo supports 24-bit/96 kHz audio and full-duplex (two-channel in, two-channel out) operation, which means that you can play into the Indigo as you listen out of it, overdubbing until you are creatively bankrupt. The card has a frequency range of 10 Hz to 20 kHz and a dynamic range of >109 dB. Strange but great is an onscreen mixer included with the Indigo’s software that gives you eight virtual outputs, allowing you to mix eight channels from separate audio programs into one stereo output feed.

The Indigo worked exactly like a plug-n-play device should when I pushed it into my laptop’s card slot: the OS installed the driver (I use Windows XP, it’s also compatible with ME and 2000, plus Mac OS X, Jaguar and Panther) and its round power light glowed a soft blue indicating that it was ready for use. Without taking action to assign the Indigo to any buses, it worked immediately for input and output within Pro Tools, Logic and Sony Vegas. Chances are the Indigo experience will run smoothly from the get-go with any software platform, but I still recommend checking compatibility at Echoaudio.com before you make the purchase.

The Indigo greatly improves a laptop’s audio input, converting analog signals to digital audio without altering details or introducing noisy artifacts. Its one drawback is the 1/8-inch socket, which more often than not will require an adapter to accommodate a line coming out of a preamp or instrument. The Indigo also improves on a laptop’s playback, which tends to be flat and bereft of tingling highs and controlled low-end. This makes it a good investment even for folks who don’t create music but want to upgrade a laptop’s sound quality for listening to music or watching DVDs.

Visit a pro audio retailer and almost every studio monitor speaker you see will have amplification built in. But visit a high-end audio store and … END_OF_DOCUMENT_TOKEN_TO_BE_REPLACED

Unless you’re a certified guitar nerd, the name Ted McCarty (1909-2001) probably means nothing to you. But no matter who you are, there’s little doubt … END_OF_DOCUMENT_TOKEN_TO_BE_REPLACED

In audio as in jazz, some of the most interesting trends happen far outside the mainstream. Hop onto internet forums dedicated to headphones, and you’ll … END_OF_DOCUMENT_TOKEN_TO_BE_REPLACED

On April 18, 1972, the Roland Corporation was founded in Osaka, Japan. Its mission: to produce electronic instruments and accessories for musicians. Two years later, … END_OF_DOCUMENT_TOKEN_TO_BE_REPLACED