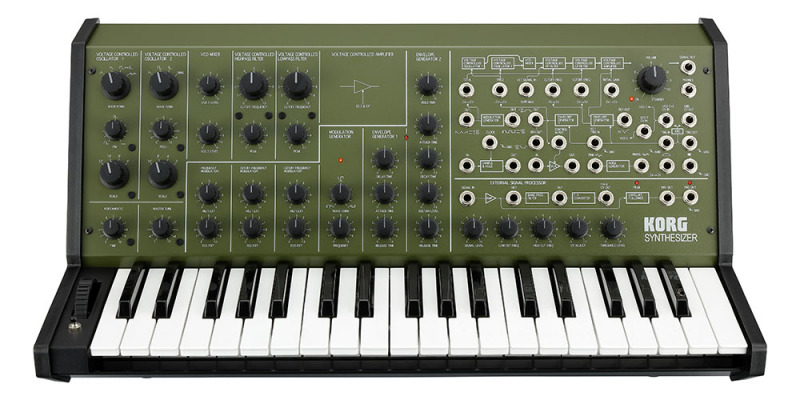 The Korg MS-20 FS is a full-scale reissue of the MS-20, a 37-key monophonic synthesizer that the company originally introduced in 1978, and which for the past several years was only available in kit form. Although this updated edition adds such newfangled features as a USB connection and a MIDI in, the analog circuitry inside and the patch-bay system out front remain the same. So does the powder-coated finish, in four limited-edition colors: green (shown), white, blue, and black.

Visit a pro audio retailer and almost every studio monitor speaker you see will have amplification built in. But visit a high-end audio store and … END_OF_DOCUMENT_TOKEN_TO_BE_REPLACED

Unless you’re a certified guitar nerd, the name Ted McCarty (1909-2001) probably means nothing to you. But no matter who you are, there’s little doubt … END_OF_DOCUMENT_TOKEN_TO_BE_REPLACED

In audio as in jazz, some of the most interesting trends happen far outside the mainstream. Hop onto internet forums dedicated to headphones, and you’ll … END_OF_DOCUMENT_TOKEN_TO_BE_REPLACED

On April 18, 1972, the Roland Corporation was founded in Osaka, Japan. Its mission: to produce electronic instruments and accessories for musicians. Two years later, … END_OF_DOCUMENT_TOKEN_TO_BE_REPLACED