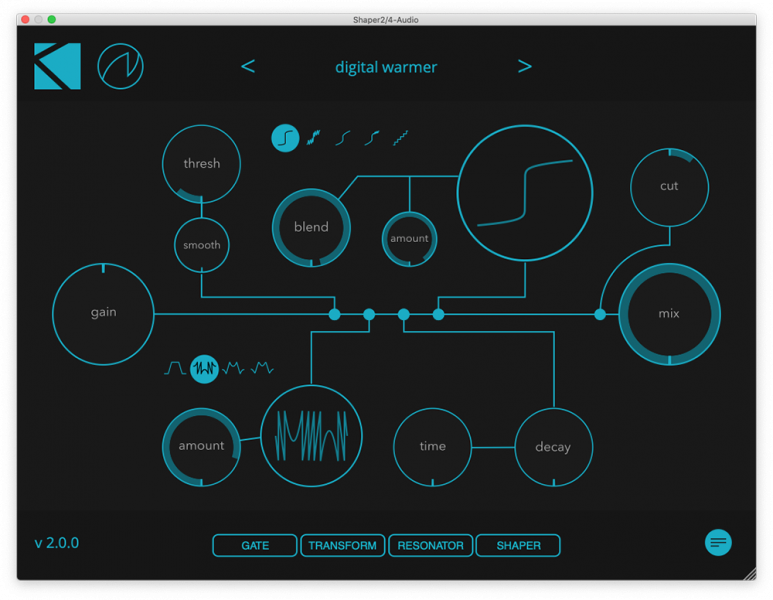 The developers at K-Devices clearly had fun working on their Shaper 2 plugin processor, compatible with any 64-bit DAW in Mac or Windows. You can tell just by the names of the app’s four main modules, and of the functions within them: Glitch Gate, Waveshaper (with Muffin, Multistress, Cracker, S&M, and Bits&Samps functions), Transform (with Clip, Wrap, Fold, and sFold functions), and Resonator/Short Delay. In the company’s own words, Shaper 2 allows users “to redefine—or totally destroy—any flavor of the sound source.”

Visit a pro audio retailer and almost every studio monitor speaker you see will have amplification built in. But visit a high-end audio store and … END_OF_DOCUMENT_TOKEN_TO_BE_REPLACED

Unless you’re a certified guitar nerd, the name Ted McCarty (1909-2001) probably means nothing to you. But no matter who you are, there’s little doubt … END_OF_DOCUMENT_TOKEN_TO_BE_REPLACED

In audio as in jazz, some of the most interesting trends happen far outside the mainstream. Hop onto internet forums dedicated to headphones, and you’ll … END_OF_DOCUMENT_TOKEN_TO_BE_REPLACED

On April 18, 1972, the Roland Corporation was founded in Osaka, Japan. Its mission: to produce electronic instruments and accessories for musicians. Two years later, … END_OF_DOCUMENT_TOKEN_TO_BE_REPLACED