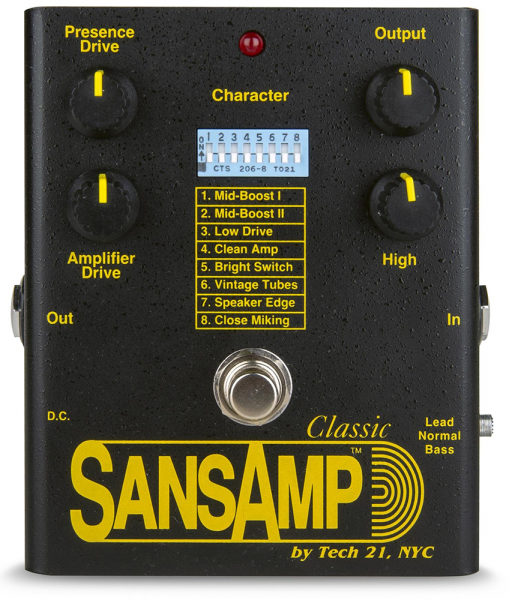 Back in the 1990s, Tech 21’s SansAmp DI pedal quickly became the go-to box for electric guitarists and bassists who wanted good tone without an amplifier. Over the decades, the company branched out into other product lines, and five years ago the original SansAmp was discontinued. But now it’s back as the SansAmp Classic. The analog circuitry remains the same, allowing you to select from among eight preamp/power-amp “character” settings, which are in turn adjustable with four front-panel knobs.

Vinyl enthusiasts love to brag that last year, the dollar volume of record sales surpassed that of CDs for the first time since the 1980s. … END_OF_DOCUMENT_TOKEN_TO_BE_REPLACED

These days, if you’ve got the right apps, you can recreate the sound of just about any instrument on earth. In the early 1970s, when … END_OF_DOCUMENT_TOKEN_TO_BE_REPLACED

It was the peak of the Roaring Twenties, and a great time to sell saxophones. More than a million of the instruments were already in … END_OF_DOCUMENT_TOKEN_TO_BE_REPLACED

Back in the 1960s, tone controls were considered a must-have feature for audio gear. But in 1974, their reputation sank when famed audio entrepreneur Mark … END_OF_DOCUMENT_TOKEN_TO_BE_REPLACED