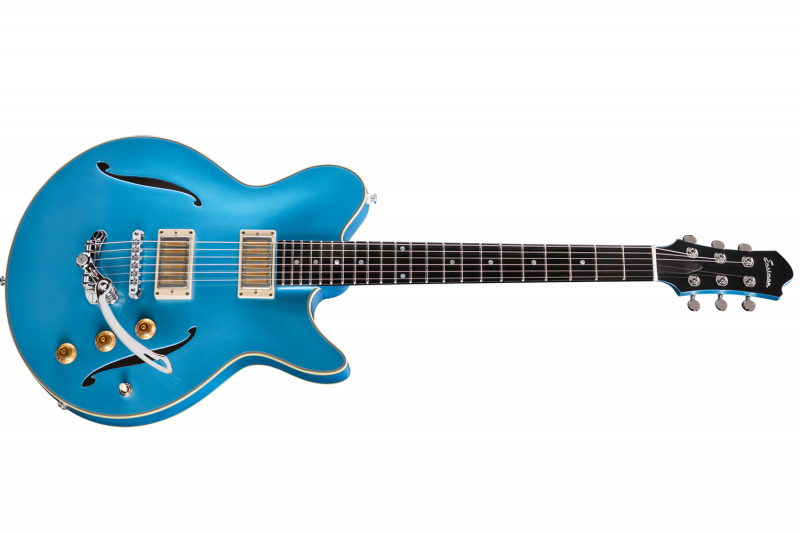 Inspired by the Los Angeles skyline (or so the press release says), the semi-hollow Eastman Romeo LA electric guitar certainly makes a good first impression. It sports a striking Celestine Blue finish, along with three gold knobs that control its pickup duo of Seymour Duncan Radiator Gold Foil P-90s. The top is spruce laminate, the back and sides mahogany laminate, the neck maple with a swept-curve joint, and the nickel-plated vibrato tailpiece is by the German craftsmen at Göldo.

Vinyl enthusiasts love to brag that last year, the dollar volume of record sales surpassed that of CDs for the first time since the 1980s. … END_OF_DOCUMENT_TOKEN_TO_BE_REPLACED

These days, if you’ve got the right apps, you can recreate the sound of just about any instrument on earth. In the early 1970s, when … END_OF_DOCUMENT_TOKEN_TO_BE_REPLACED

It was the peak of the Roaring Twenties, and a great time to sell saxophones. More than a million of the instruments were already in … END_OF_DOCUMENT_TOKEN_TO_BE_REPLACED

Back in the 1960s, tone controls were considered a must-have feature for audio gear. But in 1974, their reputation sank when famed audio entrepreneur Mark … END_OF_DOCUMENT_TOKEN_TO_BE_REPLACED