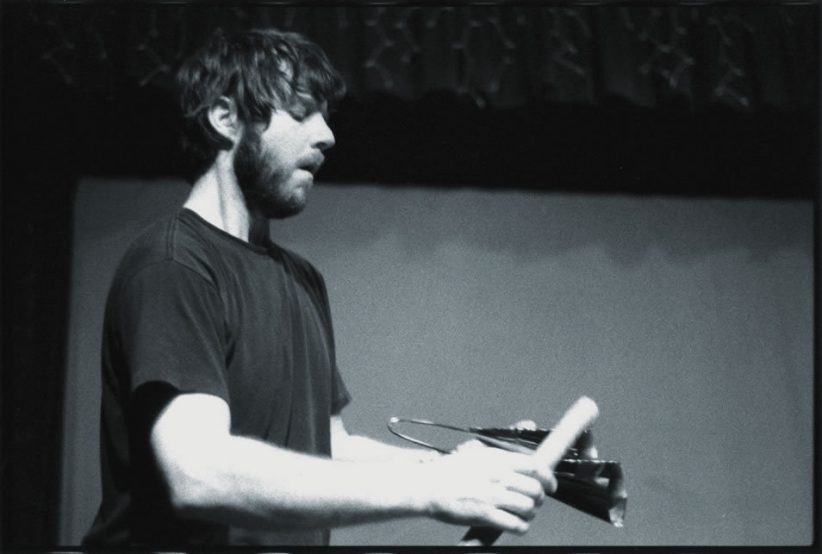 Many instructional drumming projects offer standard practice methods and rudiments with all the zest and artfulness of a lab manual. But when drummers as creative and versatile as Billy Martin (of Medeski, Martin & Wood) and Stanton Moore (Galactic) put out product, things get interesting.

Martin’s new DVD, Life on Drums (Vongole), is a 90-minute film with an additional hour-long bonus disc, and starts off in a way more cinematic fashion than most instructional videos. In an opening shot that evokes a vintage art film, the camera leads the viewer through several dark rooms, accompanied by the drummer’s eerie string-quartet composition “Corridor Strangu,” and eventually finds the director and New York City native soloing on his minimalist drum kit. “We filmed at an abandoned radio station in northern New Jersey,” Martin says, “with wood paneling that’s probably from the ’70s. And even though I didn’t have a time period in mind, I like that era of cinematography, with its saturation of colors.”

Martin then saturates viewers with an array of concepts and performances. Most discussion comes through candid conversations with Allen Herman, a veteran drummer of Broadway shows like A Chorus Line and Dancin’. He was also Martin’s first instructor, starting out with the 47-year-old drummer when Martin was 11. As Martin explains, Allen had just started playing again after working a corporate job for the past 15 years, but his enthusiasm for the project was palpable. “I asked Allen to be involved, and he was all in,” Martin says. “I had my topics lined up, and he just responded to them.”

Their first topic is “Soloing,” and the pair’s basic philosophy here requires the drummer to view his or her kit as an orchestral whole. (Later mention of Anthony J. Cirone’s Portraits in Rhythm book, a mid-’60s series of classical pieces applied only to the snare drum, illustrates that point.) In the segment entitled “Time,” Herman mentions that terms like “accelerando” and “retard” existed in classical music long before the advent of drum-machine perfection. Martin explains how accelerating and retarding tempo enhances the music of non-Western cultures, and plays solo tributes to Max Roach (“Max Moon”) and Bob Moses (“Rahboat Strut”).

There’s also a piece called “Dragon Whirlygig Stridulation,” performed by Martin’s students in the Fang Percussion Ensemble and dedicated to Paul Price, a classical mallet instructor to both Herman and Martin. Other highlights, such as when Martin discusses the importance of samba instructor Manoel Montiero and conga teacher Frankie Malabe, cover Latin styles. A bonus-disc map on clave details how those rhythms traveled from Central Africa to South America, the Caribbean and the United States.

If Martin’s 2 1/2-hour program is comprehensive, Moore’s Groove Alchemy (Hudson) is a staggeringly in-depth book, MP3 and DVD combination that the drummer even parlayed into his latest CD. The DVD alone is 3 1/2 hours long, as is the MP3 play-along disc, which can be used to accompany more than 600 notated exercises in the 150-page book. Add in the 60-minute CD and you have seven hours of material. “I was either working on the project, or it was at the back of my mind, for about five years,” Moore says. “It’s by far the most work I’ve ever put into anything, and I don’t know of any other instructional packages with this much in them. But I set out to try to do something that hadn’t been done before.” While Martin takes a worldly approach befitting his amoebic playing, Moore’s style is rooted in New Orleans, where the 38-year-old drummer was born and resides. He studied rudimental, drum corps and classical percussion there with Marty Hurley, Johnny Vidacovich and Jim Atwood.

Those lessons pay off in Groove Alchemy, which traces funk drumming back to James Brown’s influential drummers Jabo Starks (“Sex Machine,” “Super Bad”) and Clyde Stubblefield (“Say It Loud-I’m Black and I’m Proud,” “I Got the Feelin'”), plus Zigaboo Modeliste of the Meters (“Cissy Strut,” “Fire on the Bayou”). “James personified rhythm,” Moore says. “He was obsessed with finding the baddest cats who could help him do that, and he went out to clubs and found Jabo and Clyde. Zig listened to a lot of traditional New Orleans music, plus drummer Earl Palmer, who played on hits by Fats Domino and Little Richard.”

Moore’s trio, with keyboardist Robert Walter and guitarist Will Bernard, recorded the tracks used on both the CD and DVD at Levon Helm’s studio in Woodstock, N.Y. Yet the film’s focus is on education, not performance; the trio doesn’t play its first tune, “Pie-Eyed Manc,” until nearly an hour in. “We recorded the CD to show how we’d come up with some new funk-based grooves,” says the drummer, “but we also wanted to document the making of [those grooves].”

Beforehand, Moore traces elements of the innovations of Starks and Stubblefield back to preceding drummers with Brown, including Nat Kendrick, Clayton Fillyau and Melvin Parker. Moore even points out that Brown helped innovate the groove himself-by displacing the backbeat, a future funk staple-while playing drums on his 1962 tune “Limbo Jimbo.” Later, he narrates and plays through a “History of the Backbeat” timeline, and unearths comparisons between Modeliste and Led Zeppelin’s John Bonham.

The book’s notations are numbered and therefore easy to follow along with Moore’s exhaustive 603 MP3 sound samples, which range from illustrations of Starks’ sense of swing and Stubblefield’s snare-drum innovations to demonstrations of Modeliste’s two-handed hi-hat approach. Bonus features include slow-motion segments that simplify things, particularly Stubblefield’s tricky grace notes and accents on the snare drum. “If you’re a drummer, you’re probably interested in funk at least a little bit,” Moore says. “And a lot of drummers today are very interested in it, especially if they’re playing any kind of popular music. Lots of hip-hop grooves are based on what Clyde, Jabo and Zig created.

“So the book alone is a great deal of information and pretty intensive,” continues Moore, “and even though I probably could’ve gotten away with leaving some of the 600 playing samples out of the play-along disc, I decided to play every one of ’em. People have documented the history of funk, but I wanted to connect the dots and document where some of its innovations actually came from.”

The unabashedly funky, live-in-the-studio Groove Alchemy CD surprises by sounding like anything but the result of the methodical exercises that inspired it. Further proof that, on both educational and funk levels, Moore knows how to break it down.

Visit a pro audio retailer and almost every studio monitor speaker you see will have amplification built in. But visit a high-end audio store and … END_OF_DOCUMENT_TOKEN_TO_BE_REPLACED

Unless you’re a certified guitar nerd, the name Ted McCarty (1909-2001) probably means nothing to you. But no matter who you are, there’s little doubt … END_OF_DOCUMENT_TOKEN_TO_BE_REPLACED

In audio as in jazz, some of the most interesting trends happen far outside the mainstream. Hop onto internet forums dedicated to headphones, and you’ll … END_OF_DOCUMENT_TOKEN_TO_BE_REPLACED

On April 18, 1972, the Roland Corporation was founded in Osaka, Japan. Its mission: to produce electronic instruments and accessories for musicians. Two years later, … END_OF_DOCUMENT_TOKEN_TO_BE_REPLACED