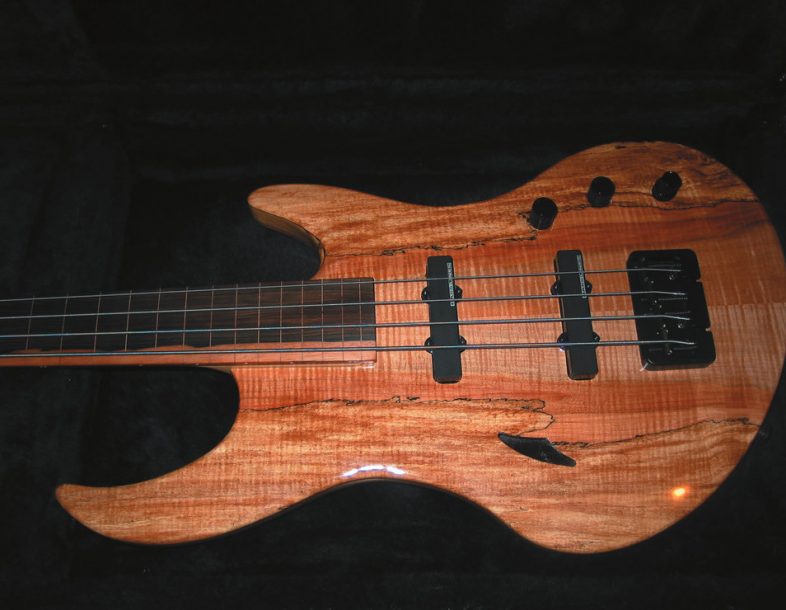 It takes a very special kind of imagination to reexamine accepted paradigms of instrument design and to come up with enhancements and improvements that aren’t merely cosmetic but represent a totality of artistic innovation and musical craftsmanship-with the potential to change the way in which we think about the instrument itself.

Our contemporary consciousness of the fretless bass essentially derives from the exhilarating musical insights of the late Jaco Pastorius, but some 30-plus years down the line this instrument has tended to lag behind its fretted brethren in terms of design refinements. And so along comes luthier Brian Bowdren-a thoughtful, inquisitive musical thinker-with some fresh insights into how to craft a truly perfected vision of this expressive instrument.

What’s the big whoop? Well, with apologies to Linda Richman, this bass does indeed play like buttah. Bowdren’s B.Bo ButterBass is a total slam-dunk, one of the most gloriously involving, ergonomically balanced bass guitars I’ve ever played. Beginning with the Fender Jazz bass and the Guild Pilot bass as a template, Bowdren has fashioned a delightfully light, comfortable instrument that is easy to wear and play, with truly exceptional intonation, a big, full, sweetly rounded sound and a vivid dynamic presence.

These qualities can be traced to Bowdren’s decision to employ butternut, a close relative of walnut, as the primary tone wood in his chambered, semiacoustic body, which is capped by an exquisite arrangement of flame-maple with contrasting wings of burled, spalted maple. “Butternut is substantially lighter in both color and weight than walnut,” Bowdren told me. “Most important, it has amazing resonance. Because of the linear strength of the wood and its porous nature, it transfers vibrations very nicely. The sound of butternut, on its own, is very warm and airy-rich with overtones.”

Which is why this perfectly balanced instrument weighs in at only seven pounds. There is a kidney-shaped acoustic chamber in the lower bout, a corresponding electronics cavity in the back and a cat’s-eye sound hole at the center of the upper bout, which combine to lend a touch of acoustic delicacy and harmonic complexity to the amplified sound. The contour of the body, with its radiused top, deep cutaway horns and substantially reduced headstock serve to enhance both balance and the natural ease of access and playability all the way up the two-octave neck, marked with 24 fret lines. The neck itself is a relatively slender, beautifully contoured three-piece maple design with a fingerboard and nut of Macassar ebony. It is a testament both to Bowdren’s artistry and his fundamental humanity that he takes what many luthiers might offhandedly reject as a decisive imperfection in the wood, and deploys that tell-tale stripe of sapwood running down its side to echo the color of the spalted maple face and highlight a stretch of notes on the low E string from the ninth fret on up.

Bowdren then employs a very broad, four-bolt neck-joint pocket, which he further extends halfway down the body with a special rock-maple backbone that adds to the snappy, instantaneous quality of the instrument’s attack, as does a 13-degree headstock angle, which provides additional down-pressure on the nut for improved articulation in all registers. “I am very focused on the angle of the after-length of the string, from the bridge saddle to the anchor point, to determine its impact, not on string tension, but on string excursion and intonation of the partials.” That greatly enhances comfort and playability all along the fretboard, for exceptional string-to-string articulation, even with a fairly low action. “Over time I’ve found that a 32 1/2-inch scale offers me the optimum balance between comfort/intonation and string tension/responsiveness on a fretless instrument.”

Hands down, the ButterBass offers the greatest ease of execution and intonation, the clearest, most focused articulation of any fretless I’ve yet encountered-it is just uncommonly easy to play in tune. Nor is there too much grease and flour in the gravy, because the J-bass styled electronics by Steve Bailey and Kevin Beller (Seymour Duncan’s design engineer) are thankfully free of wooly colorations or any sort of bloomy frequency exaggerations, serving simply to accentuate the instrument’s sweet acoustic timbres. Still, for added punch, a pull-switch on the volume knob offers a touch of instant Jaco, a subtle midrange boost that really brings the growl and vibrato effects front and center.

At only $2,455, Bowdren’s B.Bo ButterBass proved not only to be a blissfully functional design and a terrific value in hand-craftsmanship but an exquisite work of art as well. Even as I was contemplating this breakthrough instrument’s uncommon playability and potential to expand the outreach of the fretless bass guitar, I was floored to hear that Brian Bowdren recently died in his sleep, all of 50 years old.

This instrument stands as a living testament to Bowdren’s spirit of exploration and originality.

Visit a pro audio retailer and almost every studio monitor speaker you see will have amplification built in. But visit a high-end audio store and … END_OF_DOCUMENT_TOKEN_TO_BE_REPLACED

Unless you’re a certified guitar nerd, the name Ted McCarty (1909-2001) probably means nothing to you. But no matter who you are, there’s little doubt … END_OF_DOCUMENT_TOKEN_TO_BE_REPLACED

In audio as in jazz, some of the most interesting trends happen far outside the mainstream. Hop onto internet forums dedicated to headphones, and you’ll … END_OF_DOCUMENT_TOKEN_TO_BE_REPLACED

On April 18, 1972, the Roland Corporation was founded in Osaka, Japan. Its mission: to produce electronic instruments and accessories for musicians. Two years later, … END_OF_DOCUMENT_TOKEN_TO_BE_REPLACED