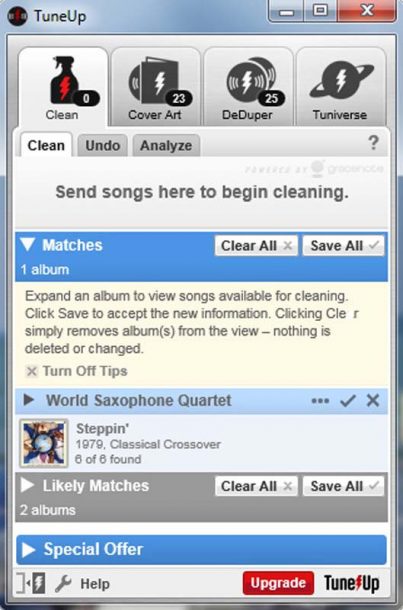 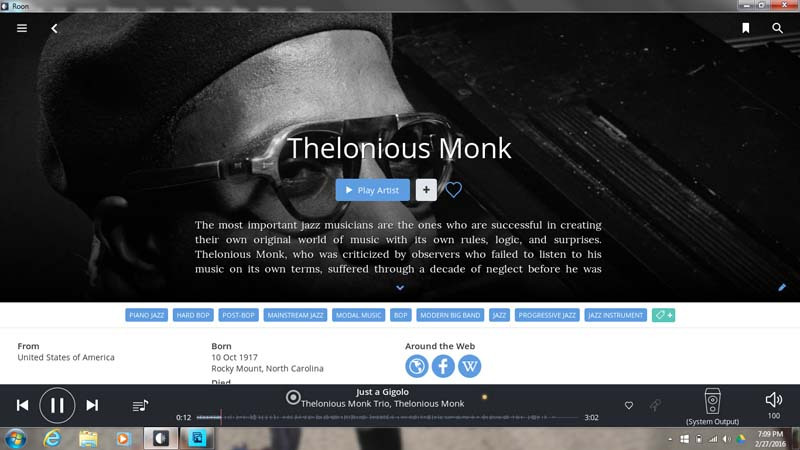 Wonderful as it is to have our music collections stored on computers, phones and tablets, actually getting to that music can be quite an annoying task. On my smartphone, if I list the music by artist, Astrud Gilberto and Walter Wanderley’s A Certain Smile, A Certain Sadness is broken up into three albums: nine tunes under Gilberto’s name, one under Wanderley’s and one under the Walter Wanderley Trio. It gets worse: Grant Geissman’s Cool Man Cool is divided into no fewer than eight albums, each with a different list of players. The track listings are correct for the Dave Liebman Group’s Turnaround: The Music of Ornette Coleman, but there’s no cover art-and it’s listed not under “D” or “L” but under “T,” for “the.”

The problem is that digital music playback software gets its information (or metadata) from various online databases, most of which employ information entered by end users like you and me. In other words there’s little standardization, the accuracy is questionable, the information is incomplete and the misspellings are sometimes embarrassing. Although conventional media playback software such as iTunes and Windows Media Player lets you edit the data, it’s a lot of work.

Several brands have tried to address this problem, but the field has captured fresh attention thanks to Roon Labs, a new company that by most accounts seems to be getting everything right.

Although Roon launched only about a year ago, it has already become something of a benchmark. Numerous reviews have praised the design of its software, and at last count 18 audio electronics manufacturers had signed on to build Roon Ready network music streamers.

Roon does everything you wish iTunes or Windows Media Player could. It’s a music player app that runs on a Mac or PC, linked with an online database that serves up richer metadata than any other music player software I’ve seen. It can also link with Tidal, the subscription-based streaming service, so that all the music on Tidal appears alongside your collection. (It doesn’t, however, link with the much more popular and comprehensive Spotify.)

Like other media players, Roon scans the hard drives of computers connected to your home network to find your music files so it can display and play them. Unlike those other players, Roon seems to get all the album and track titles right, with artwork, and digs up information on the artists and albums in your collection. For most artists and albums, Roon presents an essay by a professional music writer that includes links to associated artists. Predictably, the more popular the work the more attention it gets; for example, Roon goes deep into Miles’ On the Corner but has not one word to say about David Binney’s Lifted Land.

We’re getting now to the thing people really like about Roon: It puts you back in touch with your music collection and inspires you to find more works by players you might not be familiar with. It’s sort of like Wikipedia: You’re reading about an album while you listen to it, and you notice it features a bass player you hadn’t heard of; you click on his name, seek out other albums he played on, perhaps play a few tunes off those, and the exploration goes on and on. I especially like the Discover feature, which randomly presents players and albums and tells you a little more about them. That’s how I found out about Red Holloway, a saxophonist I’d never heard of but who happens to appear on three albums I own.

Roon’s tied to your computer, although you can download apps that will let you control Roon through a tablet computer or smartphone. The downside is the high cost-$119 per year or $495 for a lifetime subscription. However, Roon is free for the first 14 days if you want to try before you buy, and Roon Ready audio hardware may include discounts on the service.

For a Few Dollars Less

While nothing I’ve seen matches the involving experience of Roon, there are many other programs that help you organize and clean up your digital music collection, all at a much lower cost and available in trial versions. One I particularly like is called TuneUp, an app available for Mac or Windows that costs $39.95 per year or $49.95 for the lifetime version. (TuneUpMedia.com sometimes offers promo codes with generous discounts.) Another nice option is Wide Angle Software’s Tune Sweeper, which runs $24.99.

I prefer TuneUp because it’s tidy and intuitive. On PCs it opens alongside Windows Media Player, and all you have to do to fix incorrect metadata is drag the files into a window in the TuneUp app. The software presents you with the albums it thinks the tunes are from. Click to confirm the tunes’ identities and they’re instantly updated. The app will also fetch missing cover art for any album.

Nobody needs this software; after all, the music you’re listening to will be the same. But finding your music will be easier, you’ll have fewer tunes lost in the “Unknown Artists” folder, and instead of staring at a generic icon, you’ll be able to enjoy all that great art Reid Miles designed for Blue Note.

You’ve got to give the folks at the National Association of Music Merchants (NAMM) some credit; they tried. As the COVID-19 pandemic continued to rage … END_OF_DOCUMENT_TOKEN_TO_BE_REPLACED

We travel (for pleasure, at least) to leave our world behind for a while. Still, bringing along the things we love most is often a … END_OF_DOCUMENT_TOKEN_TO_BE_REPLACED

Visit a pro audio retailer and almost every studio monitor speaker you see will have amplification built in. But visit a high-end audio store and … END_OF_DOCUMENT_TOKEN_TO_BE_REPLACED

Unless you’re a certified guitar nerd, the name Ted McCarty (1909-2001) probably means nothing to you. But no matter who you are, there’s little doubt … END_OF_DOCUMENT_TOKEN_TO_BE_REPLACED