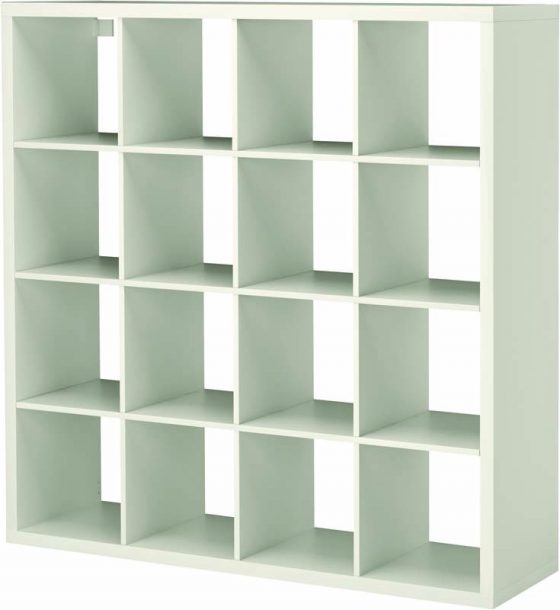 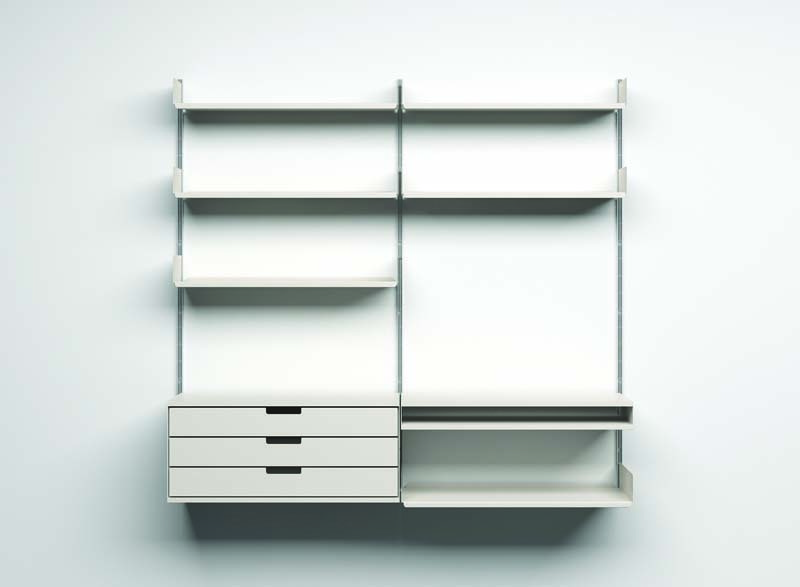 The 606 Universal Shelving System by Vitsoe 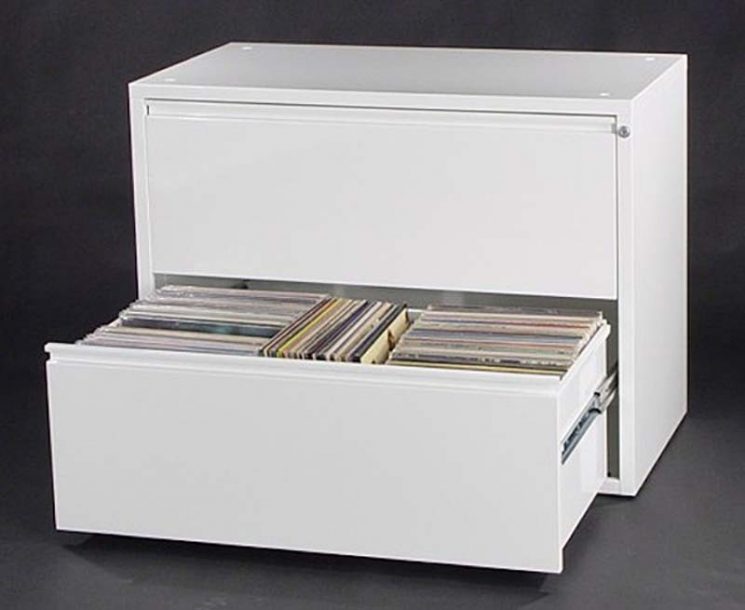 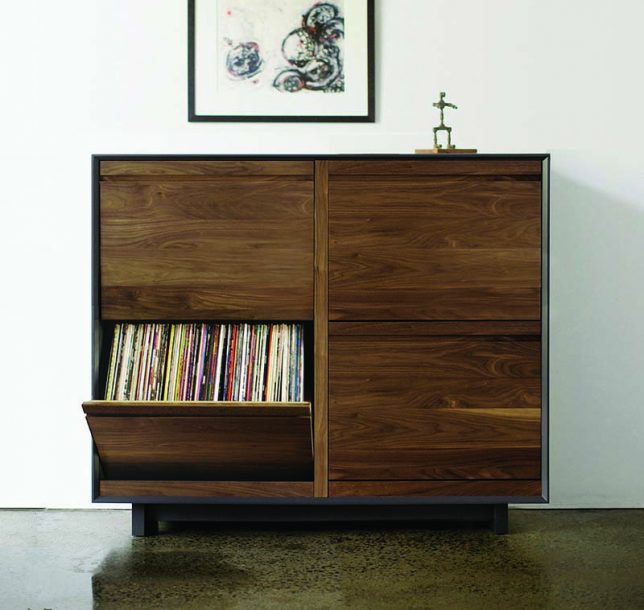 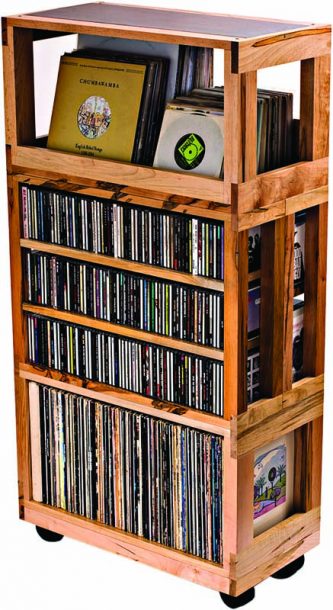 An interlocking record-shelf system by Mapleshade

Convenient as Internet downloads and streaming can be, many of us still rely heavily on traditional physical media-CDs and vinyl-for most of our music listening. For anyone with a large music collection that’s probably not going to change, because it’s so much trouble to copy all that music onto a computer, and sound quality usually suffers in the process. (And who wants to part with precious artwork and liner notes?) That means we still need ways to store all those discs.

Unfortunately it’s getting tougher to find proper storage units. Consumer-electronics industry manufacturers and dealers focus on accommodating the most popular listening trends, and these days that means music sourced from a phone, tablet or computer. Enter an electronics store in search of CD storage solutions, and you’re likely to encounter a limited and depressing array of flimsy, tacky products that look like they’ve been sitting on the shelf since before Joey Alexander was born.

But while the Internet has taken some things away from us, it’s also given some back, and there are numerous companies that sell beautiful, functional music storage products through their own websites.

What Do You Need?

Anyone who’s been listening to jazz for a while probably has music in a few physical formats-certainly CDs, maybe vinyl records, and probably some DVDs and Blu-rays, too. Some jazz fans might even need space for reel-to-reel and cassette tapes, both of which are experiencing a minor renaissance among audio enthusiasts. You might also want to accommodate accessories such as remote controls, record and CD cleaning products, and tools for adjusting a turntable cartridge.

Most media storage devices are designed to keep records and CDs standing straight up. This is important with records because it helps prevent warping. CDs aren’t particularly heavy when stored in their jewel cases, but if you’re storing records, the racks need to be strong. Three standard 12-inch records in their sleeves weigh about 1.3 pounds, so a bundle of 300 weighs about 130 pounds.

You will have to decide whether you want to conceal the discs or keep them in the open for easy access. Some audiophiles prefer to keep their media racks in a state of mild chaos, with some shelves full and some partly empty, because a messy media rack can help break up sound reflections and prevent “flutter echo,” the rapid, annoying bouncing of sound back and forth between parallel walls.

Play It Your Way

Large jazz collections are often best served by modular storage systems that can be combined to suit the user’s needs-perhaps space for thousands of CDs and a couple hundred vinyl records, or vice versa. One of the nicest such systems I’ve seen comes from Mapleshade, a company that sells audiophile records and accessories. Its system lets you mix and match storage modules for whatever media you own. The coolest option is the Flip-Thru Shelf, which lets you store records facing forward, so you can flip through them as you would in a record store. Prices vary depending on finish and which and how many modules you choose; a basic system that holds 177 CDs, 100 Blu-rays and more than 300 records runs $645 in finished oak.

If you prefer to keep your sides concealed, Can-Am offers a discreet but similarly flexible option-file-cabinet-style modules that can be stacked and combined with equipment racks. A two-drawer module that holds 540 CDs, 240 DVDs or 300 Blu-rays runs $475; a module that holds 560 LPs runs $650. The styling of these rugged units appears rather industrial, but with 18 different stock colors available, it’s easy to lighten up the look.

The sleekest solution I’ve seen comes from Vits?”, whose Euro-style, minimalist systems let you combine shelves and drawers in wall-mount or freestanding configurations, so you can accommodate discs of all types as well as electronic equipment. The company will custom-spec a system for you if you send it photos of your space. A six-shelf system holding 372 CDs or 258 DVDs runs $912.

If your taste in furniture is as elevated as your taste in music, check out SYMBOL audio, whose products recall the beauty and style of Danish Modern furniture from the Kind of Blue era. Symbol’s custom-configurable racks accommodate LPs, CDs, DVDs and audio gear in whatever combination you need. The coolest feature is a tilt-out LP drawer that lets you view the spines of all your records from above, so you don’t need to kneel down or use a flashlight to browse your sides. A basic cabinet that holds 240 LPs runs $3,545.

Of course, some jazz lovers would rather spend their money on records or audio equipment than on media storage. Record collectors looking for stylish but affordable storage often rely on Ikea’s Kallax shelving unit. Each cubbyhole in the Kallax is 13 1/4 inches high, just right for LPs. The Kallax units aren’t sturdy enough to be filled completely with LPs, but the $149, 16-cubbyhole model lets you store about 300 records on the bottom level and fill the other levels with CDs, DVDs, Blu-rays and knick-knacks. If your goal is to clean up the mess but keep the focus on the music, it’s a great way to go.

Visit a pro audio retailer and almost every studio monitor speaker you see will have amplification built in. But visit a high-end audio store and … END_OF_DOCUMENT_TOKEN_TO_BE_REPLACED

Unless you’re a certified guitar nerd, the name Ted McCarty (1909-2001) probably means nothing to you. But no matter who you are, there’s little doubt … END_OF_DOCUMENT_TOKEN_TO_BE_REPLACED

In audio as in jazz, some of the most interesting trends happen far outside the mainstream. Hop onto internet forums dedicated to headphones, and you’ll … END_OF_DOCUMENT_TOKEN_TO_BE_REPLACED

On April 18, 1972, the Roland Corporation was founded in Osaka, Japan. Its mission: to produce electronic instruments and accessories for musicians. Two years later, … END_OF_DOCUMENT_TOKEN_TO_BE_REPLACED