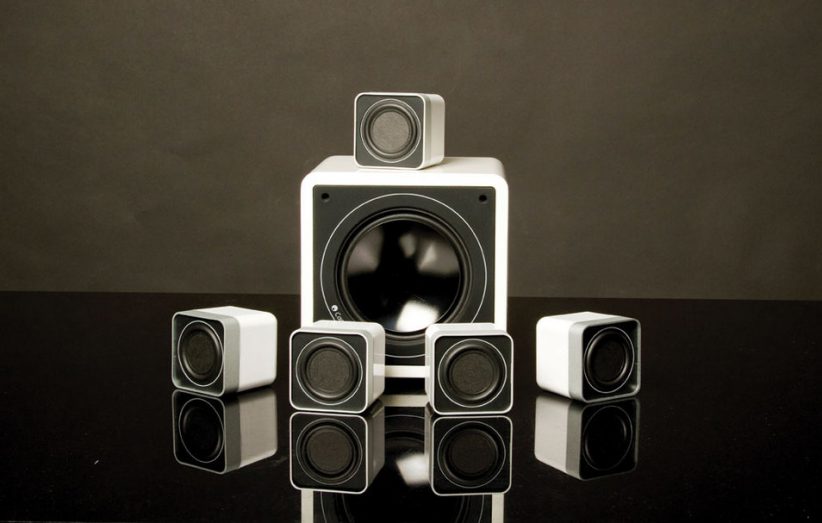 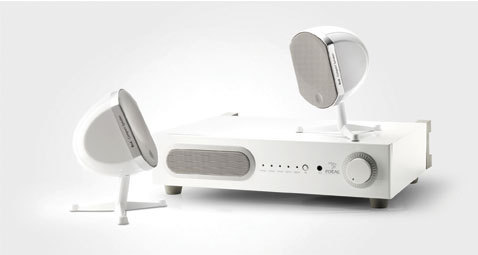 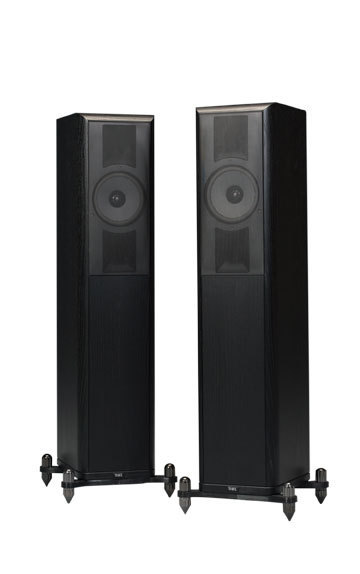 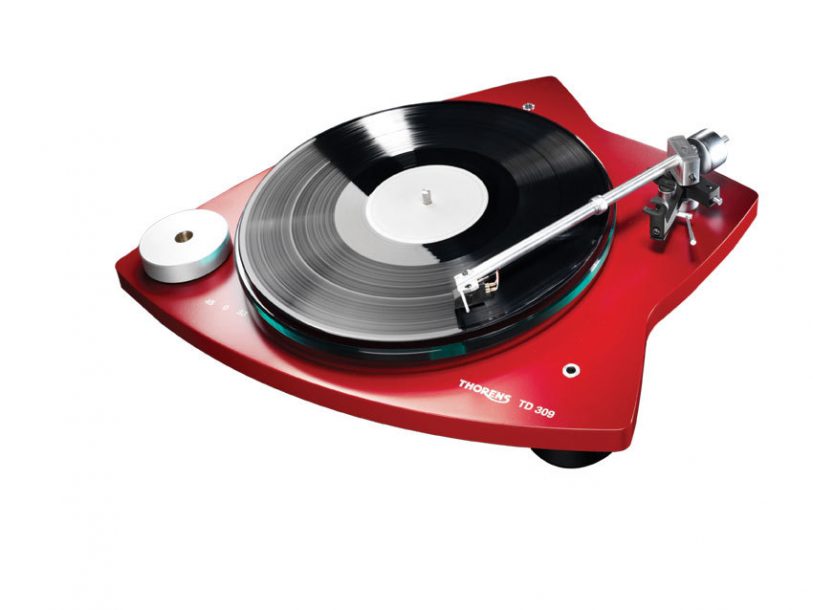 Every year for more than a decade, TVs have upstaged audio at the Consumer Electronics Show. But at the 2011 show in January, while the flat-screen sets on display at the Las Vegas Convention Center were eliciting mostly yawns, the excitement was palpable in the audio exhibits over at the Venetian Hotel. Rooms were packed with everything from cutting-edge high-tech products to classic hardware that wouldn’t have looked out of place in Wes Montgomery’s living room.

Surprisingly, this year’s audio innovations were mostly in products made for music listening; I speculate that the dearth of excitement in TV has dampened the interest in home theater and surround sound. For jazz fans, obviously, this is great news. Whether you’re looking for a good set of $30 in-ear headphones or a showpiece $300,000 stereo system, CES had plenty to offer.

You might think that by now speakers would be as perfected as the piano. But year after year, they get keep getting better-and often smaller, too.

One of the tiniest and most innovative systems I saw at CES was the Cambridge Audio Minx. The $549 Minx includes a couple of tiny cube-shaped speakers and a powered subwoofer barely bigger than a grapefruit. I’ve encountered systems this small before, but few, if any, that can pump out the power of the Minx. The cube-shaped speakers use a new Balanced Mode Radiator driver that blends traditional technology with recent innovations in flat-panel speaker design.

The Focal Bird is a bit bulkier than the Minx but more accomplished. Its slim base unit combines a subwoofer, amplifiers, a preamp and a digital-to-analog converter. The base connects to two small satellite speakers. You can stream music to the Bird from an iPhone or iPad (or connect a more traditional audio source) and enjoy clean, dynamic sound from a system that practically disappears into your decor. The Bird runs $899 to $1,299 depending on which of the three different satellite speakers you choose.

Many audiophiles prefer the sound of small speakers, some of which can deliver dazzling stereo images. CES saw the introduction of many new minis, including models ranging from the low three figures to the high four figures. Boston Acoustics has resurrected and completely updated its famed A-series minispeaker line, starting with the $300-per-pair A25. PSB demonstrated the Imagine Mini, a $700-per-pair speaker that put out solid bass despite its tiny 4.5-inch woofer. Monitor Audio’s new Gold GX 50 minispeaker wowed me with deep bass and a huge sonic image from its ribbon tweeter. And the $5,995-per-pair Fire, part of Totem Acoustics’ new Element Series, portrayed the powerful, thumb-slapping style of bassist Dean Peer as if the bass amp were right in the room with me. Not bad for a speaker that’s less than 17 inches high.

Last year Monster caught the notice of jazz fans with the Miles Davis Tribute, a set of earbuds dedicated to the Prince of Darkness. While critics dubbed the Tribute worthy of Miles’ moniker, its $499 price put it out of reach for most listeners. The new $349 Miles Davis Trumpet may win a wider audience. While it’s tough to prove Monster’s claim that the Trumpet is the “world’s smallest headphone,” it’s surely the only one whose body is modeled after a trumpet mouthpiece. A remastered CD of Sketches of Spain is included in the package.

Those who combine jogging and jazz will be thrilled to learn of the Skullcandy Fix, $70 earbuds designed to fit securely but comfortably in your ears so they won’t fall out when the going gets rough. The company proved the Fix’s firm fit by showing the earbuds hanging from a thin bar with a bottle of bourbon suspended at the other end of the cable.

The worst thing about earbuds is that the cables tend to tangle into a mess that looks like a Jackson Pollock painting. Vizio’s $35 VHE2011K earbuds solve this problem by using flat cables. Bunch ’em up in your hand, let ’em go, and they straighten themselves out almost instantly.

Red seems to be all the rage in high-end audio these days. Even the dyed-in-the-wool traditionalists at Swiss turntable manufacturer Thorens have come out with a visually flashy new model swathed in a brilliant red finish. The TD 309’s rakish design arises from its Tri-Balance construction, which isolates the record player from vibrations. The $1,699 turntable includes a heavy glass platter and a Thorens TD 92 tonearm. Feel you might have to rule out the TD 309 because of its flashy looks? Well, you needn’t-it’s also available in gloss black.

Cayin, a company known for relatively inexpensive tube amplifiers, daubed healthy dollops of red onto a great-looking new minisystem. The Awesome Spark MM-1 combines two bright red two-way speakers with a tiny red-trimmed tube amplifier that puts out about 10 watts per channel. A built-in FM tuner, a USB input and an analog input give you plenty of entertainment options. Tweak Studio, Cayin’s new U.S. distributor, estimates the MM-1 will retail for “well under $500.”

Perhaps the most advanced new high-end audio electronics at CES wore the logo of Devialet, a new French company. In a single sleek enclosure, Devialet’s D-Premier combines a preamp, a digital-to-analog converter, music streaming circuitry and a 240-watt-per-channel power amp that uses a unique hybrid analog/digital technology for efficient operation. The main unit can hang on a wall, while a unique remote provides the user interface. Connected to a pair of Focal Utopia Scala speakers and playing a Bobby McFerrin cut, the $15,995 D-Premier delivered some of the most accurate and convincing portrayal of vocals and piano I’ve ever heard.

Dan D’Agostino, for decades the chief engineer of high-end amp company Krell Industries, showed the first product ever released under his own name: the Momentum amplifier. The Momentum puts out 300 watts per channel from an amazingly compact chassis, thanks to unique copper heat sinks that use venturis for cooling instead of fins. The design is said to consume less power at idle than a cell phone charger. A front power meter inspired by the look of luxury watches graces the amp’s face. The Momentum is a mono amplifier; for stereo, you’ll need a pair (and $42,000).

Perhaps my favorite new piece of audio electronics at CES was the McIntosh C50 preamp, which combines a traditional analog preamp with a digital input section that can play music files through a USB input. The best feature on the $6,500 C50 is its eight-band equalizer, which lets you fine-tune the sound in seconds. Asked why McIntosh was bringing back this feature, which hasn’t been seen on a high-end audio product in decades, company rep Ron Cornelius replied, “Our customers tend to have huge software collections, and inevitably some of it won’t be good-sounding.” Seems like the perfect sonic prescription for my eclectic record collection-and probably a good bet for any JT reader.

Every CES brings a new generation of superspeakers, the beautifully crafted, state-of-the-art creations which few of us can afford but of which we can all at least dream. Hearing audiophiles rave about the latest Magico speakers is becoming a CES tradition. This year’s magical new Magico was the Q3, a $34,000-per-pair tower speaker that boasts an intricately constructed metal cabinet, a unique and elegant design, and some of the best sound anywhere. Hearing a snippet of “Blue Rondo à la Turk” through the Q3, I doubted that even Dave Brubeck himself had ever heard his music portrayed with such depth and veracity.

Thiel’s SCS4 bookshelf speaker has earned a stellar reputation among audiophiles for its coherent, natural sound-but not for its robustness. Thus, the company stretched the SCS4 into the new SCS4T, a tower speaker whose larger enclosure gives the woofer more bass response and a more dynamic sound. I’m not sure what cut Thiel was playing when I walked in, but I do know the SCS4T’s portrayal of the anonymous jazz combo sounded incredibly spacious and room-filling. At $3,690 per pair, you can’t say the SCS4T is cheap, but you could say it’s a great bargain.

I expected the Apple iPad to dominate the audio offerings at CES. Perhaps my prognostication was premature, but given how many audio manufacturers told me something to the effect of “That thing’s gonna take over our industry,” I bet my prediction comes true soon enough.

That said, there were a few new iPad-oriented audio products. Cambridge Audio’s $279 iD100 docks an iPad, iPhone or iPod, and is able to extract a clean digital audio signal from any of them. It even includes a variety of digital outputs plus various video outputs. Wadia’s $599 171i Transport, the latest version of the iPod dock most beloved of audiophiles, also offers iPad connectivity, but it doesn’t dock the iPad-it uses a cable and a separate stand to accommodate the larger device.

For just $199, you can score the new iHome iA100, a clock radio that docks an iPad, iPhone or iPod touch. With an iPad docked on top, the iA100 becomes a multimedia entertainment system. It’s just the thing for checking out that awesome YouTube clip of Rahsaan Roland Kirk playing “I Say a Little Prayer”-and, dare I say, a far more enriching experience than watching yet another superhero-inspired blockbuster on the 3D TVs and fancy phones that the CNN reporters get so excited about.

Visit a pro audio retailer and almost every studio monitor speaker you see will have amplification built in. But visit a high-end audio store and … END_OF_DOCUMENT_TOKEN_TO_BE_REPLACED

Unless you’re a certified guitar nerd, the name Ted McCarty (1909-2001) probably means nothing to you. But no matter who you are, there’s little doubt … END_OF_DOCUMENT_TOKEN_TO_BE_REPLACED

In audio as in jazz, some of the most interesting trends happen far outside the mainstream. Hop onto internet forums dedicated to headphones, and you’ll … END_OF_DOCUMENT_TOKEN_TO_BE_REPLACED

On April 18, 1972, the Roland Corporation was founded in Osaka, Japan. Its mission: to produce electronic instruments and accessories for musicians. Two years later, … END_OF_DOCUMENT_TOKEN_TO_BE_REPLACED