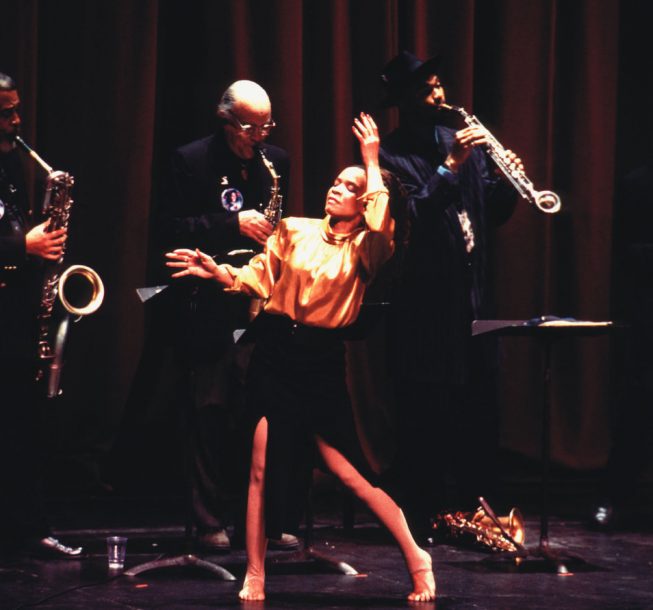 Without David Murray, the World Saxophone Quartet isn’t quite the same. However, when James Carter (pictured) sits in for the otherwise engaged tenor saxophonist, one can expect an equal amount of energy and unhinged excitement in the music. And that’s exactly what occurred when a cross-generational lineup of the Quartet took over a narrow street on Pittsburgh’s North Side.

The group’s appearance made up one part (or two, if their sets are counted separately) of an event presented by City of Asylum/Pittsburgh, a grassroots nonprofit that provides a sanctuary to literary writers exiled under the threat of death, imprisonment or persecution in their native countries. For two years, they select a writer and provide him or her with a house, living stipend and medical benefits, allowing the writer to continue working while transitioning to a permanent exile.

The current and emeritus writers-in-residence, as well as four other poets, made up the rest of the evening’s bill, in a four-section performance that found the writers collaborating at various times with individual Quartet members as well as with local drummer Roger Humphries. As if the performance wasn’t enough, the setting added to the unique quality of the evening. Sampsonia Way, an alleyway that houses the installation gallery the Mattress Factory, was blocked off on either end to provide space for a stage and numerous folding chairs. A video screen projected behind the performers added a trippy effect to the night, expanding the view for those sitting at a distance, and unnerving anyone who noticed the time delay between the sound and image.

Humphries, probably best known beyond city limits for his appearance on Horace Silver’s Song for My Father, revealed a more impressionistic, pensive side as he accompanied readings by Rita Mockus, Kavery Nambisan and Horacio Castellanos Moya. A short time later, James Carter and baritone saxophonist Hamiet Bluiett emitted some high shrieks before launching into the Quartet’s theme “Hattie Wall.” As their riff kicked in, alto saxophonist Oliver Lake made his way through the crowd along with Greg Osby, who filled the other alto seat created by the late Julius Hemphill and subsequently filled by Arthur Blythe, Bruce Williams and Jaleel Shaw. Seeing all four onstage offered an interesting contrast: two relatively younger but established musicians, dressed nattily in suits, next to two elder statesmen dressed in the casual shirts and slacks.

Their first set wasted no time in proving that this lineup could continue in the innovative tradition of the WSQ and energize a crowd. A reading of “Giant Steps” began in an almost baroque fashion, which all four voicing the harmonic progression in crisp manner. Then they created their own sheets of sound, with each saxophonist blowing a solo at once. “Come Sunday” maintained its reverential mood but managed to allow plenty of room for Carter’s spastic shrieks and bobbing gestures, which, as mentioned, were out of sync with the camera work projected behind him.

The group’s first set lasted barely 30 minutes before giving way to part three. Pairing Lake, Osby, Carter and Bluiett up with different poets for brief duets was an interesting idea, although brevity sometimes worked against them. But the biggest head scratch occurred when State Senator Jim Ferlo read “Victor Jara,” Adrian Mitchell’s lyrics about the Chilean singer that were sung by Arlo Guthrie, with accompaniment from the whole World Saxophone Quartet. The good senator is a friend to the arts community and the politics of the evening, granted. But he should either come up with his own prose or, better yet, stick with his own brand of pontificating without involving the help of musicians who are light years ahead of him. Lake, who appeared at last year’s City of Asylum/Pittsburgh event, joined the act by reading some of his prose, including the sarcastic, biting “Spy on Me Blues,” which appeared last year on the WSQ’s Political Blues album.

While recent recordings have included a rhythm section with the band, this evening’s back-to-basics approach resulted in moments when Bluiett and Carter acted as a rhythm section, touching on pure funk. At another moment, what started out sounding like a spiritual transformed into Jimi Hendrix’s “Little Wing,” which allowed them to really go to town. In the second set, Osby’s probing solo style really clicked with the group as well.

These days Pittsburgh has a limited number of jazz venues, which means that many well-established bands like the World Saxophone Quartet don’t make it to town very often. In fact, they haven’t been here since 1991. City of Asylum/Pittsburgh’s event, which was free to the public, made two noble gestures, supporting international poetry and bringing serious jazz to a city that’s hungry for it.

“It’s time to imagine a place where we can come together,” Danilo Pérez said from the hallowed stage of Washington, D.C.’s historic Sixth & I … END_OF_DOCUMENT_TOKEN_TO_BE_REPLACED

At the Zeiders American Dream Theater in Virginia Beach, Va., between April 8 and 10, the Vocal Jazz Summit convened in person for the first … END_OF_DOCUMENT_TOKEN_TO_BE_REPLACED

The Big Ears Festival returned to Knoxville in a big way in late March, drawing an estimated 30,000 music enthusiasts from across the U.S. and … END_OF_DOCUMENT_TOKEN_TO_BE_REPLACED

Let’s get this out of the way: The Savannah Music Festival is not a jazz festival. Held over the course of 17 days in late … END_OF_DOCUMENT_TOKEN_TO_BE_REPLACED