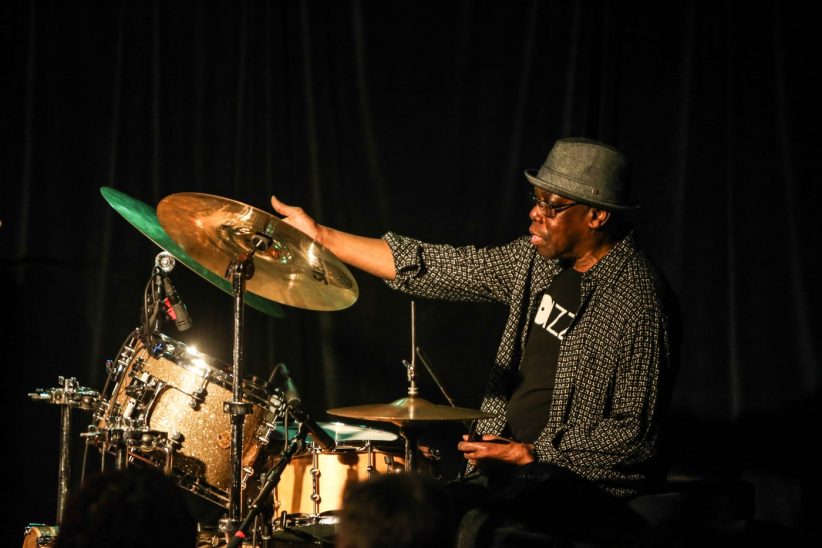 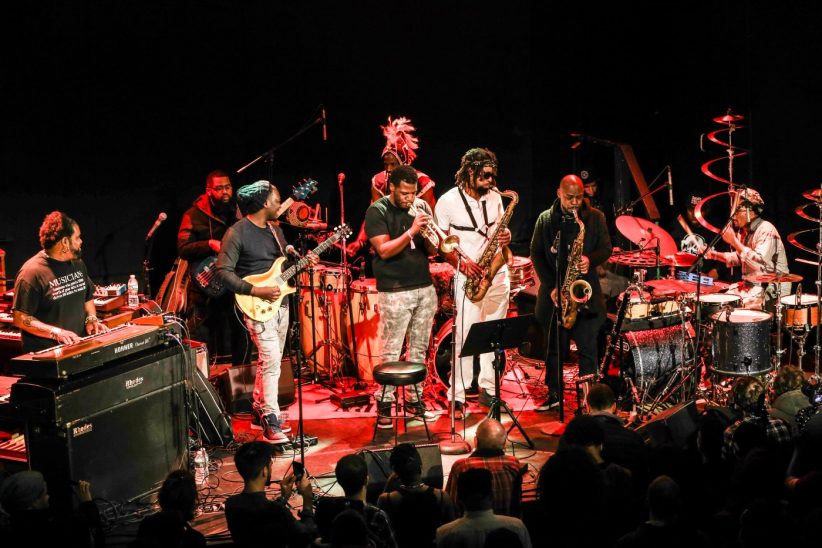 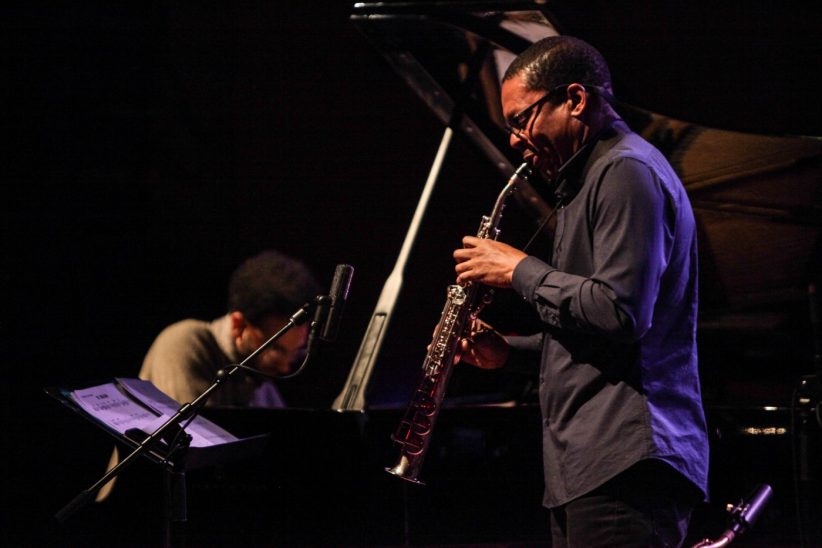 Will 2017 go down as a banner year in the history of Winter Jazzfest? The annual festival, which held its 13th edition Jan. 5 through 10, primarily at venues in Lower Manhattan, has enjoyed steady and consistent improvement throughout its run. But this round felt bigger, better, more important. By upping its offerings and introducing a couple of well-timed themes, WJF increased its sprawl and its focus at once.

The festival’s main event, its two-night “marathon” on Jan. 6 and 7, occupied such a swath of New York that the culture and rituals around it seemed fundamentally changed. In past years you could run circles through a concentrated pocket of the West Village, catching 15 or 20 minutes of different sets until your knees buckled. This year, the marathon took the shape of a series of club crawls rather than one—an ecosystem of hangs—and to hop from gig to gig meant more travel time and less music (especially on Jan. 7, when a snowstorm did little to diminish a robust turnout). You could easily have ping-ponged between venues in the West Village, or the East Village, or owned by the New School, whose fine-sounding rooms have been a welcome addition, particularly for fans bothered by crowds. If you hold an allegiance to a specific undercurrent or scene in today’s jazz world—New York’s fervent hot-jazz movement, or jazz with a lean into hip-hop, R&B and DJ culture—there was a dedicated room for you too.

Then there were the single-night shows, among them a sold-out opening-night club date featuring two saxophonists, Pharoah Sanders and British newcomer Shabaka Hutchings (see p. 14), possibly the most buzzed-about artist in WJF history and one whose hype feels like a direct result of Kamasi Washington’s success. Complemented by a loose celebration of Monk’s centennial, jazz as a tool for social justice was the festival’s pertinent and unimpeachable narrative. Brilliantly, this hook was explored from a variety of dispositions and vantages. The drummer Ulysses Owens Jr. led his band and singers including Theo Bleckmann and Alicia Olatuja through “Songs of Freedom,” a gorgeously arranged, emotively swinging tribute to the culture-shifting work of Abbey Lincoln, Joni Mitchell and Nina Simone. Closing the fest four nights later was Charlie Haden’s Liberation Music Orchestra, granted even more soulful durability via guest Geri Allen, who performed in pianist/leader Carla Bley’s stead. The set boasted the band’s well-tested material—“Not in Our Name,” “This Is Not America,” “Amazing Grace,” “America the Beautiful”—given renewed poignancy through sheer context.

Drummer and 2017 artist-in-residence Andrew Cyrille provided several of the fest’s peaks, and his performances came off more like the work of a midcareer stalwart than the victory lap of a revered jazz veteran. Cyrille’s duo set with saxophonist Bill McHenry was a smartly paced recital by two musicians with great economy of motion and melody. On standouts like “Drum Song for Leadbelly,” where McHenry’s fusillades of notes contributed mightily to the rhythmic rapport, Cyrille showcased his mastery of the trap set’s interior, using the toms and rims to achieve the dynamically simmering pulse of a fine hand drummer. A similarly Afrocentric attack helped define the bluesy, noir-tinged Caribbean funk of his Haitian Fascination.

Cyrille was also a strong presence in the festival’s grandest homage to Monk, an improv show in which various, mostly chamberlike configurations from a pool of 12 musicians performed the LP Solo Monk. The results proved how dramatically and thrillingly adaptable Monk music (and standards) can be, especially in the hands of expert personnel. Each rotation became a bold new aesthetic filter for a beloved tune, the wide-open ideal you’d hope for in a tribute to jazz piano’s most vital influence. Cellist Erik Friedlander, violinist Charles Burnham and bassist Trevor Dunn turned “Dinah” into shellac-era string-band art. Guitarist Marc Ribot served a reminder of his gifts as a chord-melody soloist with “I Surrender, Dear.” More than once Kris Davis proved her lyrically striking jazz-piano bona fides, an angle of her talents often obscured by her reputation in advanced composition.

In the end, however, special events couldn’t supersede the extravagant versatility of the marathon. Not to say everything met expectations. Drummer Chris Dave’s Drumhedz, chock-full of excellent players, took the elastic, jammy bent of an all-star contemporary R&B unit into idleness; stretches of the set felt like watching a rehearsal. But trumpeter Adam O’Farrill’s Stranger Days was working at the peak of its powers, mixing and matching grooves and strategies in a way that provoked continual surprise while also reflecting absolute control. And a nightlong program of ECM-related artists at the New School beckoned you to stay out of the cold. Saxophonist Ravi Coltrane and pianist David Virelles entered into a serious communion, as did bassist Thomas Morgan and guitarist Bill Frisell, whose harmonic command and unending stream of ideas were unmistakable. The guitarist Jakob Bro, in the Stateside premiere of his trio with Morgan and drummer Joey Baron, dug into one facet of Frisell’s skillset—cinematic, atmospheric, folklike melody. The melancholy turned harder toward set’s end, and became violently cathartic during a spellbinding drum solo, the sort of moment that inspires the feeling of catching your balance after missing that last step. To be sure, there were similar moments happening simultaneously all across town.

Among the many physical, spiritual, and institutional losses related to the still-ongoing pandemic is that of Los Angeles’ renowned Playboy Jazz Festival (PJF) at the … END_OF_DOCUMENT_TOKEN_TO_BE_REPLACED

It’s difficult to imagine what the stage and the audience would have looked like at Gaillard Center in Charleston, South Carolina, if Rhiannon Giddens’ new … END_OF_DOCUMENT_TOKEN_TO_BE_REPLACED

“It’s time to imagine a place where we can come together,” Danilo Pérez said from the hallowed stage of Washington, D.C.’s historic Sixth & I … END_OF_DOCUMENT_TOKEN_TO_BE_REPLACED

At the Zeiders American Dream Theater in Virginia Beach, Va., between April 8 and 10, the Vocal Jazz Summit convened in person for the first … END_OF_DOCUMENT_TOKEN_TO_BE_REPLACED