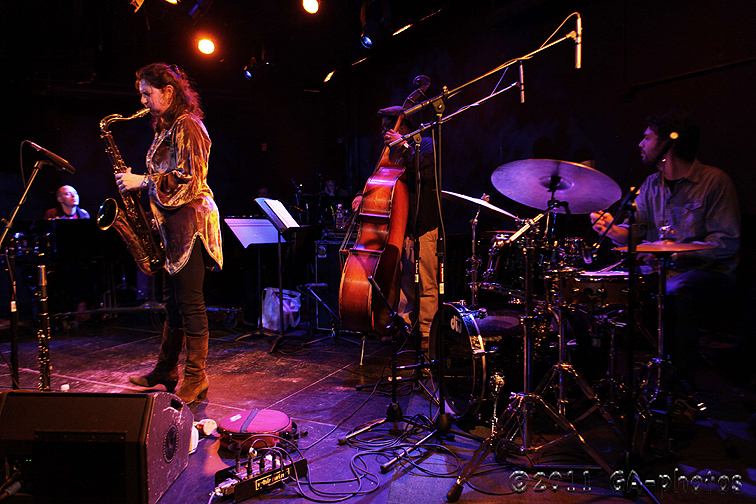 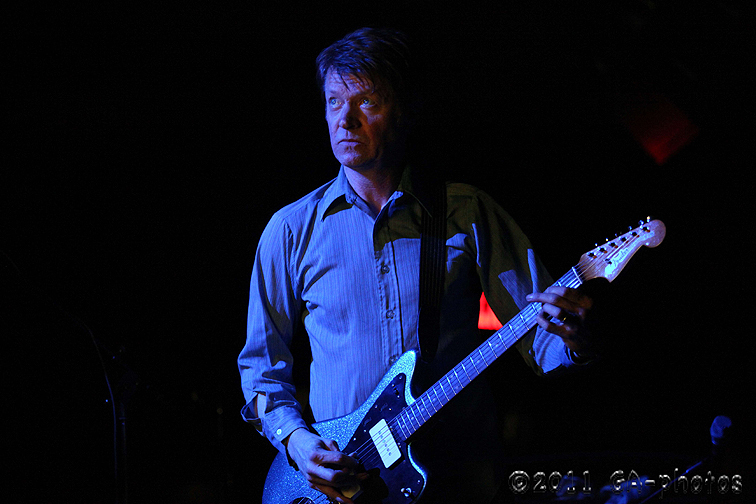 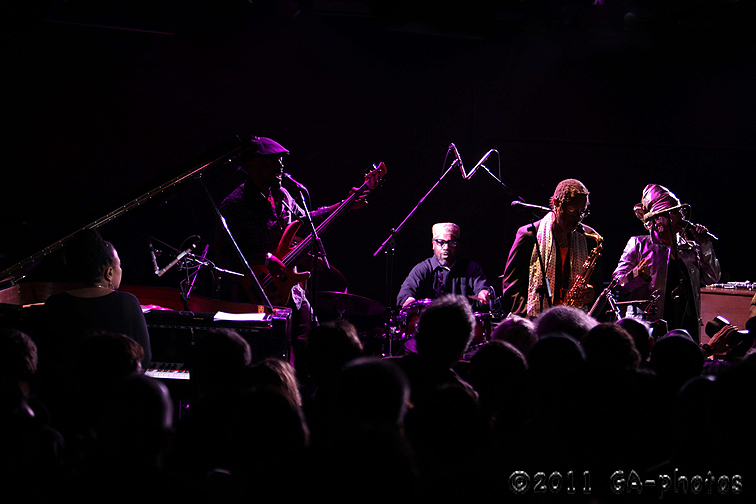 Winter Jazzfest, part festival and part industry showcase for the Association of Performing Arts Presenters, has since 2005 effectively and impressively fought jazz’s good fight. It’s proved that there is serious and enduring interest in the music from all angles: performance, presentation and appreciation. But at the 2011 edition, which took place this past weekend at five clubs in New York City’s West Village, the interest was so plentiful that it was, at times, downright painful. Festival organizers have written that they “processed around 4000 bodies” throughout the weekend, and that’s the right kind of rhetoric; some of the venues felt like giant masses of wool-long coats, scarves and caps squeezing in and out of clubs as if exiting the concourses at a European football match.

And that’s if you could get inside. Venues often reached capacity, leaving long lines for tedious games of one-in/one-out. (Friday night was especially problematic, as the fest was condensed to only two venues after Chico Hamilton’s 9:15 set at Le Poisson Rouge.) The scene also obscured the music at times, with an overwhelming din of boozy conversation during many sets. This kind of disinterest was strange to witness, especially at performances that usually inspire cultlike focus-e.g., Charles Gayle’s maelstrom of fire music and freebop. In all, it seemed to send a message to fans and struggling industry folks: Be careful what you wish for. If jazz stops being a secret, will it be as much fun?

Of course it will. (Remember, the most solvent art and entertainment got that way by welcoming casual interest.) Yes, there was much to be cynical about, but if you could shift your weight through the crowds or stick around until the wee hours, there was also plenty to celebrate. With its balance of eclecticism, aesthetic focus and artistic credibility, Jazzfest’s programming was, once again, a grand achievement. To put it another way, the event was free of fluff and corn and overt pop concessions, but accommodating of the expanding way we define jazz and improvised music. Even if the drummers weren’t dropping bombs and spang-a-langing, all of these acts were working in one legitimate tradition or another.

But if you had to choose a dominant vibe, it would have been cutting-edge postbop, in all its rhythmically stuttering, harmonically knotty glory. One of that music’s architects, Steve Coleman, performed with Five Elements at Le Poisson Rouge, which was the de facto mainstage. But Kenny’s Castaways was the clubhouse for jazz 2.0, and also the prime musician hang. Highlights there included Chris Lightcap’s Bigmouth, which closed its terrific set with the leader’s rousing, Ornette-ish “Celebratorial,” and Donny McCaslin’s set, during which he and drummer Mark Guiliana performed an Interstellar Space-esque sparring match mid-tune.

Much of what went down felt slightly more uptown, or at least less willful in its attempts to test jazz’s parameters. Don Byron, on tenor, clarinet and backing vocals, took jazz-minded improv to spiritual music with his New Gospel Quintet, featuring special guest Geri Allen, who can play the blues as affectingly and as convincingly as any jazz pianist this side of Cyrus Chestnut. (Byron’s drummer, Pheeroan akLaff, demonstrated that he can play within boundaries as effectively as he can break them.) Anat Cohen’s quartet with Jason Lindner on piano utilized almost danceable grooves, summoning up Masada and your favorite Impulse! LPs. Shimrit Shoshan would have been a find for whatever is left of jazz’s star-making machinery: Beautiful but legit, the young pianist led a thoroughly modern trio with confidence despite its imposing personnel (John Hébert, Eric McPherson). Her playing, which felt daring but leaned on the modern mainstream-Herbie, Chick, Mulgrew Miller, Fred Hersch-showed a similar focus and collectedness.

Jazz guitar was at its most postmodern throughout the weekend. Guitarist Nels Cline and visual artist Norton Wisdom worked in a Downtown milieu with Stained Radiance, where Cline crafted soundscapes while Wisdom painted onto a translucent, illuminated plastic “canvas.” It sounded precious on paper but it ended up being fascinating, mainly because of the craftsmanship displayed on both ends. Cline’s looping drones were plenty abrasive but not grueling; he seemed to know how long to go on molding feedback and when to break up the storm with rhapsodic, crystalline chords. Wisdom was as much artisan as artist, using idiomatic techniques and craft tricks to quickly unfurl one image after another. At first his work was visually thrilling but seemed indeterminate-ritualistic and shamanlike one minute and sexualized the next-but after awhile some thematic images emerged: Spewing oil towers swallowed up the ocean and the earth while a capitalist dandy hoarded the cash.

With his Artificial Afrika, guitarist Vernon Reid worked into punishing syncopated sound collages, but overall his project bowed under the weight of technology. Charlie Hunter was his in-the-pocket, unpretentious self, performing hook-filled highlights off his most recent group album, Gentlemen, I Neglected to Inform You You Will Not Be Getting Paid, in a trio with drummer Eric Kalb and bass-trumpeter Michael R. Williams. The addition of a guest tap dancer Hunter knew from his busking days brought down the house more than once. Over at Zinc Bar, the remarkable guitarist Nguyen Le evoked Bill Frisell, the Black Rock Coalition, Hendrix and David “Fuze” Fiuczynski, often within the same tune. With saxophonist Rudresh Mahanthappa in tow, his band also brought to mind Chris Potter’s Underground with Adam Rogers.

There were also examples of what appeared to be jazz people playing at pop, and instances of bands growing together, paring down and improving. At last summer’s Undead Jazzfest, a warm-weather incarnation of Winter Jazzfest, Ben Perowsky’s Moodswing Orchestra was freewheeling and fun but not that focused. This time out, during a set scheduled for 2:15 Sunday morning, it resembled a working rock band in spirit; Perowsky and Danny Blume on guitar and electronics negotiated an impressive variety of grooves underneath nimble, speedy rapping from emcee TK Wonder. At its most interesting the enterprise imagined a fusion of krautrock and hip-hop: the driving, stealth rhythms of Neu! upholding Wonder’s combination of Def Poetry-style lyrics with an Amanda Blank attack.

Jason Lindner and NOW vs NOW’s meld of konnakol, ’70s-era jazz-rock and live-electronica rhythm was flooring. There are similar acts, like the New Deal, who explore the band-as-DJ aesthetic from within the jam-band scene; Lindner’s trio worked on another level of tightness and virtuosity, making an argument for jazz training in any genre. The crowd loved it, including those who seemed less interested in Panagiotis Andreou’s bass technique and more into what was on draft. And that’s OK, or at least it should be.

“It’s time to imagine a place where we can come together,” Danilo Pérez said from the hallowed stage of Washington, D.C.’s historic Sixth & I … END_OF_DOCUMENT_TOKEN_TO_BE_REPLACED

At the Zeiders American Dream Theater in Virginia Beach, Va., between April 8 and 10, the Vocal Jazz Summit convened in person for the first … END_OF_DOCUMENT_TOKEN_TO_BE_REPLACED

The Big Ears Festival returned to Knoxville in a big way in late March, drawing an estimated 30,000 music enthusiasts from across the U.S. and … END_OF_DOCUMENT_TOKEN_TO_BE_REPLACED

Let’s get this out of the way: The Savannah Music Festival is not a jazz festival. Held over the course of 17 days in late … END_OF_DOCUMENT_TOKEN_TO_BE_REPLACED