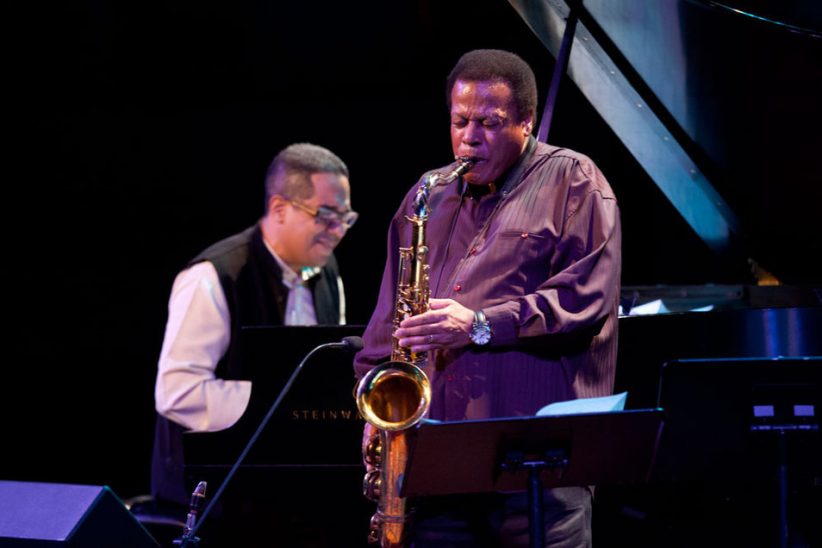 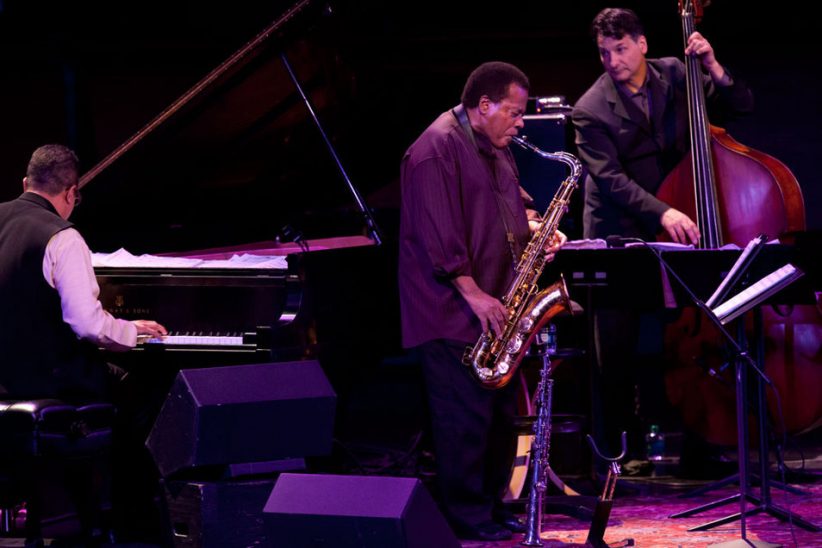 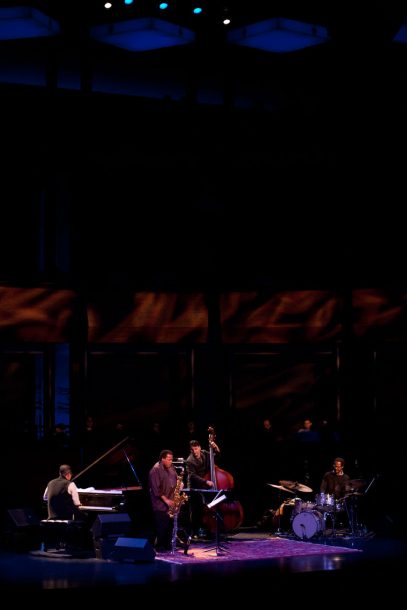 Wayne Shorter’s April 28 appearance at Jazz at Lincoln Center’s spacious, 1,200-seat Rose Theater was greeted by an air of anticipation. For neophytes and members of the subscription audience, it was a chance to lay eyes on a living legend: a former member of the Jazz Messengers during what was arguably its most potent phase, an alumnus of the second great Miles Davis Quintet, and a co-founder of Weather Report, the preeminent fusion band of the ’70s. Truly, there aren’t but a few as iconic as he still walking the earth.

But for the vast majority of this sold-out crowd, which included an inordinate number of working musicians on the New York scene, it was more a thing of, “What’s Wayne up to now?” Given his capacity for change and his mercurial nature-his embrace of static drum programming and slick pop production values on 1986’s Phantom Navigator was as surprising as his return to acoustic jazz on 2002’s Footprints Live!-you never know with “Weird Wayne,” as he was known as a young musician making his way in Newark, N.J. Considering, though, that it had already been announced well in advance that Shorter would be performing with his longstanding quartet of pianist Danilo Pérez, bassist John Patitucci and drummer Brian Blade, the expectation among the cognoscenti was that things would probably flow organically and abstractly, as has been the modus operandi of this remarkably flexible, near-telepathic band for the past 12 years.

Shorter turns 79 this August, though you’d probably guess his age to be at least 10 years younger from looking at him. Dressed in black and sporting jet black hair (hmmm), he strolled onto the stage with his usual Cheshire grin, briefly eyeing the audience before picking up his soprano sax and engaging in a pointillistic cat-and-mouse demonstration with Pérez’s piano, which Patitucci and Blade underscored with sparse accompaniment. At this point, Shorter was toying with the audience, just taking the temperature of the room with his empathetic bandmates. There was a brief moment when he put his soprano to his mouth and blew four notes that didn’t sound quite right to him. He tried adjusting the mouthpiece to no avail, then put the straight horn back on the stand and picked up the tenor, playing it in the high register.

Clearly, they were winging it at the outset, resorting to their instincts and relying on their complete trust in one another to make something out of nothing. And just as clearly, Shorter was a participant in this game rather than the leader. This pure musical democracy seemed to lack an alpha dog who could show the way, just as Miles had done with all of his bands. Instead, in Zen-like fashion, Shorter let the drama unfold.

Blade is brilliant at this kind of intuitive playing. An uncanny listener, he can shape the dynamic of any band he takes the stage with, be it Joni Mitchell, Daniel Lanois, Black Dub, his own introspective Mama Rosa project or the Wayne Shorter Quartet. And he did so at the start of this set, with myriad colors and textures, using mallets, bare hands on cymbals and sticks on rims, executing all these techniques with an uncommonly gentle touch. If Shorter is constructing a Sistine Chapel of sound with his music, Blade is painting its ceiling.

Following several minutes of amorphous noodling, the four explorers finally dug into a groove that hung on Patitucci’s hypnotic ostinato, and they collectively took off for parts unknown with rare authority. As the energy level spiked, Blade turned from elfin accompanist to beast. His explosive crash cymbal punctuations came from out of nowhere like quick martial arts blows delivered with an economy of movement; he practically mugged his snare drum with vicious whacks at the peak of a collective crescendo. Patitucci’s strong resolve to anchor these frantic proceedings with a less-is-more approach was commendable. As someone possessing such incredible facility on the upright bass, it would have been easy for him to double-time the tempo and fly up into the high register of his low-end instrument with mondo chops ablaze, joining in on the turbulent flurries. Instead, he held his fire, anchoring the dizzying fusillades with deep grooves in perfectly complementary fashion.

Shorter’s musical connection with Pérez provided the harmonic intrigue throughout the free-flowing set. Rather than comping in the syncopated fashion of a traditional postbop pianist, Pérez massages tender arpeggios and clipped ostinatos behind the leader’s melodic flights, occasionally tweaking his direction with a well-chosen bit of dissonance or surprising reharmonization. The two have a special, indelible hookup. At one point, as Patitucci and Blade dropped out, Shorter and Pérez engaged in a delicate, chamberlike duet that had the leader alternately summoning up precious fragments of melody and swooping into the stratosphere on soprano sax.

On this magical night, Shorter played more notes on his tenor sax than I had heard him play in the past five outings I caught combined. The noodling overture at the outset was soon overshadowed by his heroic blowing, which built like an arc throughout the set, subsiding with gentle whole tones at the conclusion. Along the way, they touched down on at least a couple of themes (I detected a bit of “Joy Ryder” and a taste of “Over Shadow Hill Way,” both used as springboards into heady, freewheeling improvisations). For an encore, Shorter and his crew surprised us all with a lovely reharmonized reading of Irving Berlin’s “All by Myself.”

What to make of this abstract music? Is it chamber-jazz? Is it avant-garde? It is difficult listening to be sure, but also imbued with streams of luminous melodies from Shorter’s horns that satisfy and delight. There is a definite sonic architecture involved, at times breathtakingly beautiful, at times mercurial and unpredictable. It’s all part of an inspired an unspoken vocabulary that Shorter and his crew have honed together over a dozen years. And it takes a different path every night.

Among the many physical, spiritual, and institutional losses related to the still-ongoing pandemic is that of Los Angeles’ renowned Playboy Jazz Festival (PJF) at the … END_OF_DOCUMENT_TOKEN_TO_BE_REPLACED

It’s difficult to imagine what the stage and the audience would have looked like at Gaillard Center in Charleston, South Carolina, if Rhiannon Giddens’ new … END_OF_DOCUMENT_TOKEN_TO_BE_REPLACED

“It’s time to imagine a place where we can come together,” Danilo Pérez said from the hallowed stage of Washington, D.C.’s historic Sixth & I … END_OF_DOCUMENT_TOKEN_TO_BE_REPLACED

At the Zeiders American Dream Theater in Virginia Beach, Va., between April 8 and 10, the Vocal Jazz Summit convened in person for the first … END_OF_DOCUMENT_TOKEN_TO_BE_REPLACED