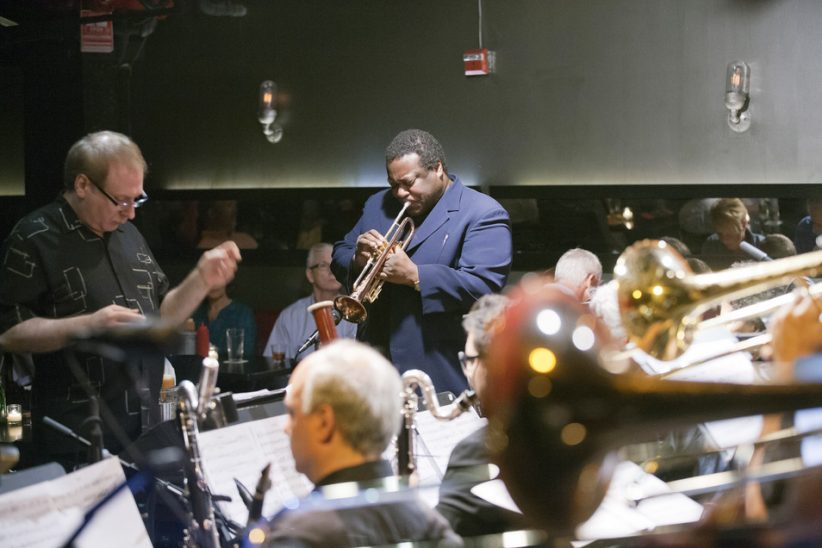 On the fourth and last disc of the Columbia/Legacy box set Miles Davis & Gil Evans: The Complete Columbia Studio Recordings, there are four takes of a semi-surreal Gil Evans composition called “Falling Water.” David Weiss, accomplished trumpeter and arranger, drew my attention to this 1968 obscurity during a break at Jazz Standard in New York, where he’d just conducted the 23-piece Wallace Roney Orchestra in a revelatory performance.

The band’s mission during this four-night run was to premiere Wayne Shorter’s “Universe,” a long-form work written for the hallowed late-1960s Miles Davis Quintet (plus orchestra) but never played. In fact, Roney’s second Thursday set (July 27) featured no fewer than three unknown Shorter compositions: “Legend” and “Universe” from the same time period, plus “Twin Dragon” from 1981, also written with Miles Davis in mind. (No titles were announced from the stage.)

As Weiss later explained, Gil Evans’ instrumentation on “Falling Water” is very close to what Shorter used on these recovered pieces. Clearly Shorter was taken with Evans’ unorthodox palette of flute and alto flute, French and English horns, tuba, bassoon, mandolin, Hawaiian and electric guitar, marimba/timpani and harp. Shorter himself joined the “Falling Water” ensemble on tenor saxophone, along with the rest of the Miles Davis Quintet: pianist Herbie Hancock, bassist Ron Carter and drummer Tony Williams, with Davis’ improvising trumpet in the foreground.

The Wallace Roney Orchestra looked a little different: no guitars, mandolin, harp, tuba or mallets, but yes to the flutes, French and English horns and bassoon, plus violin, clarinet and two bass clarinets. The trumpet, trombone and saxophone sections brought the texture closer to a big band. And players from Roney’s own small group, including Rashaan Carter on upright bass and the devastating Kush Abadey on drums, lent the music a driving improvisational force. This material from 45 years ago, orchestrated by Shorter himself, sounded like tomorrow. “We still haven’t caught up to it,” Roney told the crowd at the outset. “Even [Shorter] hasn’t caught up to it.”

Roney stood sideways just off the bandstand and blew the house away. Little doubt this was some of the finest playing of his career: fast and fluid, aggressive, pushing the ensemble but also getting out of its way. Only two other soloists emerged: Ben Solomon, from Roney’s quintet, who stood up next to the leader and played inspired tenor sax on “Twin Giant”; and pianist Victor Gould, who doubled on Rhodes all night and ventured a serious acoustic solo on “5/4.”

Here was another mystery piece, this one by Gil Evans, known provisionally as “5/4” and never before heard. What made it unique was the silence of the orchestra for longer periods, allowing a supple and fierce small-band sound to fill the room. It brought to mind the spirit of Shorter’s current quartet.

The pieces ranged from roughly seven to 15 minutes or more, with “Universe” being the longest. There were turbulent groove episodes that recalled the Miles Davis of Filles de Kilimanjaro or later, and tough unison passages that leapt out like the ones Shorter used to play with Joe Zawinul in Weather Report.

“Legend” began with flowing mixed-meter development, moved into pure Third Stream writing for the winds and built up to a dramatic series of stabs and silences from the full band. “Universe” relied on a motive of beguiling low-reed trills and seemed to make brief reference to “Sanctuary,” the Shorter piece from Bitches Brew. The tight execution and subtle dynamic contrasts were all there, thanks in no small part to David Weiss with the proverbial baton. It can’t be easy to nail down the funky broken-up lilt of Palle Mikkelborg’s Aura, the final number, but Weiss and crew did it.

This newly discovered music puts Shorter’s recent collaborations with Imani Winds and the Orpheus Chamber Orchestra into fuller context. Rather than a late-career departure, Shorter’s new works build on concepts he was exploring during his time with Miles Davis-and also during his most influential period on Blue Note Records. In its way, the Wallace Roney Orchestra tied the history together, not least by putting such veterans as Steve Turre, Clifton Anderson and Vincent Chancey onstage with Gould, Solomon and other young guns. Their sound, fresh and uninhibited, made a strong case for the health and continued promise of the music.

“It’s time to imagine a place where we can come together,” Danilo Pérez said from the hallowed stage of Washington, D.C.’s historic Sixth & I … END_OF_DOCUMENT_TOKEN_TO_BE_REPLACED

At the Zeiders American Dream Theater in Virginia Beach, Va., between April 8 and 10, the Vocal Jazz Summit convened in person for the first … END_OF_DOCUMENT_TOKEN_TO_BE_REPLACED

The Big Ears Festival returned to Knoxville in a big way in late March, drawing an estimated 30,000 music enthusiasts from across the U.S. and … END_OF_DOCUMENT_TOKEN_TO_BE_REPLACED

Let’s get this out of the way: The Savannah Music Festival is not a jazz festival. Held over the course of 17 days in late … END_OF_DOCUMENT_TOKEN_TO_BE_REPLACED