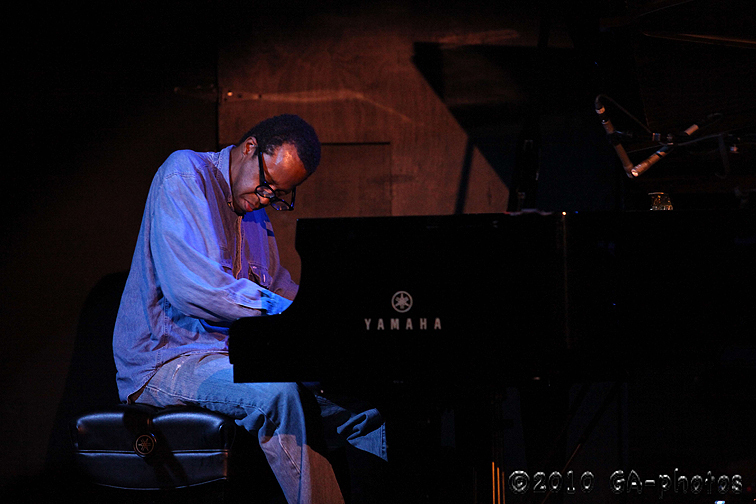 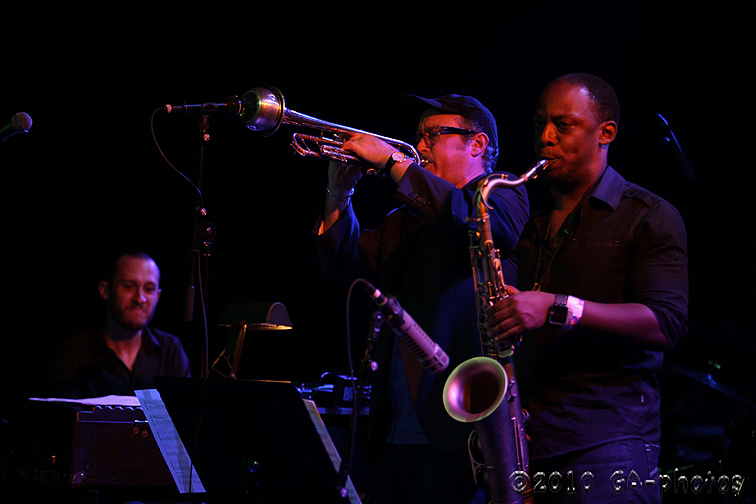 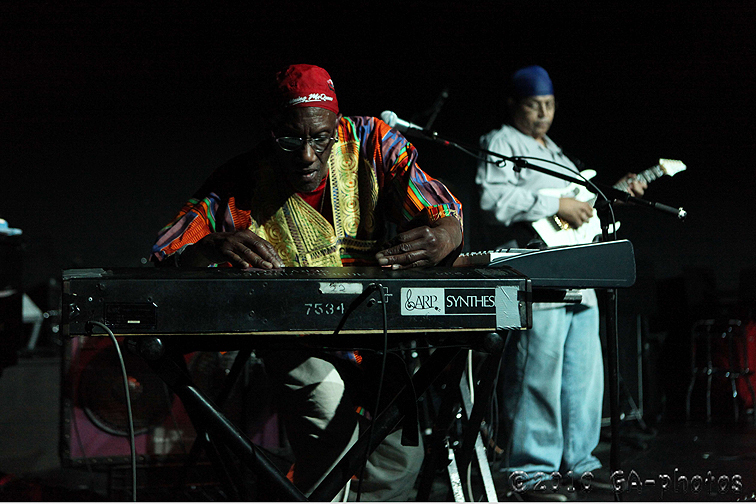 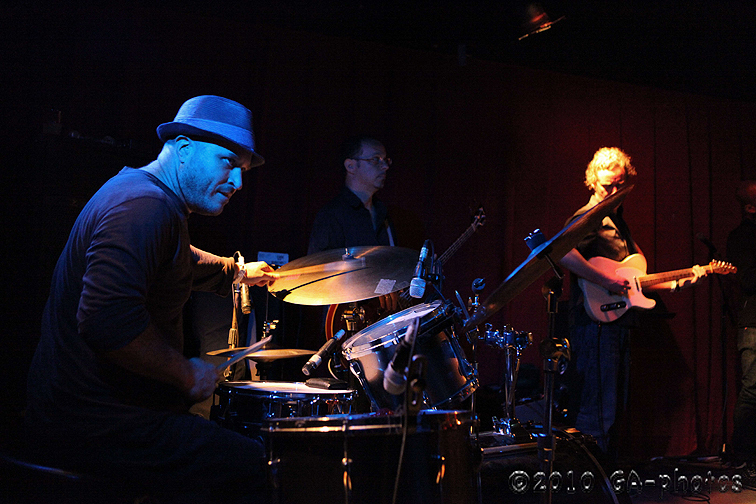 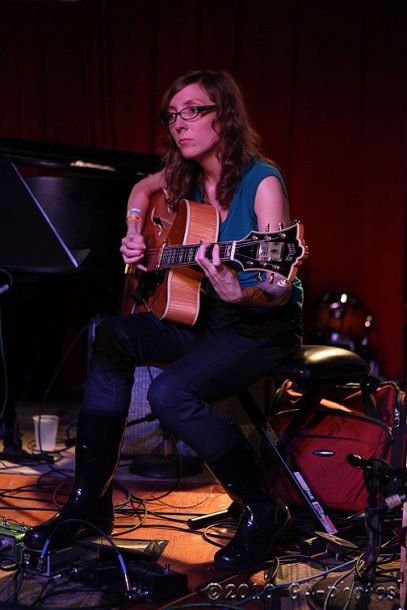 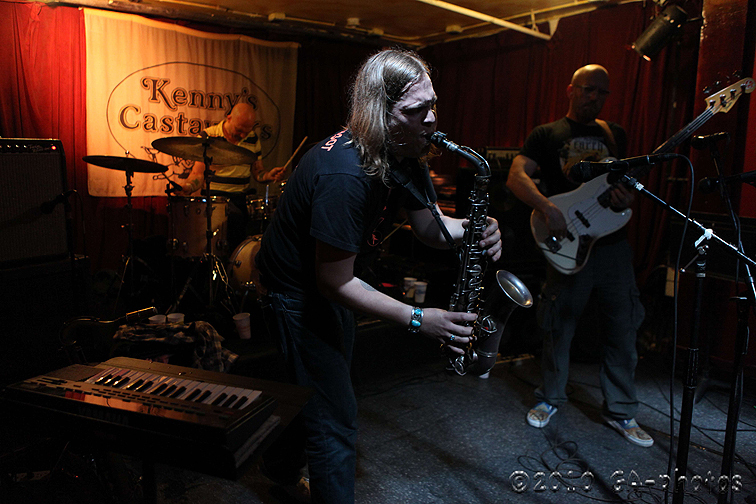 There was often a general swelter inside three West Village venues-Sullivan Hall, Kenny’s Castaways and Le Poisson Rouge-on Saturday and Sunday night. Part of that sticky, Amazonian air could be chalked up to the weather outside (it was hot in Manhattan last weekend), or air-conditioning systems still gearing up for summer. But a lot of it could be attributed to bodies: quite a few of them, mostly young, in the same place at the same time, filling in nooks as in a rush-hour subway car or a standing-room rock concert. They were vying for better sightlines at the Undead Jazzfest, a deftly programmed event that presented its acts showcase-style, one per hour; they paid 25 or 30 dollars for entry, and they got more than their money’s worth with 36 scheduled groups.

The music worked in the anything-goes paradigm of modern creative, or with a wide-open playing field that looked toward the loft era. Still, there were unifying principles: adventurousness, sure, but also accomplishment. Not just virtuosity, which easily can turn into a conceit, but studied musicianship at the mercy of an idea (or two or three). Even with how advanced everything seemed (technically, conceptually or both), many of these acts were easy to love. The most imposing music-trumpeter David Weiss’ expansive postbop; Steve Coleman’s algebraic cadences; the Carnatic labyrinths of the Miles Okazaki/Dan Weiss duo-was also some of the most enticing.

There were fusions of jazz elements and contemporary music that felt familiar. A compact version of drummer Ben Perowsky’s Moodswing Orchestra worked urging, sprawling grooves despite some technical distractions, receiving a boost whenever the guest MC, TK Wonder, offered her rapid-fire rhymes. With his Keystone group (sans turntables), Dave Douglas played new music written for a film by Bill Morrison, encouraging the audience to “imagine a narrative of [their] own devising.” That might imply that the music was ponderous or purely atmospheric; it wasn’t, though it did contain all sorts of interesting textures, especially from the group’s percussion-minded keyboardist, Adam Benjamin. With two formidable soloists in Douglas and saxophonist Marcus Strickland, the set was instead mostly impellent and tangible; it existed directly between the reverberating jazz-rock of Bitches Brew and the tricky meters and forms employed by Chris Potter’s Underground. Bernie Worrell and SociaLybrium began its set with big-riff-toting funk-metal, bolstered by the Rollins Band rhythm section of drummer Sim Cain and bassist Melvin Gibbs. BRC guitarist André Lassalle played an instrument designed by super-shredder Steve Vai, and his style followed suit. (Dated, sure, but fun.)

There were age-old formats doing next-level work. Fight the Big Bull, a precocious, homegrown little-big-band from Richmond, Va., played singularly American-sounding music-not just American as in jazz and the avant-garde, but American as in Southern: soul, country, the blues, The Band. (During the Thirteenth Assembly’s set, an untitled piece by Taylor Ho Bynum, with its loping cowboy rhythm and Jessica Pavone’s fiddle, was a similarly inventive recasting of Americana.) John Hollenbeck’s Large Ensemble suggested an ideal of big-band postmodernity, playing the leader’s heady compositions and arrangements but also showcasing the bandleader as a powerhouse drummer. On “A Blessing,” Ensemble vocalist Theo Bleckmann’s range and the crystalline quality of his instrument were staggering. Marc Cary’s Focus Trio with the underrated drummer Sameer Gupta seemed to hold eclecticism as an aesthetic value. There were tabla solos, classical reinvention and even earnest swing, sometimes with Cary on Fender Rhodes. The trio took on Jackie McLean’s “Appointment in Ghana” and “Minor March,” but it wasn’t the only instance of repertory throughout a festival otherwise devoted mostly to original composition.

If you paid attention you could have caught “Fly Me to the Moon” in Matthew Shipp’s performance, which provided a brief reminder of how important he has been to jazz’s rich tradition of solo-piano improvisation. There are touchstones Shipp evokes, however unintentionally-Keith Jarrett’s lyricism and willingness to return to melodic motifs after inspired detours, Cecil Taylor’s fun-to-watch physicality-but his voice is surely his own. A repertory band that transcended that terminology was the Steve Lacy-indebted Ideal Bread, led by baritone saxophonist (and former Lacy student) Josh Sinton. In the songs and the performances there was the terrific balance of history and experimentalism that marked Lacy’s school of the avant-garde. “The Dumps”-which Sinton explained came about after Lacy tried to write a blues for a week, with little success-meshed jaunty frontline bop playing with Dadaist shouts and yelps of the title. Happy Apple, a trio with drummer David King, saxophonist Michael Lewis and bass guitarist Erik Fratzke, exercised its own brand of hipster irreverence, but also played very strong music. They had enough respect for bop to play well in the style, but were devoted at the top of the set to a delightful and unassuming tack they’ve refined over a surprising number of albums: King played straight rhythms, Fratzke offered agile, tuneful basslines like murmurs or lullabies, and Lewis blew wispy, melodic sax. Some of the entertainment here had to do with the disconnect between how Lewis looked and how he sounded: a free-jazz skronker or R&B bar-walker in his movements and facial contortions; a punk-jazz incarnation of Stan Getz or Paul Desmond in his gentle, winding lines. (With a similar juxtaposed quality, King’s attack was physical yet light, as if throwing fake punches.)

As could be expected at such a low-key event catering to New York’s hardcore jazz community, the scene was probably the main event; sometimes, as when the Kenny’s Castaways doorman let in a few loud, out-of-place drunks during the Alan Ferber Nonet’s set, that scene was infiltrated. But for the most part the nearby meat-market bars kept to themselves and the musicians, many of whom performed with multiple groups, felt comfortable enough to do things they may or may not try at Jazz Standard. Madcap drummer Ari Hoenig wore a knit skull mask during at least two performances, and Craig Taborn allowed his synthesizer to play through its pre-recorded track of Wham!’s “Last Christmas” during an improv set with King and Tim Berne. Organizers estimate 1,600 attendees on Saturday and Sunday, including paid attendees but also bands and press; that all-inclusive number is the one that makes the most sense given how integrated a hang this was.

The event was the product of two young New York-based concert producers, Brice Rosenbloom and Adam Schatz, the latter of whom recently graduated from NYU. Jazz is never at a loss for young talent or youthful critics, but it could use more organizational types to present the music creatively and professionally, and without institutions and corporations boxing the programming into repertory acts or token awards ceremonies. There was a lot of promise radiating from the Undead fest, and the pair’s entrepreneurial fervor wasn’t the least of it.

“It’s time to imagine a place where we can come together,” Danilo Pérez said from the hallowed stage of Washington, D.C.’s historic Sixth & I … END_OF_DOCUMENT_TOKEN_TO_BE_REPLACED

At the Zeiders American Dream Theater in Virginia Beach, Va., between April 8 and 10, the Vocal Jazz Summit convened in person for the first … END_OF_DOCUMENT_TOKEN_TO_BE_REPLACED

The Big Ears Festival returned to Knoxville in a big way in late March, drawing an estimated 30,000 music enthusiasts from across the U.S. and … END_OF_DOCUMENT_TOKEN_TO_BE_REPLACED

Let’s get this out of the way: The Savannah Music Festival is not a jazz festival. Held over the course of 17 days in late … END_OF_DOCUMENT_TOKEN_TO_BE_REPLACED