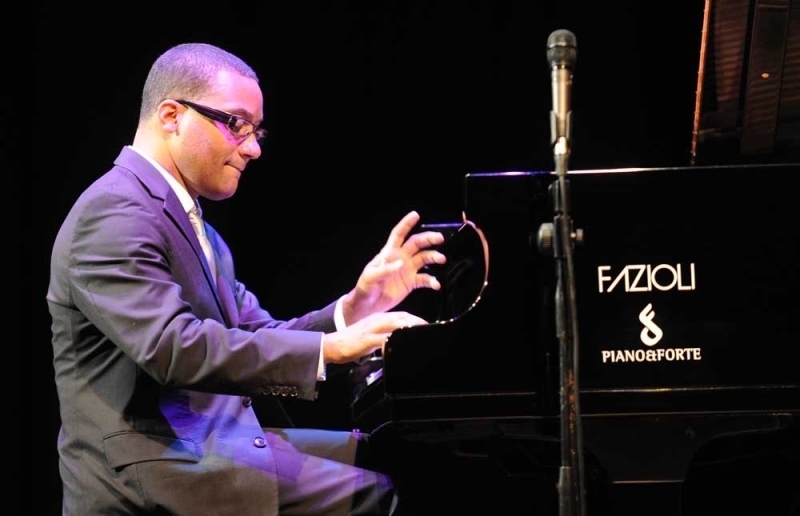 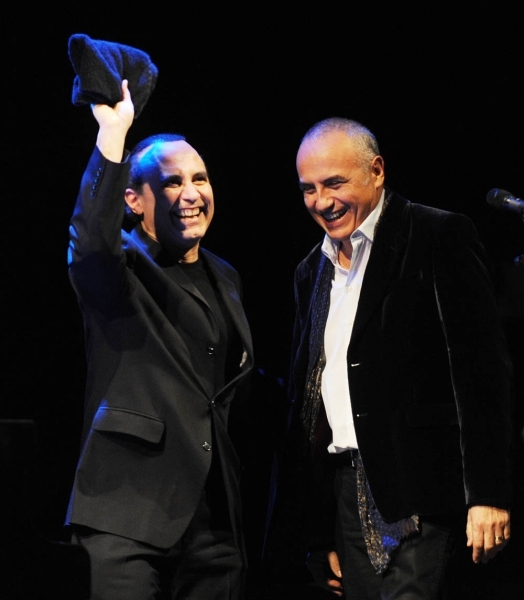 When it comes to jazz, Orvieto ain’t Perugia. They are both equally picturesque towns an hour apart in the province of Umbria, the verdant heart of Italy. And both boast of a history that pre-dates Roman antiquity. But the festivals that either city hosts-the winter and summer editions of Umbria Jazz, respectively-are two entirely different approaches and experiences. They also represent the steady dedication of the jazz fan and former haberdasher who started both, Carlo Pagnotta.

“I don’t have to book an arena!” Pagnotta says with a laugh, when asked to summarize the difference between the two seasonal festivals. From his perspective, the summer festival in Perugia is one filled with non-jazz distractions-negotiating fees with rock and pop music booking agents, juggling various levels of acts, dealing with a host of sponsors. Orvieto, on the other hand, is a much smaller city (population 20,000 versus Perugia’s 170,000) with fewer venues; its festival lasts for five days (versus Perugia’s 10) drawing an average of 35,000 people (Perugia normally pulls in over 100,000 each summer). Its festival focuses more on jazz alone, in all its stripes.

As such, Umbria Jazz Winter, its official name, is the more intimate and relaxed experience for festival-goers and musicians alike. Its smaller scale affords Pagnotta the opportunity to pay closer attention to bookings both large and small, like a series of rare bass duet performances featuring John Clayton and John Pattitucci in 2009. “The two of them together were incredible. Every night the music was great,” Pagnotta recalls in his Umbrian accent. “We could not do that in Perugia and have the room packed for four nights in a row. There is too much going on, too much other kind of stuff and a different kind of audience that is coming for the big concerts like Prince and Santana.”

Pagnotta and jazz have been working together a long time. Born in 1933, he grew up the son of a famous restaurateur, and opened a high-end clothing store specializing in British styles (Sir Charles; it recently closed). It was his continuing affair with music that came to define him. By the mid-’50s, he was founding member of an important jazz organization, Hot Club Perugia, meeting in a small café in Perugia’s Piazza della Repubblica. He was booking concerts by Louis Armstrong and Chet Baker, and later traveled Europe, meeting his heroes, like Bud Powell in Paris. Back home, in 1973, he corralled government and private support to establish the first Umbria Jazz festival, serving as its artistic director, a role he continues to occupy to this day. The formula combining the backdrop of bountiful Italy (the history, the pasta, the wine) with top musical talent was a hit from the start; the annual event was soon a jewel on Europe’s summer touring circuit, for jazz and non-jazz artists alike, on a par with Claude Nobs’ annual jazz festival in Montreux, and a few others. Twenty years later, on the urging of Orvieto’s mayor Stefano Cimicchi, Pagnotta expanded the idea to another of Umbria’s beautiful hilltop towns.

Fast-forward another 19 years to the most recent presentation of Umbria Jazz Winter, which ran from December 28, 2011 through January 1, 2012. The program, at first glance, appeared a bit confined in its thematic range than in the past (Italian jazz elite and Latin pianists for the large part), and most artists were booked to play multiple shows. The lack of the legends was obvious: No Herbie or Sonny. No McCoy or Chick. One could not help wondering if the hard touch of Eurozone’s current economic crisis, with things especially grim in post-Berlusconi Italy, was in play.

But there had been sunny news that Pagnotta had landed the British Virgin Islands as a new sponsor. And, as an American enjoying the Orvieto experience for the first time, what some may have viewed as limitations in the booking I found to be an overall positive. The festival’s tightness of focus made headliners out of local and deserving talent, and afforded the chance to catch each a few times. (It hit me later that, while touring artists usually pop in and out of most festivals, almost all the groups performing at Umbria Jazz Winter were on hand for its entire run.)

One who impressed and benefited from this expansive idea was Paolo Fresu, the trumpeter and flugelhorn player partial to ancient folk melodies of his native Sardinia as well as the use of electronic effects. He played three gigs that showed off a lyrical touch and playful rhythmic feel: jamming with his acoustic quintet; showing off a tender ballad-driven side with a small orchestra; and, on the last night of the festival, performing with both his quintet and a string quartet.

Another with varied appearances was Michel Camilo, whose piano propulsions thrilled with two exciting solo sets, and a special duet with Italian pianist Danilo Rea. The collaboration was particularly revealing: the two ably bouncing ideas back and forth through a number of modern jazz chestnuts, and a take on the old Neapolitan melody “O Sole Mio” that could have continued for another 10 minutes. On his debut solo night, Camilo brought his 70-minute set, filled with muscular rhythmic playing and breath-taking tempos, to a surprising, effective close: a gentle, nuanced version of a Gershwin piano work (“Prelude No. 2”) that minimized embellishment, raising its emotional impact exponentially. It was like being knocked over by a feather.

Another unexpected delight was catching multiple sets by Gonzalo Rubalcaba with bassist Matt Brewer and drummer Marcus Gilmore, arguably one of the most flexible and captivating piano trios on the road today (certainly one of the best exponents of the Bill Evans school of integrated introspection and precision). They run the risk of seeming too subdued at times but there’s so much going on-and between-the three to avoid being drawn in, and satisfyingly so. To hear them on three consecutive evenings was to feel that same subtle pull at the outset, then enjoy performances of different moods and spontaneous surprises each time.

Other noteworthy pleasures that Orvieto hosted the last few days of 2011 included a number of tributes:

• The young Argentinean bandoneonista JP Jofre teamed with a local, 11-piece string section to celebrate the songbook of the late, great Astor Piazzolla. Interestingly (and logically) the set’s one original, a tango written for his mother, seemed to best reveal Jofre’s signature, expressive sound. Given his technique and fluidity on an instrument that challenges the best, his development is one worth following.

• Pianist Chano Dominguez, with bass, drums, a flamenco singer and dancer, offered polyglot versions of the five tracks of Kind of Blue, replacing the melancholic disposition of Miles Davis’ classic with the more driving, folkloric rhythms of Spain. (His appearance was part of the groundbreaking collaborative assocation established just this year between Umbria Jazz and the Barcelona Jazz Festival.) Most enjoyable was simply witnessing the fun-loving camaraderie onstage among the musicians, and their sheer delight in performing. Most compelling of the repertoire was the unplanned encore, “Monk’s Dream,” that revealed Dominguez’s at-home comfort and swing with modern jazz. It made one hunger to hear a more free-spirited choice of tunes.

• Stan Tracey-former house pianist at Ronnie Scott’s, still going strong at 85-played a reverential set of Thelonious Monk tunes with his trio. Knowing that Tracey was such an important figure in the London scene of the ’60s yet who rarely makes it Stateside, the historian in me (and fan of his classic Under Milk Wood), I was thrilled to witness him in action. (I meant to ask Pagnotta if this booking had anything to do with his college days in London. Next time.)

• Trombonist Gianluca Petrella, in what was easily the festival’s most avant-garde moment, paid tribute to famed film composer Nino Rota, reimagining a number of his best-known tracks (“Exodus” and “Amarcord” most memorably) with a septet that included piano, bass, drums, baritone sax/baritone clarinet, a DJ/manipulator of electronic gadgets, and the amazing John DeLeo, whose vocal loops and singing style channel the gritty precision and cartoonish wit of Captain Beefheart. Some interpretations were a bit long-winded, but it was engaging overall and unexpected in the velvety interior of the Teatro Mancinelli.

• With a simple trio of reeds, bass and drums, saxophonist Pietro Tonolo performed an original four-part suite dedicated to John Coltrane, referencing the famous A Love Supreme motif in its opening and its closing, and generally working off the minor-key mood of Coltrane’s original more than its spiritual intensity. Tonolo, an excellent improviser and composer, followed it with versions of “Mr. Day,” “Giant Steps” and “Naima.” Two local artists, photographer Massimo Achilli and painter Massimo Chioccia, collaborated on an impressionistic video that was projected behind the group during the entire performance. That, plus a collection of Chioccia’s jazz portraiture hanging in the converted church in which the event took place, added to the level of the jazz dedication that is in such strong evidence in Italy.

There were celebratory and spirit-lifting offerings in Orvieto that are typical of today’s jazz festivals, geared for general music-lovers: a daily street parade led by the brass band Funk Off; a concert of spirituals and standards by the Harlem Jubilee Singers; daily sets by a variety of R&B-flavored favorites (many familiar to Perugia festival-goers as well): singer/guitarist Allan Harris; Bobby Broom and his Deep Blue Organ Trio; pop/R&B singer Nick the Nightfly; local jump band the Good Fellas; etc. There were head-scratching moments as well, like the festival opener, a tribute to pop singer Adriano Celentano, a kind of Italian Bobby Darin. It featured singer/actor Peppe Servillo plus an able jazz quintet with talents exceeding the material. Who can argue with a sold-out show and crowd-pleasing sing-alongs? It was an Italian thing; I sort of understood.

Umbria Jazz Winter has been discussed here before, focusing on the music as well as the town’s historic splendor or its gastronomic delights; I have yet to eat a disappointing or even average meal in any Orvieto restaurant. Its world-famous cathedral, Il Duomo, is a must-see on the order of the Tower of Pisa, with its distinctive black-and-white stripes and a huge, bas-relief façade depicting some pretty R-rated scenes of the Last Judgment.

Orvieto in the week after Christmas is an experience that is about music and so much more. Building up to a jazz-filled New Year’s Eve and ending on New Year’s Day, it is arguably the only festival of its scale incorporating a major international holiday. Walking through the crowded, smoothed cobblestone streets of that town (a nightly ritual involving all locals, it seems), and despite speaking the most basic Italian, I could not help but grasp how the spirit of the season mixed in so well with a series of well-planned music performances, in a town that was so naturally warm and accessible (it helped that it only rained one evening during the entire run).

This year, other than many of the musicians, I did not meet any Americans in attendance. I hope that changes because Umbria Winter is truly an experience that any seasoned festival-goer would appreciate, refreshingly different in range and character from not only its sister festival in the summer, but almost any other.

It’s difficult to imagine what the stage and the audience would have looked like at Gaillard Center in Charleston, South Carolina, if Rhiannon Giddens’ new … END_OF_DOCUMENT_TOKEN_TO_BE_REPLACED

“It’s time to imagine a place where we can come together,” Danilo Pérez said from the hallowed stage of Washington, D.C.’s historic Sixth & I … END_OF_DOCUMENT_TOKEN_TO_BE_REPLACED

At the Zeiders American Dream Theater in Virginia Beach, Va., between April 8 and 10, the Vocal Jazz Summit convened in person for the first … END_OF_DOCUMENT_TOKEN_TO_BE_REPLACED

The Big Ears Festival returned to Knoxville in a big way in late March, drawing an estimated 30,000 music enthusiasts from across the U.S. and … END_OF_DOCUMENT_TOKEN_TO_BE_REPLACED