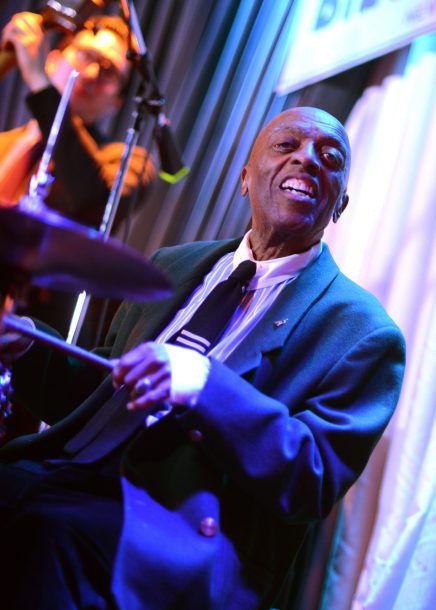 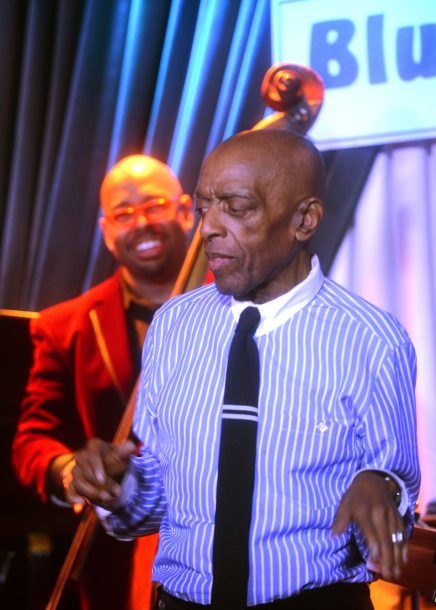 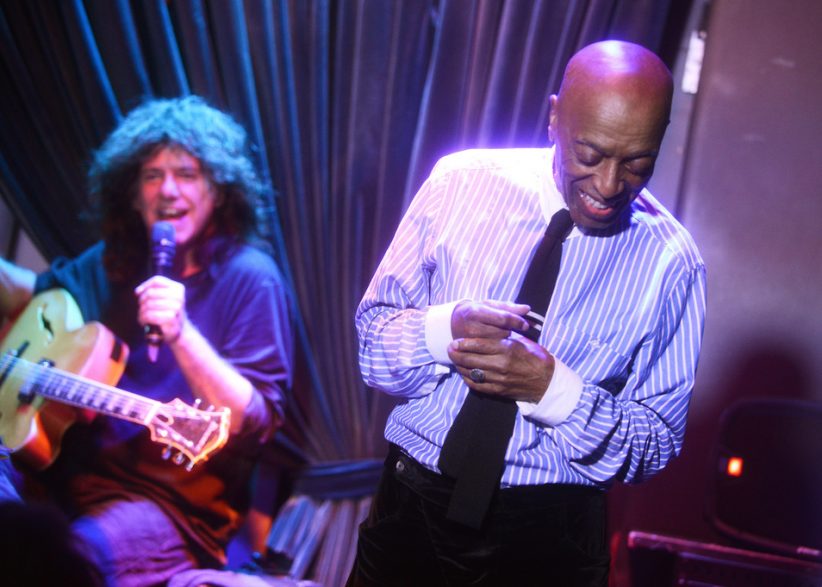 Last Friday, March 13, the innovative and apparently inexhaustible drummer Roy Haynes had the kind of 90th birthday that anybody-or at least any musician-would hope to live to enjoy: surrounded by great players, loving friends and admirers, making soul-stirring music into the wee hours of the morning.

It was the first evening of a three-night celebration at New York City’s Blue Note, where Haynes was accompanied by his nimble Fountain of Youth band (Jaleel Shaw, alto and soprano sax; Martin Bejerano, piano; David Wong, bass). But what made the evening truly a one-off event was the presence of guitarist Pat Metheny and bassist Christian McBride, who replaced Wong for the set’s second half.

Haynes is one of a diminishing number of still-active nonagenarian jazz luminaries, along with bebop greats Jon Hendricks and Bob Dorough. Haynes, of course, has played with almost everyone who’s mattered in jazz since the 1940s, from Louis Armstrong to Charlie Parker (in whose band he played from 1949-1952) to Miles, Coltrane, Dizzy, Stan Getz and many more.

Metheny hardly overstated Haynes’ importance when, as the evening was drawing to a close, he thanked him “for being the most inspiring musician on the planet … and for inventing an entirely new way to play drums.” Haynes, whose career began in the bands of Luis Russell and Lester Young, is the living bridge between swing and bebop drumming; along with Max Roach and Elvin Jones, he expanded the drummer’s role beyond time-keeping and occasional solos to reach a fuller expressive potential.

At 90, the drummer is still leading the way, and the younger cats had better keep up. For the late show-which began when Haynes was good and ready, nearly an hour late-he finally appeared, dressed to kill, as usual, in a blue-and-white striped shirt and black-and-white tie. He immediately began engaging the audience with some oft-repeated shtick: singing Kenny Rogers’ “The Gambler,” trying to elicit some call-and-response from the audience, and ending with a tap dance (and a pretty good one at that). Eccentric, yes, but at his age-and especially considering the flabbergasting display of chops that followed-he’s entitled.

Metheny began by laying down a mid-tempo blues, grinning from his perch behind Haynes’ left shoulder. He comped behind Shaw’s alto solo, while Haynes burned and churned, not letting up on his signature ting-tinga-ting ride cymbal, playing with enough energy to power a small town.

The rest of the program, two by Monk and three by Metheny, displayed Haynes’ versatility and tireless flow of ideas. Once he had established the jet-propelled rhythm for Monk’s “Green Chimneys,” the other members were on their own, as Haynes, in the zone, held a rhythmic conversation with them, with an occasional aside-an odd accent or an occasional eruption-that seemed intended just for himself.

The seasoned band needed no guidance, each member spinning phrases and contributing layers of rhythm on top of the deeply felt beat, regardless of what Haynes was laying down. A special nod to Wong: It takes a very confident bassist to stand up to Haynes’ drumming, which is tight and loose at the same time, sometimes precisely “on it,” and other times just a hair behind the beat.

After three numbers, however, Wong ceded the bass position to special guest McBride, perhaps a bassist’s worst nightmare. Later, Wong would get a big laugh from the crowd when he thanked McBride for bringing him back up onstage for a curtain call, saying, “Sharing the stage with Christian is definitely an honor. I don’t know about a pleasure.”

McBride’s command and control were impeccable. When he soloed, during Metheny’s tune “H and H,” he displayed much more than fearsome technique: he has a rare charisma that turns a bass solo into sensational entertainment.

Which brings us to Metheny: when the icon stood for his first big solo, in his own song “James,” smartphones lit up the room as many fans sensed an Instagram moment. On that song and the not-unexpected finale, “Question and Answer,” Metheny unleashed articulate torrents of melody in his unmistakable voice, while Haynes and McBride provided a symphonic bed of rhythm for Metheny to bounce off.

Afterward, a cake was wheeled out, the band played “Happy Birthday” and, just before the last note, on cue, Haynes blew out the candles. When it was over, Haynes seemed reluctant to leave the stage. We should all have so much fun when we’re 90.

The 2022 Newport Jazz Festival’s three days of sunshine were bracketed, more or less, by a pair of all-star ensemble jams that included Christian McBride. … END_OF_DOCUMENT_TOKEN_TO_BE_REPLACED

In its first full edition since the onset of the pandemic, and with a new director of programming, the Festival International de Jazz de Montréal … END_OF_DOCUMENT_TOKEN_TO_BE_REPLACED

Among the many physical, spiritual, and institutional losses related to the still-ongoing pandemic is that of Los Angeles’ renowned Playboy Jazz Festival (PJF) at the … END_OF_DOCUMENT_TOKEN_TO_BE_REPLACED

It’s difficult to imagine what the stage and the audience would have looked like at Gaillard Center in Charleston, South Carolina, if Rhiannon Giddens’ new … END_OF_DOCUMENT_TOKEN_TO_BE_REPLACED