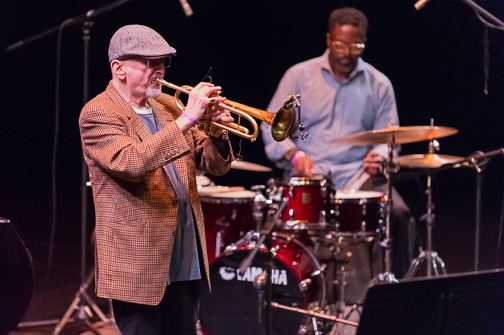 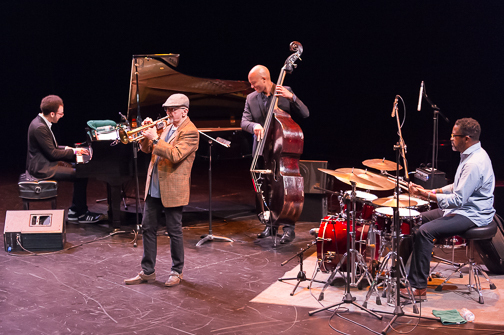 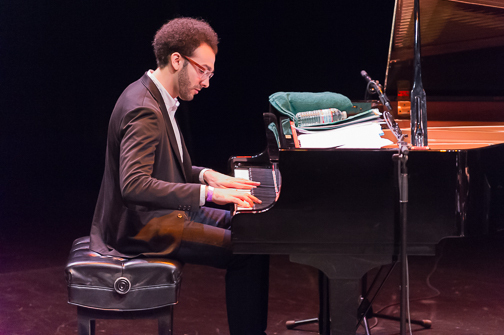 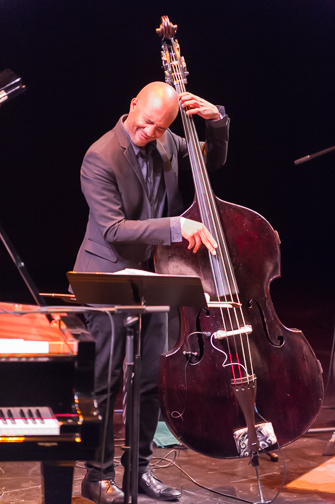 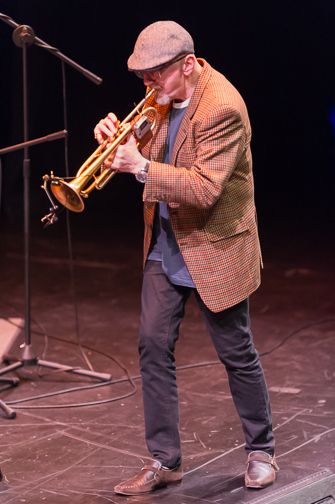 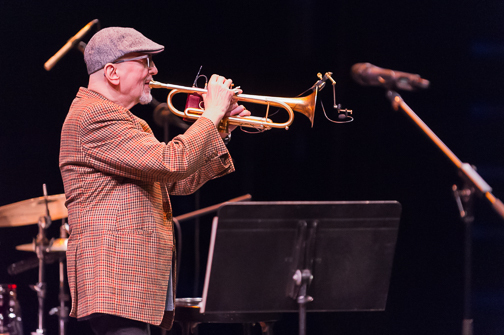 On Saturday, March 28, on a balmy evening following a brilliant blue 85-degree Southern California day, Tomasz Stanko of Poland played the Kirk Douglas Theater in Culver City. The concert was presented by the Jazz Bakery organization, in an ongoing series called the “Movable Feast.” For the organization and the series, there is a backstory.

In 1990, Ruth Price, a jazz singer turned music presenter, opened the Jazz Bakery in the Helms Bakery Building in Culver City, just south of Beverly Hills. Price’s previous experiences booking jazz had involved bars and restaurants in Los Angeles and had left her with a distrust for mixing art with booze and food. She founded the Jazz Bakery as a nonprofit, and created a setting for music as intimate as a club but as civilized as a concert hall. For 19 years, the Jazz Bakery was one of the anchor sites for jazz on the West Coast. Its significance was enhanced by the fact that, in stark contrast to New York, the L.A. megalopolis has always, at any given point in time, contained only a few operational jazz clubs.

The other clubs came and went but the Bakery rolled on. Everybody from Benny Carter to Cecil Taylor played there. Then, in 2009, on very short notice, the Jazz Bakery lost its lease and Price found herself, music-wise, homeless.

Her response to this crisis has been notably resourceful. The Jazz Bakery no longer has a physical home, but it remains a strong, consistent, if itinerant, concept. Price began presenting concerts in borrowed venues in L.A. locales like Hollywood and Santa Monica. She has said, “I book people I want to hear.” Between 2009 and now, there have been over 100 events in the “Movable Feast” series. The list of musicians that Price has wanted to hear is a testament to her taste. It includes people like Jason Moran, Kurt Rosenwinkel, Chris Potter, Stefon Harris and the late Mulgrew Miller. She also brings in new artists like Colin Vallon.

The spaces Price uses are mostly medium-sized and always high-class: The Moss Theater at the Herb Alpert Educational Village. REDCAT, in the Walt Disney Concert Hall complex, designed by Frank Gehry. The Musicians Institute Concert Center. Zipper Hall, at the Colburn School of Music. The Kirk Douglas Theater is in a renovated historic movie palace. Its 317 seats rise in steep rows, creating excellent sight lines, and the acoustics are fine. Stanko filled the house.

He writes melodies that pierce the heart like needles, but he does not exactly write songs. His pieces are open forms, a few strokes or gestures that introduce a mood and set Stanko into motion. He needs musicians around him who can respond with independent creativity to his unique stimuli. His 10-album ECM discography is a body of work that places him with the great trumpet players of the last 20 years. He has recorded with the best rhythm sections in Europe, with people like Bobo Stenson, Marcin Wasilewski, Anders Jormin, Tony Oxley and Jon Christensen. Then in 2008, Stanko bought an apartment in Manhattan and began dividing his time between Warsaw and New York. In 2013, he released a two-CD ECM album, Wisława, his first with a world-class American rhythm section: pianist David Virelles (born in Cuba but now a U.S. resident), bassist Thomas Morgan and drummer Gerald Cleaver. Stanko called the band his New York Quartet.

It was this ensemble that played the Kirk Douglas, with Reuben Rogers, in his very first gig with Stanko, replacing Morgan. In a 90-minute set, they played only two pieces from Wisława, representing the two extremes within Stanko’s modes of expression. The ethereal title track was so slow it barely moved. “Assassins” was a fierce, fast announcement, an anthem that cracked like artillery. The other tunes were all new. Most did not yet have titles. (After the show, Stanko said he is still working on material for his next ECM record.)

His compositions are diverse, yet they are so interconnected that they feel like episodes in the suite of his life. The dynamic swings can be shocking. Ballads suddenly explode. Passionate burners might decelerate into halting, fervent searches. His pieces do not “begin.” It is as if Stanko steps into a river. Neither do they “end,” but rather finally fall away. Between, Stanko plays trumpet lines like no others, outbreaks amid pauses, fragments that aggregate into cryptic, haunting, austere designs. The second tune of the evening, a new piece, nominally a ballad, opened like a hovering in open air, a string of trumpet sighs over Virelles’ portentous tremolos. But by the center of the song the quartet had erupted, Stanko flaring, Virelles landing hard, in broken chords. Cleaver’s solo was an undercurrent of ominous rumbling, spiked by thrusts and detonations. Rogers, who has been such a compelling voice in Charles Lloyd’s quartet, was given generous space of his own in his first appearance with Stanko, and used it to create rich subplots within Stanko’s narratives.

If there is a Stanko composition that could gain currency as a stand-alone work, a jazz standard, it may be “Wisława.” He knew Wisława Szymborska, the Polish poet and Nobel laureate who died in 2012. He collaborated with her in a night of poetry and music at the Krakow Opera in 2009, was inspired by her verse and clearly mourns her loss. “Wisława” was the penultimate piece of the evening. Virelles’ prologue, in meditative chords, was shorter than the two versions on the album, but introduced the enfolding atmosphere. Stanko’s wavering lines were forlorn cries within an immense darkness. Gradually, sadness moved toward affirmation as the melody ascended. No living jazz musician can create a more profound solitude than Stanko. The other players were caught up in that loneliness, Rogers circling through a rapt ritual, Cleaver whispering with brushes. The audience was caught up in it too. The Kirk Douglas Theater was dead quiet except for music like soft calls in the night, and then the music too fell silent.

There is a second part to the Jazz Bakery backstory. Ruth Price always intended the “Movable Feast” series as a temporary solution until she found a permanent home. In that effort, important progress has been made. In late 2010, the Annenberg Foundation announced a $2 million grant as “capital campaign seed money.” The government of Culver City donated a parcel of land adjacent to the Kirk Douglas Theater. Architect Frank Gehry created, and donated, a design for a building to fit that narrow lot. When it opens, the facility should be beyond cool, a miniature West Coast version of Jazz at Lincoln Center. The plan includes an auditorium of approximately 270 seats, a smaller space that Price calls a “black box theater” for specialized musical events, a virtual museum and a small café with a liquor license. Frank Gehry buildings (e.g., the Guggenheim Museum in Bilbao, Spain, and the Experience Music Project in Seattle, Washington) tend to become landmarks and tourist attractions. No doubt the new Jazz Bakery will become a famous destination simply because it is a Frank Gehry design. But it should also become a major stop on the West Coast jazz circuit, and a great place in the world to hear the music.

The question, of course, is when. At the time that the Annenberg grant came in and the land was donated, it was announced that the facility would open in 2012. But in late March of 2015, a large abandoned Victorian house and two huge trees still occupy the lot where the Jazz Bakery will go. Not only has the project not broken ground, it has not torn down the house. It speaks volumes about the brutal challenges of jazz economics: Even with $2 million in seed money, even with donated expensive land, even with a free design by an architect arguably the most famous in the world, fundraising for this project has not been sufficient to move it to completion. The search for support continues. (There was, for example, a reception after the Stanko concert, with invitations extended to potential patrons of the arts.)

Someday there will be a new Jazz Bakery tucked in next to the Kirk Douglas Theater. Until then, we have the “Movable Feast,” and it rocks. Ruth Price’s next two attractions, in April, are John Abercrombie and Fred Hersch.

The 2022 Newport Jazz Festival’s three days of sunshine were bracketed, more or less, by a pair of all-star ensemble jams that included Christian McBride. … END_OF_DOCUMENT_TOKEN_TO_BE_REPLACED

In its first full edition since the onset of the pandemic, and with a new director of programming, the Festival International de Jazz de Montréal … END_OF_DOCUMENT_TOKEN_TO_BE_REPLACED

Among the many physical, spiritual, and institutional losses related to the still-ongoing pandemic is that of Los Angeles’ renowned Playboy Jazz Festival (PJF) at the … END_OF_DOCUMENT_TOKEN_TO_BE_REPLACED

It’s difficult to imagine what the stage and the audience would have looked like at Gaillard Center in Charleston, South Carolina, if Rhiannon Giddens’ new … END_OF_DOCUMENT_TOKEN_TO_BE_REPLACED