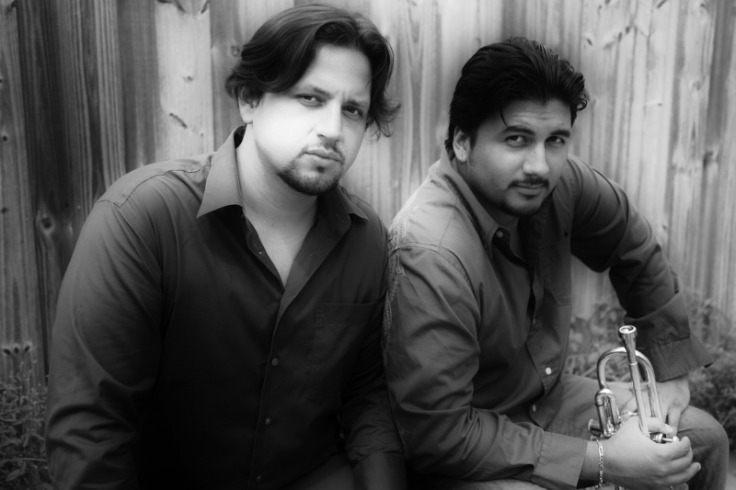 There’s nothing like an in-house support system to inspire artists to great performances, and the Rodriguez Brothers benefited from just such an advantage on the final night of their engagement at Dizzy’s Club Coca-Cola. The siblings’ drummer father was in attendance, as were a pair of Latin-jazz bass legends, Andy Gonzalez and John Benitez. As if the lush environs of the packed 140-seat club, on the fourth floor of the Jazz at Lincoln Center complex next to Columbus Circle, with its picture-view backdrop of Central Park and twinkling Manhattan lights, weren’t inspiration enough.

Pianist Rob Rodriguez sounded the first notes of the set opener, a simmering “Gitmo’s Groove,” which he penned for his dad; trumpeter Mike Rodriguez took the melody. Following a piano solo which included a quick quote of “If I Only Had a Heart,” and a trumpet solo, the tune broke down to a rhythm section groove with bassist John Patitucci and percussionist Pedrito Martinez before rebuilding with Jeff “Tain” Watts’ solo. “Guayaquil,” another Rob Rodriguez composition, a nod to the Ecuadorean hometown of the brothers’ mother (“which makes us Cubadoreans,” he said), opened with Patitucci bowing, then plucking his way into a punchy groove. Rob’s solo was a gem-lush chordings shifted into short question-like phrases segueing into a climb up the keyboard, and some contrapuntal left-hand action; the tune evolved into a feature for Martinez, and closed with a long fade-out.

“Lulu’s Song,” another piece Rob penned for his mom, featured a poignant melody and an extended solo spot for Patitucci, who turned in a slowly unreeling series of artfully linked statements. The oft-recorded bassist is taken for granted too often; live, he remains a show stealer, a virtuoso with a knack for the right lines, every time out.

The remainder of the set was similarly engaging. Mike Rodriguez’s “Rude Awakening,” an uptempo bop burner, offered several tete-a-tete moments: the trumpeter and the pianist-the pianist and the drummer; the bassist and the drummer-and concluded with well-taken open space for Watts. The siblings capped the proceedings with a relaxed take on the Cuban chestnut “The Peanut Vendor,” led by Mike’s elongated notes, with a harmon mute on his trumpet. At one point, the pianist and the trumpeter traded solo lines, shadowing each other, then tracing over each other’s phrases. The Rodriguez brothers’ relationship comes off as musically symbiotic. Thankfully, they let listeners into their world.

Among the many physical, spiritual, and institutional losses related to the still-ongoing pandemic is that of Los Angeles’ renowned Playboy Jazz Festival (PJF) at the … END_OF_DOCUMENT_TOKEN_TO_BE_REPLACED

It’s difficult to imagine what the stage and the audience would have looked like at Gaillard Center in Charleston, South Carolina, if Rhiannon Giddens’ new … END_OF_DOCUMENT_TOKEN_TO_BE_REPLACED

“It’s time to imagine a place where we can come together,” Danilo Pérez said from the hallowed stage of Washington, D.C.’s historic Sixth & I … END_OF_DOCUMENT_TOKEN_TO_BE_REPLACED

At the Zeiders American Dream Theater in Virginia Beach, Va., between April 8 and 10, the Vocal Jazz Summit convened in person for the first … END_OF_DOCUMENT_TOKEN_TO_BE_REPLACED